Week #1 was all about introductions. After dining on pizza and salad, all 52 of us took turns standing and telling about ourselves and why we were there. The attendees were a diverse group of civic leaders, from government officials to bankers, teachers, religious leaders, and business owners. All had noble reasons to participate, hoping to take information back to their neighborhoods, schools, and synagogues to make their communities safer.

And then there was me. The mystery author. I felt totally outclassed. Thankfully, no one else contributed to my lack of self-value. In fact, I’ve had several people say to me, “Oh, you’re the writer!” Suffice it to say, I totally understand why it took three tries to get into this academy, and I appreciate the powers that be who squeezed me in this time.

We also met the special agents (no, there are no “just-plain” agents. They all carry the title SPECIAL agent) and intelligence analysts who will be our speakers and instructors for the next eight weeks. There were a lot of them. 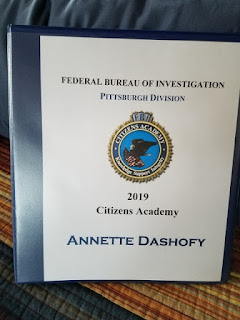 While electronic devices are forbidden (no photos), we did get a three-ring binder filled with bios and history…and a list of acronyms, of which there are many. HOPE? Heroin Outreach Prevention and Education. JTTF? Joint Terrorism Task Force. Just to name two.

With a tease of what was to come, I couldn’t wait until…

Dinner was salad, fried chicken, and pasta alfredo. And cookies. Yeah. They feed us well!

Needless to say, I can’t possibly share all of it, but here are a few of the things that stood out. And a few things that kept me awake the next night.

There really is no such thing as a coincidence.
You’re not paranoid if they’re actually coming after you.
Don’t carry your everyday laptop if you’re traveling overseas, especially to China. They will access every bit of data you have on your electronics. The special agent recommended businessmen rig a special laptop containing only the information needed for that business trip.

The part about crimes against children left me haunted and disturbed. I don’t have kids, but now I’m worried about every child in my family as well as every child out there. When asked what was the most dangerous thing a kid could do, the special agent stated plainly, “Be on the internet.” You may think you know what your kids are doing online, but they’ll open additional accounts you know nothing about. He suggested Googling your kids and then Google all and any nicknames they might use. Predators are out there, posing as friends, gathering seemingly innocuous information such as fights with parents, grades, all notable events. They use this, sometimes weeks later (“Hey, are things any better with your folks?”), to earn trust and to “groom” their potential victims. Since most of our kids’ online activity is done on phones, the bad guys are able to geotrack them.

Words of advice: Keep a dialogue going with your kids. Know what’s on their phones. If you don’t know what an app is, find out. Only allow your kids to friend people you know face-to-face. “Friends of friends are NOT friends.”

I’m serious. I did not sleep the next night.

The discussion of hate crimes was led by two intelligence analysts and was fascinating. As analysts, they don’t go out and make arrests. They collect puzzle pieces and try to fill intelligence gaps. And the public is often their best source of those pieces.

We all hear about extremists standing on the first amendment and free speech. And a lot of what we consider sick or disgusting does indeed fall under “free speech.” However, the first amendment does not protect threats. If you feel threatened, report it. The analysts use those reports as puzzle pieces. If they learn it’s just someone spouting off, they’ll determine whether to let it drop. But if further investigation leads them to discover links to radical groups online, then they can pass the information on to be delved into deeper.

“Hate crimes may not rise to the level of a federal crime, but they still have intelligence value AKA a piece to the puzzle.”

Finally, if you overhear threats, feel threatened, or believe you have one of these puzzle pieces, report it to www.fbi.gov/tips.

Oh, and I got this cool hat. 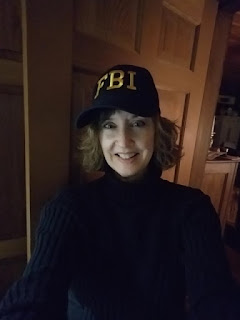 Have you ever encountered rhetoric or threats that frightened you or made you feel threatened? If so, did you do anything about it?
Posted by Annette at 12:00 AM

Sounds like you are having a great experience, Annette. And you do look pretty cool in your hat.

Haha. Thanks, Jim. And it's an amazing opportunity!

Great hat. You need the windbreaker, too.

Political rants at the gym? I ignore them and complain to the management. On the street? I scuttle by (remember, women over 40 are invisible). In the DC metro? I look at the floor or if I'm alone in the car, wait till the doors open and run to a more populated car."

While in DC, I'm frequently accosted by people with petitions. It's their right to ask me to sign, and it's my right to decline.

"Hi, you're a friendly person, right?" She holds her clipboard in front of my face.

My daughters were mortified.

Margaret, I believe their meaning of feeling threatened is more than the day-to-day stuff we deal with (not to minimize that either). Think Neo-Nazis shouting rhetoric in front of a Baptist church as an example. If the same group was simply carrying signs out on a street somewhere = free speech. If they're blocking your place of worship (or painting hate speech on your home or property), it's another matter. There are miles of gray area in between. The point they made is, report it to the FBI (or local law enforcement) and let THEM determine where in that gray area it falls and whether it warrants additional investigation or action.

Sounds like an excellent experience, Annette, I am so excited you are sharing. The one phrase that really stood out is that threats are not free speech. What a perfect way to escalate conflict while walking a fine line in a scene.

I was threatened once. Many years ago someone left a message on my answering machine that they were going to "blow my brains out." It was especially frightening since I didn't know the person or recognize the voice. I considered discounting it, but this was Miami during the days of the Cocaine Cowboys and my boyfriend's business was importing flowers - only flowers - from South America. I knew he had rebuffed attempts to have him import other products. I called the police and turned over the tape.

How scary, Kait! And definitely the right thing to do.

What a great experience, Annette.

My first husband got to attend the real FBI Academy, back when he was a cop. It set him up for a long career in all kinds of investigation, including insurance fraud (he worked for a big property and casualty insurance company for awhile) and arson. He was the director of the National Association of Fire Investigators for a few years. (We divorced in 1974, though.)

I was threatened once, via AOL, if I remember correctly, when a woman off her meds said she was going to mail a bomb to me. This was about 1994. No clue what I could have possibly said (about sewing, of all things) that tipped her over the edge, but a friend monitored our isolated mailbox for me for several weeks. The idea of one of my young daughters opening a bomb haunted me. It didn't occur to me then to report her anywhere. But both the Post Office and the FBI should have been notified, I now know.

I recently heard a very casual conversation about the risks of Chinese spying. I had no idea what was going on but it scared the daylights out of me.

Warren, I suspect we'll delve deeper into that topic in coming weeks, but yeah. All the scary stuff you hear about Chinese spying probably doesn't come close to the horrible realities.

I like your hat, too. My sisters in Crime chapter had an FBI guy come to talk to us, too. He brought along his dog, too, that he was training as a police dog. We all enjoyed his talk and petting his dog, too. What a great time you had and so much you learned, too. Thanks for sharing.