BRINGING DOWN THE TREES


BRINGING DOWN THE TREES 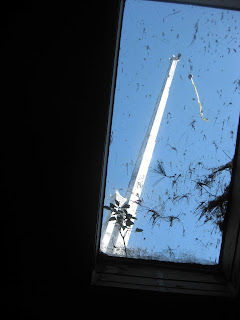 For the last few days this week, I've had two different tree services coming out to cut down some of the large spruce trees around my house, mostly those that were dead or seemed to be close to dying. Each different tree service company came with three trucks and other equipment that was incredibly 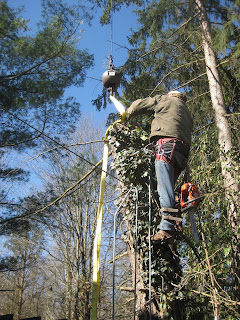 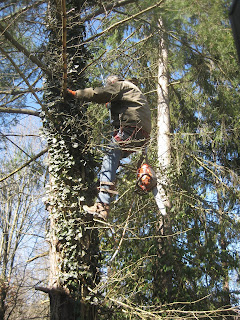 It was interesting to watch them, though. Especially watching the young men who ended up in the trees to cut the branches up high which then fell to the ground. How brave they seemed to be. Others were gathering the branches and putting them in a chopping machine on one truck and then throwing the pieces into another truck to take away.

My sister who had trees cut down last year told me that it was very dangerous for these tree guys and a lot were killed.

I loved these large trees except for one problem. Not only was my yard covered in dead pine
needles, but also hundreds and hundreds of dead pine cones which will make it difficult for me to my my yard once the grass starts growing.

Both of the tree companies (whose owners are friends) will be coming back in a few days to each
cut down one more tree but only those that look like they are dying. At the back edges of my backyard there are more spruce trees so I'm not going to be treeless by any means, and there are a few
on the south side of my house, too. Two of my sisters are coming today to help me clean up all the pine cones and then we'll go to lunch.

Have you ever had a tree service come in and cut down dead trees at your place?
Posted by Gloria Alden at 12:00 AM

I hate to see the big old trees come down, but sometimes it's necessary.

We had one oak overhanging the house. We finally called someone in to take it down. When the guy got up there, he said it was beginning to split, and half of it would probably have come down through the roof in the next storm with heavy snow and high wind.

We have an electric line right-of-way along the edge of our property. They hired someone to clear it, and they took down some magnificent trees. Not only that, but they just let the brush and trees lie. My brother got some firewood out of it, but most of it was too big & too inaccessible to harvest without logging equipment.

The pileated woodpeckers have been having a great time with it, and are doing a fairly effective (if slow) job of breaking the trunks down.

KM I worried a little that some birds might have already had their nests in the trees, but apparently they didn't because no nests were seen in the fallen and cut up trees. I'm still waiting for the second tree people to come and get the two large trunks of the last tree down. He will come I know because he left with his crew before getting a check from me. This morning my two sisters are coming to help me clean up my back yard from all the zillion pine cones all over which fell before the tree guys came. Every so often I find one in the house because it came in attached to my collie Maggie when she laid down somewhere to rest.

Pine beetles infested our pine woods in Georgia, one tree after another. The tree crew would turn up with a chipper, and the straw boss would spend thirty minutes planning how to drop a tree twice the size and weight of a telephone pole. The climber would put on leather chaps and pole spikes and climb the tree. The crew would hoist a chain saw on a rope. He'd lop off the branches and advance part-way down the tree before he looped ropes around the trunk and then made his first trunk cuts. As he made his final trunk cut, the crew would guide the top part of the tree to a clear spot in the woods, avoiding the understory dogwood trees. The climber would repeat the process lower down. Once on the ground, the remaining third of the tree secured with ropes, he'd make the final cuts and BOOM! The trunk would crash to the ground. The crew would feed the branches into the chipper and haul away segments of trunk. With a final cut to level the stump, the climber would be done.

The straw boss told me it took a year to apprentice as a climber. Trees covered with poison ivy had a surcharge, but the climber told me he never was affected. He used a secret potion on his arms, neck, and face.

the funniest thing I saw one day, driving along the highway. A worker was trimming trees close to the road. Another worker was throwing branches into the chipper... against the wind. All of the chips were blowing back into his beard! Hilarious.


Margaret, that sounds a lot like what the tree guys did here, too. Today while I went to lunch with my sisters they came over and took the two really large sections of the tree away. Before that my sisters and I were raking up pine needles and dead pine cones. The strangest thing is that I've never had so many (hundreds of them) pine cones. I have both white pines and spruce trees. I've heard that it is very dangerous for climbers and some fall to their death.

Laura, the workers I had here were throwing the branches into a chipper, too. Some of those chips blew back out which was partly what my two sisters and I were raking up.