An Interview With Gigi Pandian

When I read a description of Gigi Pandian’s Accidental Alchemist series, I have to admit that I wondered whether it would be something I’d like—a paranormal mystery series featuring an alchemist and a living gargoyle that likes to cook. I’m so glad that I gave into my curiosity and picked up a copy of The Accidental Alchemist, the first in this hugely popular series by award-winning author Gigi Pandian. Who could resist a book the author once described as, “a female version of The Highlander TV show mashed up with Scooby Doo.” Readers loved it, and the awards and acknowledgements came rolling in.

In The Accidental Alchemist, the first book in the series: Unpacking her belongings in her new hometown of Portland, Oregon, herbalist and reformed alchemist Zoe Faust can’t help but notice she’s picked up a stowaway. Dorian Robert-Houdin is a living, breathing three-and-a-half-foot gargoyle—not to mention a master of French cuisine—and he needs Zoe’s expertise to decipher a centuries-old text. Zoe, who’s trying to put her old life behind her, isn’t so sure she wants to reopen her alchemical past… until the dead man on her porch leaves her no choice. In The Alchemist's Illusion, the new book out, a perilous painting leads Zoe and Dorian on an audacious alchemical adventure in search of Zoe's old mentor Nicolas Flamel.
www.gigipandian.com.

It is a pleasure to welcome USA Today bestselling and Agatha Award-winning author Gigi Pandian to Writers Who Kill, here to talk about her modern tales of ancient intrigue.

The Accidental Alchemist series has been called a mystery with fantasy elements. How hard was it to find a publisher for a series about an amateur sleuth who happens to be 28-years-old physically but has been alive for 343 years?

When I began writing this series, I had no idea it would sell at all. I wrote a draft while I was going through chemotherapy for breast cancer. The idea of the Elixir of Life was at the forefront of my mind during my year of treatments, and came through on the page with alchemist Zoe Faust who accidentally found the Elixir of Life when she was 28 and trying to save her younger brother from dying of the plague. It was a time in my life when I realized how important it was not to waste time on unimportant things. Writing is something I've always loved, so it was meaningful to me to write this story for myself, and I didn't care how marketable it was. But when I showed my revised first few chapters to my agent, she loved the premise! She pitched the book and series to publishers on proposal, and while many publishers weren't sure where it fit in the marketplace, the wonderful Terri Bischoff (at Midnight Ink at the time) was enthusiastic about the series and took a chance on it.

There aren’t many characters with a best gargoyle friend (BGF). What was the inspiration behind Zoe Faust’s gargoyle friend Dorian Robert-Houdin, a living, breathing gargoyle? 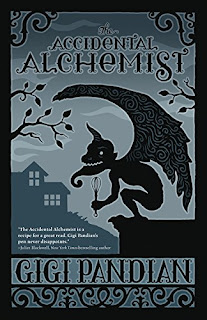 Gargoyles represent all things mysterious, and I've been intrigued by them since I was a kid. I got to tag along on a research trip to Europe with my mom when I was 10 years old, and I have photos taken on that trip on my plastic camera using 110 film cartridges. I continue to visit gargoyles when I travel.

Why did you make Dorian a chef? Were you thinking of food when he came to mind?

When I had cancer, I learned I had some food restrictions due to my particular cancer markers. I love food and didn't want to give up eating well, so the solution was to learn how to cook from scratch. I began taking cooking classes and experimenting in the kitchen. I was working on the book while learning about the wonderful world of cooking, so that made its way onto the page through Dorian.

As a fan of the Accidental Alchemist series, I was thrilled to read that the series is in the early stage of development for television. Can you tell us any more about that? 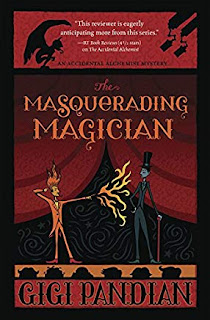 Thank you! It's exciting, and I'm learning a lot about how the process works. I'm not at liberty to say more yet, but keep your fingers crossed for me, and I hope to be able to share more soon.

When you wrote the first in the series, The Accidental Alchemist, did you have a sense that this series might be something special?

I've never been good at writing within a specific genre. I love reading mysteries across the spectrum from cozy to thriller, but I've failed when trying to write a book that falls into either category. Instead, all of my books have been great fun to write but are difficult to categorize. I think that's part of why it was harder for me to get published in the first place, but also why I've heard that the books stand out.

You are known for writing “mysteries steeped in different cultures.” Can you tell us what accounts for that?

I write what's true to me in my life. My dad is from south India and my mom is American. I grew up in California but traveled on their research trips starting from a young age (they were cultural anthropologists before retiring). So when I started writing my first novel, Artifact, it was a given that I'd have a multicultural heroine, and historian Jaya Jones is who appeared. Growing up I adored Elizabeth Peters novels, which were a mashup of mystery, adventure, and romance. I wanted Jaya to have similar adventures to Vicky Bliss and Amelia Peabody, with a cast of multicultural characters who reflected my own life experience. 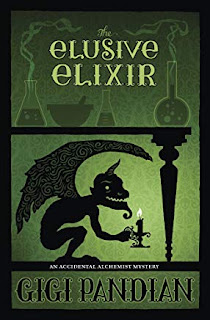 The Jaya Jones Treasure Hunt Mysteries go from San Francisco to a different foreign destination in each book (Scotland, India, France, Italy, Japan, and next up is Cambodia), and the Accidental Alchemist mysteries are based in Oregon but involve connections (and sometimes travels) to England, France, and Prague.

Your Jaya Jones Treasure Hunt Mysteries have been described as a modern-day cross between Indiana Jones and Agatha Christie. Please tell us about that series.

Jaya Jones is a historian who solves present day crimes linked to historical treasures related to India's colonial history. I love both fair play puzzle plot mysteries (epitomized by Agatha Christie) and adventure stories (think Elizabeth Peters in print and Indiana Jones on the screen), so that's what I love to write.

You are also noted for your short stories, among them your collection of stories in The Cambodian Curse & Other Stories. I understand that the story “The Cambodian Curse” held more of a curse than you intended. Please tell us about that. 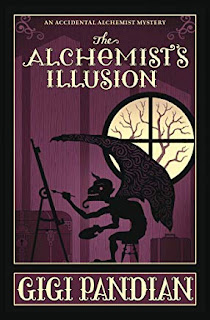 I think you're referring to the fact that I broke my ankle while I was in Cambodia! My husband and I were traveling there a little over a year ago, both for a fun vacation and for me to do research for the next Jaya Jones novel. We were exploring a temple off the beaten path, away from the Angkor Wat temple complex, and a great local guide had been showing us around for the day. Right before we headed back to the car, I slipped on a loose stone and twisted my ankle. I didn't know at the time it was broken, but while I treated it with ice at the hotel, I began writing the plot to the story that became "The Cambodian Curse."

"The Cambodian Curse" is a locked-room mystery short story about a supposedly cursed Cambodian sculpture that disappears from an impenetrable museum, and the carving's owner is killed by an invisible assailant. Jaya Jones has to partner with an old nemesis to solve the crime. It was published by Henery Press in October 2018 as the lead story in my first collection of short stories.

Artifact, the first in the Jaya Jones series, was awarded a Malice Domestic Grant and named a “Best of 2012” Debut Novel by Suspense Magazine. Did receiving accolades early in your writing career put pressure on you? 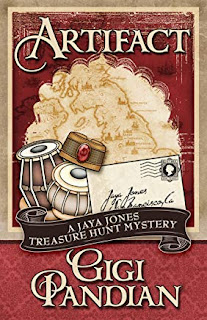 The Malice Domestic Grant, which is given out to unpublished authors writing in the traditional mystery genre, is the push I needed to take writing more seriously than a hobby. I didn't know anyone in the writing community at that point, but that's when I met the wonderful people in the mystery-writing world and learned how to turn a draft with promise into a great book.

Besides a possible TV show for Zoe Faust and Dorian, what’s next for them in print?

I'm not sure exactly what the future holds for them, except for the fact that I'm definitely going to keep writing them! They won't let me stop. Dorian in particular. He's a persuasive little guy.

Are any of your books in audiobook format?

All of my novels are available in audio, and I have terrific narrators.

What’s next for Jaya Jones? 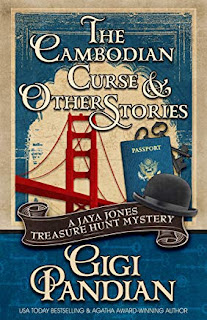 I recently turned in my manuscript for the sixth Jaya Jones Treasure Hunt Mystery. If you haven't seen me online much lately, that's why. The new adventure takes Jaya and friends to France and Cambodia, and... I don't have my book jacket copy or title approved yet, so I'll leave that location teaser there for now, and I'll be sharing more about the book this spring. It's scheduled to come out from Henery Press in November 2019.

Thanks so much for inviting me here today.

Gigi Pandian is a USA Today bestselling and Agatha Award-winning mystery author, breast cancer survivor, and accidental almost-vegan. The child of cultural anthropologists from New Mexico and the southern tip of India, she spent her childhood traveling around the world on their research trips, and now lives outside San Francisco with her husband and a gargoyle who watches over the garden. Gigi writes the Jaya Jones Treasure Hunt mysteries, Accidental Alchemist mysteries, and locked-room mystery short stories. Read more about her at www.gigipandian.com. Sign up for her email newsletter at http://gigipandian.com/newsletter/ .

Congratulations on your new release! I enjoy reading about your travels on social media and your books. Where next?

Fun chat, Gigi and Grace! And congrats as always, Gigi, on all your great success. :-)

Thanks, Gigi, for joining us today on Writers Who Kill. It's always interesting to hear what's happening with your two series and short stories. Can't wait to hear what comes of a possible TV series for Dorian. Fingers crossed.

Thanks so much for inviting me to do an interview, Grace! Waving hello at everyone :)

I enjoy your books!

I love all the Gigi Pandian books. I am a huge fan and she is also my inspiration!

Thanks for the kind words all!

And thank you Art, Gloria, and Warren!

Margaret -- Next up in a Jaya Jones Treasure Hunt Mystery, Jaya and friends travel to France and Cambodia. As for my own life, my husband and I are debating where to go next. So many amazing places in the world to see!

Grace -- Thanks again for having me :)

I was tied up yesterday and didn't get a chance to comment.

It’s been a treat to watch Gigi’s career and enjoy her books from the very start. Best of everything for the future, GiGi.