Have you ever felt like you wanted – no, needed – to do something different, something outside your comfort zone? I decided to finally take a class I’ve been thinking about for a long time: The Citizens Police Academy. I don’t have any major characters who are full-fledged police officers, but if I decide to write one, I want to get the details right. Plus, a peek behind the badge, a look at real life CSI? Sign me up!
The first class met last week in Waterford, CT. My fellow classmates included people from all walks of life. Several were retired and were curious about a profession they had once considered. I sat between a young man doing a police internship as part of his college course and a proud couple whose daughter was at the Police Academy.
One woman runs a massage parlor and is concerned about the growing human trafficking issue, which affects people’s perception of her long-running business.
Several young guys (yes, the class skewed heavily male) were considering a career change into law enforcement. There was also a guy from NPR taking the class as research for a radio piece.
The officers laughed when I said I was a writer doing research. They said they’re okay with being in a book as long as I change their names.
Done.
The class runs for ten, three-hour sessions with officers volunteering their time after a long day on duty. The program is funded by the Waterford Rotary Club, which wants people to see and appreciate what police officers face every day.
Both of our instructors had former military experience. As they outlined everything the course would cover, I felt a wave of admiration for the professionals who have to undergo constant training and retraining in so many different facets of their work. I also felt exhausted just thinking of all the topics that we'd cover in class:

Structure and operations
Recruiting, Training, Life at the Police Academy
Motor Vehicle Enforcement and Patrol (we get to go on a ride along!)
Use of Force – Taser Demonstration, Baton Use (Hands On), OC Spray – we were warned that we should dress comfortably but trust me, I do not want to be near a taser!
Driving under the Influence
Juvenile Crime
Profiling
Human Trafficking
Accident Investigation
Criminal Investigation
Traffic Complaints
Offensive Tactics
K9 Demo
Firearms/Weapons
Domestic Violence
CPR/Narcan

The officers were clear, enthusiastic, and businesslike.
They’re also hilarious. The chief walked us through a timeline of Waterford’s police history, including slides of their police vehicles over the years. A fleet of 1980s era Volvos with police lights flashed onscreen.
The department took a lot of ribbing for having the luxury car, but the Chief said that because Volvo wanted to break into the police market, the cars were (excuse the expression) “a steal” and they were sturdy, came with a bumper to bumper warranty, and had dual turbo engines.
Despite their boxy appearance, the cars were fast. The brakes, however were underpowered for such a juiced up engine. “That car was a rocket with bad brakes,” he said, wistfully. 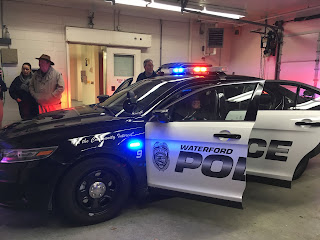 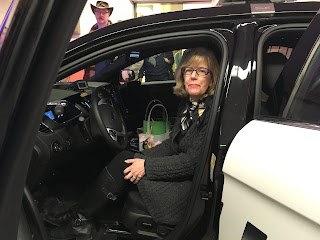 We had a tour of the police station: a stop at the armory; the sally port where we were able to get into a police interceptor;  gym; roll call room; break room (with deep brown man cave-worthy couches and recliners); detective’s room (there was an open package of Girl Scout Thin Mints on the table); and a locked library. The room was lined with empty shelves except for two, which held high school yearbooks and a copy of Black’s Law Dictionary.
When we toured the holding cells, the intercom crackled. We were told to move down a corridor because an officer was bringing someone in.
We shared glances. This was real.
I’ll keep you posted. The first thing I learned? There is no room for a purse in a police cruiser.
Have you ever done a citizens police academy?
Posted by Shari Randall at 12:00 AM

Blue Ash, Ohio CPA! Learned so much, have access to the public affairs officer for questions, drop in every September for the station open house, which includes the county-based programs and equipment (SWAT, underwater search and rescue forensics). Even a black polo embroidered with BAPD CPA.

I wrote a short story during the period I was enrolled in the program, asking the officers procedural questions, and of course, acknowledged them at the end when it was published.

Unfortunately for me, police academies seem to be scheduled so I’m in one place at the beginning of a course and have moved to my other location before the course finishes. I did attend Writers Police Academy, which was very instructive.

Margaret, it sounds like you got so much out of that academy (as well as the polo shirt - cool!) Underwater search and rescue - that's really amazing. And wonderful that you forged such a great relationship with the officers.

Hi Jim, WPA is on my bucket list. Maybe your new home town will have a CPA you can attend.

I've visited police stations twice. Once with my Cub Scouts and another time with my Sisters in Crime group. It was interesting. The 2nd time we went to the morgue, too, and saw some bodies.

Sounds like great fun. It's on my bucket list, in the meantime, I'm living large through you and Annette, keep the reports coming.

I haven't managed to find a police academy that I can attend, but I do keep my eye out in case there's one available.

It's been a while, but I did get employee training in correctional settings. And I have family members who are police officers, so I can (and do) often ask questions.

Our local Sisters in Crime had a visit, which was really fascinating,

Hi Gloria - the morgue! Yikes! That is NOT on my bucket list!

I hope you can do it one day, Kait! I'm looking forward to Annette's FBI experience, too.

KM, your experience really showed in your books about Jesse Damon. I had a brother-in-law who was a police officer, but he passed away several years ago. I still remember a lot of his stories - police officers have such gallows humor.