An Afternoon at the Opera 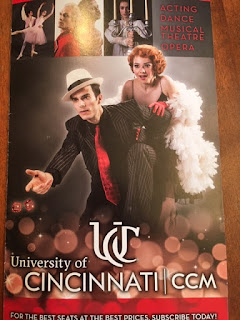 When I was a child, my mother filled our small home with music, playing records of Italian operas—Verdi, Puccini, and Donizetti, while she washed diapers and peeled potatoes. As my husband and I moved around the country, we listened to snatches of Saturday afternoon Metropolitan Opera broadcasts on our commutes to soccer and baseball practices and games. When we moved to Cincinnati, we started attending opera performances at two venues. The students at the University of Cincinnati College Conservatory of Music perform bare bones productions—last month, an ambitious performance of Strauss’s Die Fledermaus and a comedic opera, Dinner at Eight, plus two more elaborate mainstage productions each academic year. In a few weeks, we’ll enjoy Mozart’s La Clemenza Di Tito. 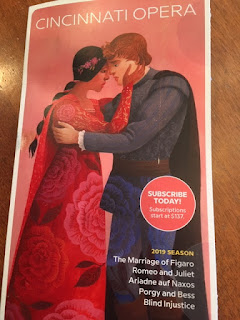 The Cincinnati Opera season is in June and July at the newly-renovated nineteenth century Music Hall. This year, we’ll attend Mozart’s The Marriage of Figaro and Gershwin’s Porgy and Bess. I know the music well; the staging will be imaginative and the singing and acting unsurpassed. 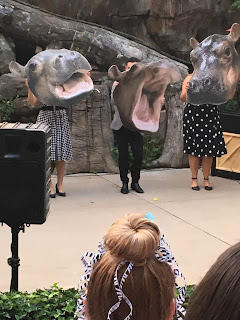 Until 1972, the Cincinnati Opera performed in an outdoor amphitheater in the middle of the Zoo. On hot, humid, summer nights the nearby elephants trumpeted, the lions roared, and peacocks roosting in the trees screeched throughout the performance. The audience enjoyed a prolonged intermission to stroll amongst the animals. The singers hated it—singing in ninety-degree heat and humidity wearing a twenty-pound costume was challenging—and the opera made a permanent move to the air-conditioned Music Hall. 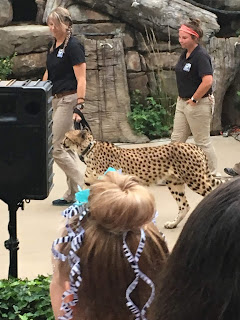 In celebration of its roots, the Cincinnati Opera hosts a yearly pre-season evening recital at the Zoo, featuring young singers and a parade of animals after each aria or duet—pigs, goats, hawks, alpacas, cheetahs and pythons, with a flamingo parade during the final quartet. 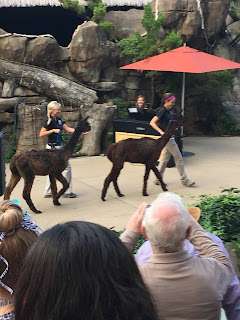 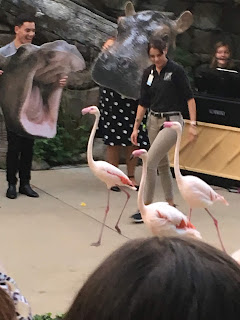 We recently experienced a new and different opera experience in a local movie theatre, a simulcast broadcast of Donizetti’s La Fille Du Regiment, live from the Metropolitan Opera. Settling back in our lounge seats with footrests, we enjoyed three hours of sheer delight.


When we attend performances at Music Hall, our seats are in the second balcony. We have a good view of the stage and can hear the singers, but our perspective is from a distance, removed from close immersion in the action. At CCM, the performance spaces are more intimate. I intently watch the singers’ body language: a pout, a sneer, a scream, as the singers portray exaggerated emotions of fear, anger, sadness, and joy.


The simulcast provided both perspectives: close-ups of the singers and a more distant full-stage perspective during the choruses. Pretty Yende, a South African soprano, clad in army uniform trousers with suspenders, sang the role of Marie, a tomboy raised by a French Army regiment. Javier Camarena, a Mexican tenor, sang the technically challenging role of her ardent lover, Tonio. The singers regularly perform together, their close emotional connection evident. Stephanie Blythe sang the role of the marquise, and Kathleen Turner performed a speaking role in her Met debut.


In the second act, Marie is forced to wear a proper dress and tight shoes as she endures singing lessons. Tonio turns up with the regiment and wins her hand. All conflicts are resolved as the entire cast fills the stage in a joyous final chorus, grouped around an army tank.


Readers, do you attend opera productions? Writers, do you draw inspiration from attending an opera?
Posted by Margaret S. Hamilton at 12:00 AM

I’m not much of an opera fan. Before subtitles, I had no clue what the words meant, so it was lots of fine sounds, but not much meaning. Jan sang in a number of opera choruses during her singing career, including for the Cincinnati Opera.

That said, we recently met through a mutual friend the head of the opera program at UW-Madison, and in addition to the classics, they perform modern opera in English. Who knows what will happen.

I've only attended a few operas, but I have three CD's with Beethoven and one of Rachmaninov and one or two with Pavarotti. So even if I don't go to many operas, I do have operatic music to listen to. In fact I named my little canary Pavarotti.

Jim, modern operas in English are fun. We saw three Bernstein one-acts last year and more recently, Dinner at Eight, based on a Kaufman and Ferber play. I know French and a smattering of German, but mostly sit back and enjoy the ride. Much of the lyrics are repetitive. Enjoy the Madison music scene.

Pavarotti! What a great name for a canary. In January, I made a pile of all our CD's and listen to one as darkness falls every afternoon.

It's wonderful to see events like this available to more people. I'm afraid I don't know that much about opera, and I'm sure I am missing a great deal.

At one point, I had a friend who was a professional violinist. He explained that operas were originally written to appeal to a wide audience, not just the elite.