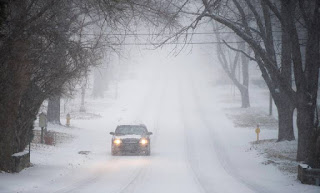 We were hit by a major winter storm this weekend, not for the first time this winter. Because of a shattered shoulder and mobility issues caused by other health problems, my doctors issued a prohibition against leaving the house if there was snow or ice or freezing rain this entire winter. Normally, this would have meant spending most of January in the house with an occasional imprisonment of the day or two a couple of times in February and maybe once in March. This winter has not been a normal winter. I have been confined to the house for almost all of January and February—and now moving into March. I have had to reschedule multiple medical appointments time and time again. It's getting old.

Now, it's just about spring or what should be spring, and here comes another round of polar weather, heavy snow, frigid winds, and ice. The National Weather Service in our area puts out an alert for a winter storm—4-7 in of snow, gusts of wind causing low visibility and blizzard conditions, temperatures dropping to single digits with wind chills below zero. My husband heads for the grocery store with a list to supply us for the next several weeks, because we realize he may have difficulty getting to the grocery store during those next several weeks. I keep checking the weather forecast every couple of hours, because it keeps changing every couple of hours, usually growing more severe as time passes. I figure it will be weeks before I see a bare sidewalk again. I hope spring comes before I forget how to walk outside in the fresh air.

I know this is happening all over the country, that people are having a more severe winter with more snow, but that doesn't make it feel any better or any easier to deal with. Since I'm under doctor's orders not to leave the house if there is snow or ice on the ground or snow or ice or freezing rain in the air, this is like a sentence of imprisonment. In an ordinary winter, this would be an inconvenience. In this winter, it has become a nightmare.

Every store in town has been sold out of ice melt, de-icer, snow shovels, and ice scrapers for many, many weeks. If you didn't stock up at the beginning of the season, you are definitely out of luck. And even if you did, you are probably out of supplies by now. In Kansas City, this weather, which has included so many ice storms this year, has caused a record number of massive potholes, which the city says it will not be able to repair until mid-summer, if then. Tire stores and car repair businesses are booming. Areas of the city have repeatedly lost power during these storms for days at a time. Limbs and branches from trees have piled up around the city, been picked up, and piled up again.

Into this bleak arctic landscape, one bit of cheer has made its way into my household. The mail delivery, which has been delayed due to major storms several times in the past couple of months, brought me news that cheered the winter doldrums. My newest book, Dark Sister, is a finalist for the Oklahoma Book Award in poetry. The award ceremony is in April. I'm delighted to be a finalist, no matter who wins the award in the end. This bit of good news has been a little breath of spring in the midst of our never-ending winter. Now, I only have to hope that I will be physically healed enough to make it to the awards ceremony and, even more importantly, that there will be no blizzards to block travel to Oklahoma for this event. In the middle of April, such would seem highly unlikely, but this has been an extraordinary and overactive winter, which shows no intentions of leaving on time.

Keep your fingers crossed for me, will you, please? 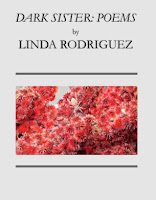 
Rodriguez is past chair of the AWP Indigenous Writer’s Caucus, past president of Border Crimes chapter of Sisters in Crime, founding board member of Latino Writers Collective and The Writers Place, and a member of International Thriller Writers, Native Writers Circle of the Americas, Wordcraft Circle of Native American Writers and Storytellers, and Kansas City Cherokee Community. Visit her at http://lindarodriguezwrites.blogspot.com
Posted by Linda Rodriguez at 12:30 AM

fingers and toes crossed! I had the jab, got the flu anyway, spent four days in bed, drowsing in the sunshine and reading through a huge stack of library books.

Coming back to life renewed and refreshed...and trying very hard to stay healthy.

More daylight every day, the daffodils pushing up under the snow, the birds ready to nest, and the spring equinox a looming reality.

Congratulations on the nomination, Linda.

I wish winter were over. Having come back from a Florida vacation, I highly recommend it. Back to the winter doldrums, thought, makes the contrast all the worse. High tight, in Norfolk daffodils are blooming and the cherry and pear trees are blooming.

Margaret, I'm so sorry you were sick. No fun, at all.

Congratulations, Linda! I sure hope you're able to get out to the ceremony!

And I am totally over winter. Bring on the daffodils.

Brava for the award and may all be well so you do not have to FaceTime your acceptance speech. <3
You are coping with serious house arrest. I spent all of one November confined with pneumonia, allowed only to go to the doctor's office. Colleagues ferried lesson plans and students' work for me, neighbors did my grocery shopping, and while I was fine with books to read (a little preview of retirement), I was still happy to be back. My students were as well, since the district had sent a business major to teach my English classes. For the rest of the year, one fake cough would have them back on task.
Hugs and healing to you. <3

Definitely keeping my fingers crossed for you and Dark Sister, Linda! Please be sure to let us know.
I'm looking out at our latest snowfall - winter has decided it's finally time to dump some significant snow and cold on CT...just as I'm looking through the gardening catalogs. At least it's spring in my mind!

Love the fake cough bit, Mary. Why do they send such wildly unsuitable substitute teachers?

Congratulations, Linda, and so well deserved! I hope you get to travel in April and come back with spring in your heart and an award in your suitcase.

Congratulations, Linda! Wishing you fair skys and warm weather for the awards, and quick healing. What a well deserved honor.

Wishing you health and good weather

Judith, Ihope to see spring in more than my heart, but from your mouth to God's ears, as they say.

Thank you so much, Kait!

Warren, I know you don't miss this since moving, do you?

Congratulations! I hope you can go to the awards.

Seems like I've been shoveling snow every other day. It's become a routine--get dressed, take my myriad meds, let the dog out, feed the cats, shovel snow.

No one could have convinced me last fall that I would have resorted to ordering on-line, and having delivered, all the things that it just seems to difficult to get to the store to buy.

Ordering online, yes, KM. A godsend in this weather.