THE TENTH BOOK IN MY SERIES


THE TENTH BOOK IN MY SERIES 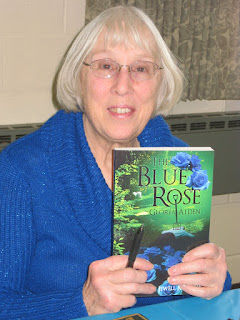 I'm working on the tenth book of my Catherine Jewell Mystery series now. It's called Daffodils in March. My first book was The Blue Rose and it took place in June, and every book since then has taken place in the next month like Daylilies for Emily's Garden in July. Ladies of the Garden Club in August, The Body in the Goldenrod in September, Murder in Corn Maze in October, Carnations for Cornelia in November, Blood Red Poinsettias in December, Amaryllis for Phyllis in January, and then in February it was Red Roses for Valentine's Day. and the March book as I mentioned above will be Daffodils in March.

Then I'll start on the April book followed by the May book which brings me back to June.In the past month I've been rereading my series and find I'm enjoying them so I think I'll continue on with the series. I've been writing down the names of different characters to include in my latest book and the ones following if they hadn't disappeared at the end of the previous books.

If you are a writer do you write a series? If you do are there some characters other than the main characters that appear in following books?

If you don't write a series, what are some of the series you enjoy reading because of the characters in them?
Posted by Gloria Alden at 12:00 AM

I've finished the first in what is a proposed series. I use the same major characters and pull in secondary characters from a large pool I've used in short stories. Or make up new ones.

Congratulations on completing your latest!

I'm very much enjoying your series, Gloria and have the third of your books on my Kindle right now to be read. I do tend to like to read series novels, getting to know the core group and picking out who from the newcomers is making their first and last appearance on the page. It's a fun game of clue!

I have my Jesse Damon Crime Novel series, and I hope to have the 6th one out soon.

Margaret, Thank you. I wish you luck in completing your series.

Kathleen, I can't wait to read your latest Jesse Damon novel soon. As I mentioned to you before, I really like this series.