This coming weekend, more than 600 will gather to celebrate the 25th anniversary of Malice Domestic, a mystery readers and writers conference held each spring near Washington, D. C. The participants in Malice Domestic favor what is known as the “traditional” mystery, like those written by Agatha Christie, where the murder usually occurs off stage and the focus is on the investigation or detection.

Some people associate Malice Domestic with the cozy mystery, taking place in a small town, resolved by an amateur sleuth, and often featuring a cat; however, the authors attending Malice represent a wide variety of mystery genres, including police procedurals, private investigators, thrillers, women in jeopardy, paranormal, and historical. Because Malice usually follows the Mystery Writers of America’s annual celebration, Malice attendees get to hear all about the Edgar news first hand.

Malice awards are given to recognize best novel, best first novel, best short story, best young adult novel, and best nonfiction. They are called the Agathas, in honor of Christie, and the award itself is a porcelain tea pot.

Last year, two new awards were initiated, one to acknowledge the best historical novel (first awarded to Rhys Bowen, who was not at the banquet to accept because of injuries she suffered from a fall at the conference) and the other in recognition of Elizabeth Peters’ heroine, the Amelia, which honors lifetime achievement. Last year’s Amelia recipient was Elizabeth Peters. This year, Carolyn Hart will be recognized.

The great wonder of Malice is its family atmosphere. People greet each other annually and pick up conversations from the year before. Audience members bring knitting to occupy their hands while they listen to the speakers. You don’t ever have to worry about being alone because someone is always there to invite you to have a drink or go to lunch or dinner and talk books and authors.

Vendors have the participating authors’ latest as well as some of their inventory. There are also tables offering used books, clothing, and jewelry. You don’t need to leave the hotel to go on a shopping extravaganza.

I discovered and attended my first Malice in 2003, when Mary Higgins Clark and Carol Higgins Clark were guests. I was very excited to be among the many authors whom I had come to admire. I had my picture taken with the Clarks and made copies for myself and my aunts, who were great fans. Later, my aunts told me another aunt had visited and asked them who was in that picture. It made me feel like a real author to think I had blended in so well with the writers that I went unrecognized by family.

When my mother was able to attend Malice with me, I would drive from South Carolina, traveling through North Carolina.  Once I had the opportunity to tell Margaret Maron the trip to Malice made me feel like I was driving through Deborah Knott’s territory. She told me to let her know if I was coming and to stop and visit.

Cathy Pickens had been one of my students in law school, and I reconnected with her at my first Malice. I met Joanna Campbell Slan at a panel; rode on the elevator with Louise Penny after she won her third Agatha; and had a great conversation with Sandra Brannan at a reception which led to our continuing friendship. My good friend Dorothy St. James was introduced at the New Authors’ Breakfast last year.

The delightful Cindy Silberblatt, who makes the new author introductions, has helped me to find so many emerging writers to enjoy. It’s a thrill to see that she is being recognized as Fan Guest of Honor this year.

When Sue Grafton attended several years ago, I had the good fortune to sit beside her in the audience and the audacity to tell her I had worn my all purpose black dress in Kinsey Millhone’s honor. I have a feeling she hears that line a lot. She told me she had seen my dress material before.

I met Dana Cameron standing in line to get a book signed by Elizabeth Peters. I took Dana’s picture with Ms. Peters. The next year, Dana had my picture taken with her and posted it on her website. Last year, I was very honored to join Dana at her banquet table, to cheer as she served as Toastmaster, and to watch her win best short story for “Disarming.” I got to meet Charlaine Harris, Dean James, Janet Hutchings, and Frankie Bailey, and see Toni Kelner, who I had met previously.

The next morning, at the Sisters in Crime Breakfast, I saw Ms. Harris had an empty seat beside her. She put her hand up as I approached, and I thought that meant someone else was seated there. I passed by and suddenly heard Ms. Harris call out my name and ask me to come back and sit down. She had been motioning for me to join her, not to move on. She remembered my name! That’s the kind of special moment you can experience at Malice.

I have to sing the praises of those who plan the conference and execute it so flawlessly. They prepare a complex and well organized program, coordinate hotel services, mobilize volunteers, and, at the end of an exhausting weekend, are somehow ready to start again.

Thanks to so many who have made my memories of Malice Domestic so very special. Have you been to Malice and are you going this year? What memories do you have of Malices past? 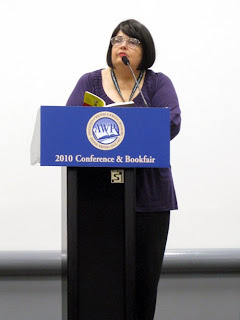 (My apologies for the lateness of this post. I ended up in the ER last night and came home sedated and missed posting this as I normally would have.)

I had a dream for many decades, a dream that I would write novels that would be published by a major publisher to great reviews and win many honors. And for many years I had to put that dream on hold for lack of time as I worked a demanding and fulfilling job while raising a family. I still wrote whenever I could and still had my dream.

Poetry was shorter so I started writing poetry in those bits and pieces of time I could steal, and eventually some was published and then more. Finally, I had two books of poetry published to good reviews and even some awards. I was happy, but… I wanted to write novels, too.

Ultimately, I had to leave my job for health reasons. After a period of getting my health stabilized, I had time to write, and I wrote a novel. This novel won a major competition and was published by a major Big Six publisher. It got tons of great reviews and is now winning some national honors. I was happy with my editor and publicist and loved my book covers.

My publishers were happy with the sales—for a first book. It didn’t put me in line for the New York Times bestseller list any time in the near future. And my publishers even wanted more books, but they didn’t want to pay much in the way of an advance for them. The whole industry had gone this way of drastically smaller advances, it seemed. I began to fret about sales, following the BookScan numbers and Amazon rankings all the time. Even as everything in my dream came true, I became depressed and stressed about my sales and my future.

A good friend, a literary fiction writer who teaches in an MFA program, came to town on book tour, and my husband and I took him to dinner. As usual, we spent the night talking writing and the state of publishing. This is what writers tend to do, I’m afraid. He asked me about my book, and I told him about the Barnes & Noble Pick of the Month and the national book club selection and the reviews. But, I added, not wanting him to think I was more successful than I was, it wasn’t translating into real money. My friend looked at me and gently said, “Linda, what you’ve got is what every MFA student in America wants and most of the faculty, too.”

And he was right, of course. I had been phenomenally lucky. Instead of celebrating and enjoying all that wonderful good fortune, a dream come true, I had allowed myself to fall into the trap of moving the goal line until it was once more out of reach. I wasted all the goodness of part of that year with that silliness.

But I am determined to do no more of that. I’m living the dream I always wanted—my book in stores with great reviews, up for awards, and another coming out to good reviews and other great bonuses. I no longer care what the BookScan numbers are. I’m enjoying this dream come true right here and now.

I’ve decided that my focus needs to be on writing the best books I can and doing all I can to see they connect with readers. The rest is out of my control, so I can’t waste my energy worrying about it. I’m just going to be happy living the dream.