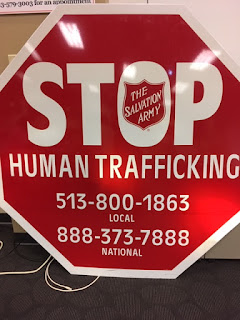 As a graduate of the Blue Ash, Ohio, Citizen’s Police Academy, I receive notification of conferences open to the public. On January 25th, I joined 150 social workers, counselors, medical and law enforcement personnel for an all-day session, supported by the Salvation Army and American Red Cross.

The Cincinnati Salvation Army provides a twenty-four-hour hotline for trafficking victims, crisis intervention, case management, and outreach. They provide transportation, shelter, and court advocacy. Their hotline received over 3400 calls in 2018, and they served 207 new and existing clients through case management.


I attended workshops focused on victim treatment. Kris Napier is a Sexual Assault Nurse Examiner (SANE) at a Toledo teaching hospital. Napier spends three to four hours with each new sexual assault patient in the ER. She stressed that only the victim can consent to giving evidence—not the police (without a court order) and not a physician. In addition to Napier, an advocate from the local YMCA stays with the patient. Napier also cares for victims of domestic violence, who typically avoid treatment until they fear for their lives.

Napier has trained her staff to avoid being judgmental and makes the safety of her victim-patient a priority. No family members or boyfriends are permitted in the treatment area. When needed, Napier uses a trusted translator instead of a relative. After gaining the patient’s trust, her job is to provide medical care. If her patient asks for help, Napier and the advocates make arrangements to transport patients to safety at a local shelter.


Blue Ash Police Officer Beth Roach gave an overview of both domestic sex trafficking and labor trafficking. Law enforcement must have evidence of the act, means, and purpose of trafficking: recruitment by force, fraud, or coercion, transport, and providing labor or sexual services. Officer Roach discussed various recruitment techniques by Romeo pimps, who wine and dine their victims before coercing them into their organizations. These pimps provide housing, food, and drugs for their girls. Roach noted that pimps have an incredible ability to identify and coerce young women.


International trafficking victims usually don’t speak English. Their pimps assure them local law enforcement officers are part of ICE and will deport them.


Internet solicitation is a huge problem. Currently, prostitutes use Grindr, Tinder, and Facebook to solicit customers, sometimes using a bouquet of roses code to designate different sexual acts (seventy or one hundred roses). Law enforcement officers searching for child sex trafficking victims use Spotlight, a website free to police departments that enables an officer to search for a specific child in a specific region if the child is advertised on the internet.

Human trafficking cases are difficult to prosecute. Often, a prosecutor will pursue drug and gun charges instead. Victims and witnesses are usually relocated by their organizations to different cities before the case comes to trial.


Blue Ash officers routinely investigate prostitution in local massage parlors. They can appeal to the landlord with a nuisance complaint, or ask the Fire Department inspectors to report irregularities. Another trend is using a hotel as a “one stop shop” with rooms, girls, and drugs.


Rachel Johnson is a doctoral student who works with trafficked victims. Her patients, some of whom were forced to work when they were thirteen, have nightmares, flashbacks, and low self-worth. They often have developmental and learning disabilities, and many are substance abusers, because street drugs help them cope with trauma. Victims consider themselves life’s losers, but they also exhibit strong maternal instincts to the younger girls in their organization. Many were rejected and abused as children.


Attorney Elizabeth Well, representing the Ohio Crime Victim Justice Center, spoke about victims’ rights post-Marsy’s law, a law which gives victims safety, dignity, and privacy. Attorney Well told the story of a young woman who was the victim of childhood incest. When her prospective employers googled her name, the first article was about the trial. Well and her non-profit lobbied to ensure the victim’s privacy on social media.


The day-long session ended with a panel discussion by trafficking victims, including Harold D’Souza, who lives in Blue Ash and whose children attended my daughter’s high school. Harold came to Blue Ash with an H-1B visa to work as a business development manager for an annual salary of $75,000. Instead, Harold and his wife Dancy and their two sons lived in an unfurnished apartment while Harold and Dancy worked unpaid fifteen-hour days, 7 days a week, at a local Indian restaurant. After nineteen months, Dancy protested. A lawyer came to the restaurant and threatened them with arrest and deportation. The family sought help from the Blue Ash Police Department, which referred them to the Department of Labor (and for Dancy, the State of Ohio equivalent). Local organizations donated money for housing and food. Cincinnati Works helped Harold find a position with Cincinnati Children’s Hospital, where he works as a senior supply chain associate. President Obama appointed Harold to a two-year term on the U.S. Advisory Council on Human Trafficking. Harold and Dancy now lead a non-profit organization, Eyes Open International, addressing labor trafficking.


Readers and writers, are you aware of labor or sex trafficking in your community?

Eye opening, Margaret. I currently live in rural SW Florida and although we have a large migrant farm population, I have not heard much about either sex or labor local trafficking. The story is far different on the more populated left and right coasts of the state however where reports of both sex and labor trafficking are frequently featured news stories.

I am confused about the statements from Kris Napier, and it may be a case of not enough coffee on my part. Unless the victim consents, do the cases go unreported to law enforcement? Or are the reported but witness and/or victim names redacted?

Unreported. However, with the patient's permission, the ER team can collect evidence without the patient's name attached to it. This is helpful in serial rapist cases.

Good point, and I'll check with my local police department contact for a definite answer.

Our ladies' church groups supports a safe house for the male victims of human trafficking for sex labor because most of the victims are female--but not all. The safe house is in NC, and after many setbacks is finally up and running. I saw an ad about human trafficking in a magazine. It showed the back of a female with a bar code on her shoulder. It was a shocking concept--this is the 21st century?

Elaine, that's very interesting...and necessary. College parties are a traffickers' hunting ground. This is our world.

Today, I read the obituary of a young man who was a neighbor of ours. In the obituary it mentioned his younger sister who he loved who was gone. My daughters reminded me that she was kidnapped or disappeared in some way when she was visiting one of the islands south of Florida. They tried to find her for years and years and were never able to find her. It was so sad for the family to not know where she was or even if she was still alive.

I have read about migrants being kidnapped, and also there are women and girls who aren't migrants who are abused by husbands and boyfriends. We have groups in our town who take them in and keep them from going back to the abusive boyfriend or husband in safe houses. And then, of course, there are the young girls, young boys (like the young boys Michael Jackson abused who suffered from the fear of telling anyone.)

Gloria, how wonderful that your community has a battered women's shelter. The BWS in my area are administered by the YMCA and the Salvation Army handles trafficking victims.

Thanks for highlighting this disturbing problem. So many of the victims have no idea how to get help, and are convinced that they will be arrested themselves if they seek any assistance.

Kathleen, I learned from the first-hand story I heard at the conference about the victims' fear of leaving the situation. Fortunately, the Blue Ash PD is very involved in community outreach and the victims knew they could ask for help without fear of arrest.

So sad that this is going on and the terrible toll it takes on the victims and society.

I've noticed more and more news stories about young people "disappearing" and I'm starting to wonder if this is part of what is happening. I'm glad there are people who are working to help these young people. Thanks, for sharing Margaret.

Grace, yes, I was stunned to learn about the trafficked family whose sons attended high school with my daughter. Someone asked me yesterday if I considered a local massage parlor suspicious. I hope the police monitor all of them.

Shari, Amber Alerts on the highways and text alerts on cellphones, extensive social media coverage, and police use of Spotlight all help recover young people. I just watched a documentary about trafficking teens from Guatemala to a rural Ohio egg farm. The living conditions were hideous and their families were threatened. Finally, one brave teen got his hands on a phone and called a relative in the US, who alerted the police and FBI.