Five Star Publishing published Van Kirk’s Endurance Mysteries: Three May Keep a Secret and Marry in Haste. After having her rights reverted, she republished those books and added The Locket: From the Casebook of TJ Sweeney and Death Takes No Bribes. Encircle Publications published her latest book, A Death at Tippitt Pond [June 2019].

Encircle Publications published her latest book, A Death at Tippitt Pond [June 2019]. Her website is www.susanvankirk.com , she is active on Twitter, Instagram, Facebook, and Pinterest, and she is a member of Mystery Writers of America and Sisters in Crime. She lives at the center of the universe—the Midwest—and writes during the ridiculously cold and icy winters. Why leave the house and break something? Van Kirk taught in high school and college and raised three children. Miraculously, she has low blood pressure. 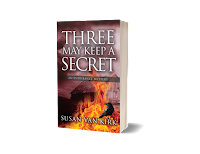 Grace Kimball, recently retired high school teacher in the small town of Endurance, Illinois, finds herself in danger when she investigates the arson death of a past colleague with lots of enemies. Joining her former student, Detective TJ Sweeney, Grace steps into the victim’s job and discovers the hard way that people in town have secrets they will kill to hide. Grace also finds herself attracted to the town’s new newspaper editor, but when suspicious deaths occur, she wonders if she can trust this mystery man. 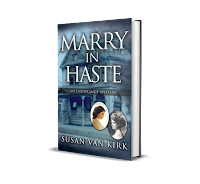 In 2012, wealthy Endurance banker, Conrad Folger, is murdered and his wife arrested. Grace Kimball, retired teacher, joins Detective TJ Sweeney to investigate the murder and they uncover a dark secret. In 1893, Olivia Havelock, age seventeen, moves to Endurance to seek a husband. She finds one in Charles Lockwood, powerful and wealthy judge, but her diary reveals a terrifying story.


Two wives—two murders a century apart—and a shocking secret connects them.  To Marry in Haste was a bad idea. 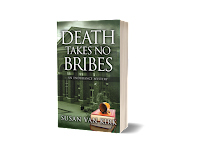 Who poisoned Endurance High School Principal John Hardy?
Retired teacher-turned-sleuth Grace Kimball returns to her old school with Detective TJ Sweeney. Could one of her colleagues be a killed? Add a little “Arsenic and Old Lace,” a soon-to-be wealthy widow, a spurned lover, a chemistry teacher with poisons, and a betrayed husband. You may have to keep a scorecard. Death Takes No Bribes 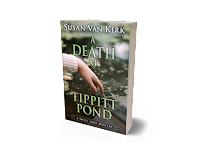 A small town called Sweet Iron, Illinois, is the setting for the first
book of a series about Beth Russell, historical researcher and genealogist. A Death at Tippitt Pond begins a new series involving a ghostly presence, a stranger in the shadows watching Tippitt House, and mortal danger. When Beth discovers a huge secret in her family tree, she decides to uncover the truth about the background of her family. Once her intentions are known in the little town, people who have a great deal to lose by her discoveries begin to push back, hoping to keep her from revealing what happened that day at Tippitt Pond. Will she learn the answers to questions? More importantly, will she learn them before a killer decides she’s too smart?

Where to begin a novel is a common problem that a lot of us have. I certainly have experienced lots of rewirting of the beginnings of novels. I'm struggling with my latest. Good to know I have company.

Where to begin a novel is a common problem that a lot of us have. I certainly have experienced lots of rewirting of the beginnings of novels. I'm struggling with my latest. Good to know I have company.