When Inspiration Does A Bunk by DM O’Byrne 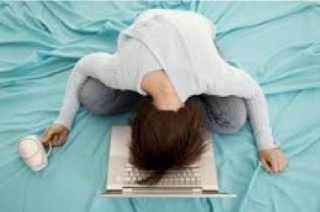 Once I had finished my novel, Death in Trout Fork, I almost immediately started on the sequel, The Mountaintop Murders. I had been thinking about new plot lines and characters even before I finished the first book.
Once I had the sequel plotted out and started to write, I was really cooking, writing nearly a chapter a day toward the end. I fired it off to the publisher, hinting at a third book in the series, The Ryn Lowell Colorado Mysteries. Then the rot set in.
I had zero inspiration about the third book. I sat down at my computer and tried to write out some possible plot lines involving the heroine and the other characters I had spent two years with. But nothing came to me. Nada. Zip. Zilch.
I stared at the screen and racked my brain for ideas and the only thing I came up with is that I was sick of Ryn, my heroine, and really didn’t care what happened to her. That was like saying I didn’t care about my child. Unthinkable. But there it was.
Every writer, so I’ve heard, goes through similar dry times. So what is a novelist to do? More importantly at the time, what was I to do? I did what we all do when we want information —I Googled “writer’s block” and came up with a ton of suggestions, some helpful, some downright weird. Do any of them work? I don’t know. They didn’t for me.
So I reverted back to a philosophy I adopted many years ago that applies to any difficult situation—do something, even if it’s wrong. At least you have something you can fix. That has been a helpful mantra for me in many of life’s trials. Too many people are immobilized by fear of failure or of making a mistake. They are plagued by “what ifs” and imagine all sorts of possible dire consequences to any action they might contemplate.
The problem with that plan is that it produces inertia. Of course they’re right in believing if you do nothing, you can’t make a mistake. But doing nothing also produces nothing and for a writer, that is career-ending. If you do something and it turns out badly, you can always fix it or re-do it. But if you do nothing, you have nothing to work with.
So I started writing. What I wrote wasn’t good, and it will probably not make it into the third book, but at least I had a starting point. The more I wrote about my characters, the more I got into their heads and the more ideas got into mine.
The point is that I can fix, improve, or delete most of what I wrote. But if I had written nothing, I’d have nothing to work with. So, my advice for writer’s block? Write something, even if it’s wrong, even if you delete most of it eventually. At least you’re writing. The rest will take care of itself.
I’m happy to say that The Mountaintop Murders is finished and scheduled for release in May, 2019. The third book in the Ryn Lowell Colorado Mysteries, A Killing in Vail, is nearly finished. I’m excited about it and, so far, writer’s block has not been a problem. 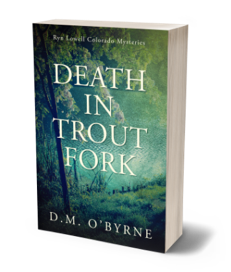 Death in Trout Fork is available from Amazon, Barnes and Noble and Black Opal Books.
Posted by E. B. Davis at 12:00 AM

congratulations on your new release! I look forward to reading it. I'm always juggling several projects at the same time, so if I stall out on one, I switch to another.

Who was it who said you can't edit the unwritten page? Sounds similar to your theory, and one I plan to put into practice if you don't mind me hijacking it! Best with the series. I'm looking forward to settling in with it.

Enormously prolific Nora Roberts said, "You can't edit a blank page." I suspect she was not the first person to express such a thought.