According to my dad, wishes were for the weak. You had to make your own destiny.

Right now, my destiny was here, working in the bar…

With Chicago winters in the rearview mirror, Chloe Jackson is making good on a promise: help her late friend’s grandmother run the Sea Glass Saloon in the Florida Panhandle. To Chloe’s surprise, feisty Vivi Slidell isn’t the frail retiree Chloe expects. Nor is Emerald Cove. It’s less a sleepy fishing village than a panhandle hotspot overrun with land developers and tourists. But it’s a Sea Glass regular who’s mysteriously crossed the cranky Vivi. When their bitter argument comes to a head and he’s found dead behind the bar, guess who’s the number one suspect?

In trying to clear Vivi’s name, Chloe discovers the old woman isn’t the only one in Emerald Cove with secrets. Under the laidback attitude, sparkling white beaches, and small town ways something terrible is brewing. And the sure way a killer can keep those secrets bottled up is to finish off one murder with a double shot: aimed at Chloe and Vivi. 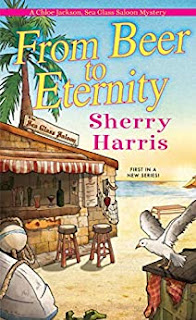 In late December, Sherry Harris’s ninth Sarah Winston Garage Sale mystery, Absence of Alice, will be released. Meantime—Sherry has written the first book of a new series, From Beer to Eternity, set at the opposite end of the East coast—beachside on the Emerald Coast of Florida’s panhandle region. Her main character is as different from Sarah Winston as the setting. Chloe Jackson is young, single, and by profession, a children’s librarian. But like Sarah, Chloe is brave, dedicated to the truth, loyal to her friends, inquisitive, and persistent. You’ll like Chloe, even if you want to pour beer over bar owner Vivi’s head now and then.

Is there a country/cowboy flavor to the Emerald Coast, being so close to Alabama and Georgia? How do you know the area? Is Emerald Cove a real town? The Emerald Coast is very southern. It’s often called Lower Alabama and the Redneck Riviera—although they are trying to shed the latter. My parents retired to the area after visiting since the mid 1980s. I’ve visited many, many times, and then we were fortunate enough to be stationed there for two and a half years when my husband was still in the Air Force.

Why did Chloe take a leave of absence from her librarian’s job in Chicago to waitress in a bar named the Sea Glass Saloon on the Florida beach? Before Chloe’s best friend, Boone, went on a deployment to Afghanistan, she promised him that if anything happened to him, she’d go help his grandmother (a woman she’d never met) run her bar in in Emerald Cove. One of Chloe’s life mottos is: a promise made is a promise kept. When the worst happened, Chloe felt honor bound to go to Florida.

What would possess anyone to wear an armadillo hat? Armadillos carry the bacteria responsible for leprosy, as well as other deadly bacteria. Should Vivi, the bar owner, even allow her patron to enter the bar where patrons drink and eat? This made me laugh! I’m envisioning a shell that has been well-cleaned and sanitized. After I came up with the idea, I Googled armadillo shell hats and some interesting images came up.

How does Chloe invoke her librarian persona in the bar? As a children’s librarian in an urban Chicago library, Chloe is used to dealing with a wide variety of people. She thinks drunks and toddlers have a lot in common. Chloe uses the skills she learned as a librarian to deal with the customers at the Sea Glass Saloon. 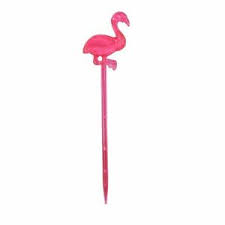 I was surprised at Vivi’s attitude toward Chloe. She was a friend of Boone’s, her grandson. Why does Vivi seem to dislike Chloe? Vivi is grieving the loss of her only remaining heir. I’m not so sure that Vivi dislikes Chloe as much as she doesn’t like the situation, and Chloe is a reminder of that. Vivi’s a very independent woman and doesn’t take to the idea that she needs help.

Joaquin, the Sea Glass bartender, is gay, but the ladies don’t seem to know that. What is Joaquin’s background? Joaquin is a happily married man, but also a flirt who loves everyone. One of the things that I found out about Joaquin as I was writing is that he was once a professional backup dancer for people like Ricky Martin and Jennifer Lopez. Now he’s settled down and is a fisherman in the morning and a bartender in the afternoon.

What’s a rocks glass? It’s a short tumbler with a thicker than normal bottom.

What’s a channel knife? A channel knife is used to cut strips of citrus fruit rind for garnishes in drinks. I have learned a lot about bartending as I researched for this book. I have a new appreciation of bartenders!

What are the heritage businesses and why are they called that? They are businesses in Emerald Cove that have been there since at least the 1940s.

After Chloe finds the body of a local Sea Glass patron dead by the dumpster behind the bar, Vivi is taken in for questioning by the police. What compels Chloe to investigate? Chloe is doing what she thought her friend Boone would want her to do—which is to help his grandmother out.

Due to tourists and expensive short-term rentals, Chloe ends up sleeping in her car or on Boone’s boat. Why does Vivi suddenly give Joaquin the keys to Boone’s house to give to Chloe? Vivi was appalled when she found out what Chloe was doing. When they are together, they do rub each other the wrong way, but Vivi also wants Chloe to be safe for Boone’s sake.

You give a history of the word “cocktail.” Please explain the history to our readers, who may never want a mixed drink again. The word cocktail dates back to 1776 and supposedly came about when a woman in New York ran out of wooden stirrers and grabbed the feather of a cock’s tail to use instead.

Who is Ann Williams? I made the same mistake Chloe did. Is Ann the reason Chloe stays away from Rhett? Ann is one of the reasons. But Chloe was engaged to someone not too long ago and is leery of jumping into another relationship. Plus, she has unresolved issues relating to Boone. 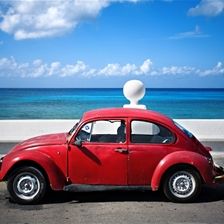 Each of the heritage business owners has a motive to kill. Of all of them, I liked Ralph Harrison, owner of the Redneck Rollercoaster, but he provides more questions than answers. What is the ride, and what were the racial politics of the day? The Redneck Rollercoaster is actually a trolley that takes tourists around Emerald Cove. But originally it started when black people in the panhandle of Florida weren’t allowed to go to amusement parks in the area. Instead they took dune buggies out on the giant dunes and made their own rollercoasters. At some point they realized how much damage that caused and the business evolved.

How did the Appalachian Mountain quartz end up on the Panhandle beach? I was so fascinated to learn that the white sand on the Emerald Coast was actually fine bits of white quartz washed down the Apalachicola River to the Gulf Coast. The tides then wash it up and create the beaches. It’s an ongoing process.

Why does Chloe lie to children and think it’s a good thing? This is what Chloe thinks about lying: “I was an adept liar. It came from working around kids all the time. My friends gasped in horror when I said that, but I always pointed out that kids get lied to all the time—Santa Claus, Easter Bunny, Tooth Fairy, Elf on the Shelf.  I’m proud to say I wasn’t above doing it at the library when absolutely necessary to prevent a catastrophe.”

What is Crab Island? Doesn’t it ever flood? What do people do on the island? Crab Island is actually a sandbar in Choctawhatchee Bay. It’s a huge attraction for boaters and is a mob scene in the summer. Here’s an interesting article with some beautiful pictures of Crab Island: https://www.destinvacationboatrentals.com/blog-post/crab-island-the-complete-visitors-guide-to-destins-most-popular-hangout/

What are Florida Man stories? They are stories about crazy events or strange crimes that occur in Florida. There are websites, Facebook pages, and even Esquire magazine articles devoted space to the Florida Man. For example, a man in Jacksonville, Florida took a five-foot alligator into a convenience store with him when he was on a beer run. That’s a Florida Man story.

What is muddling? It’s simply mashing ingredients to release their flavor. A good example is mashing mint leaves for a Mint Julep or a mojito.

Ann William’s real last name is Lafitte. Wasn’t Lafitte a pirate? Jean Lafitte was a pirate, but he was also a war hero during the War of 1812.

Although Boone is dead, his character is very much evident throughout the book. Will we learn more about Boone in future books? It’s almost like he could see the future. Will he guide Chloe deeper into his world? I confess I had no idea that Boone would loom so large in From Beer to Eternity when I started writing the book. He’s not a ghost, but he is a presence. Boone will be in future books because he is the reason that Chloe is in Emerald Cove.

What’s next for Chloe? I just turned in A Time to Swill which comes out next August. When a ghost ship (which is a term for an unmanned ship) washes up on the beach in Emerald Cove, Chloe’s life and the lives of the heritage business owners takes a turn that no one saw coming. Thanks WWK for having me back to talk about my new series!