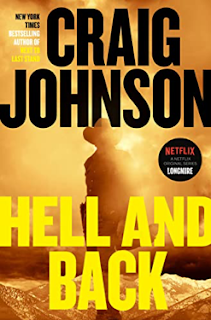 To Hell and Back is the eighteenth book in the popular and long-running Longmire series by Craig Johnson. I first encountered the series at the recommendation of our own Annette Dashofy when I posted a request for a Wyoming set book for a Goodreads challenge. It was love at first read, and I immediately devoured the series. This latest offering makes me glad I did.

The book is receiving mixed reviews. While Johnson has always featured spiritual and metaphysical aspects of native cultures in his books, this story rests solidly in the realm of the supernatural. Walt Longmire awakes to find himself frozen to a street in an unknown location. The only clue to his identity is the name in his hatband. He discovers he’s in Fort Pratt, Montana—a place where time stands still. Literally. It’s always 8:17 and everyone he meets is vaguely familiar. Stuffed in a pocket is a missing persons poster, a chapbook in a foreign language, and a vintage postcard of the Fort Pratt Industrial Indian Boarding School, a school that burned down at the turn of the twentieth century and tragically took all thirty-one of the students' lives.

At first glance, the book appears to be a sequel to Daughter of the Morning Star. While it resolves the open questions of that book, it also invokes the now reanimated ghosts of desperados Walt dispatched in prior books and brings back one of my favorite characters, Virgil White Buffalo. Regular readers will know that Virgil’s presence serves as a bridge for Walt to Cheyenne mysticism and mythology. This time, though, Virgil needs Walt as much as Walt needs Virgil. In order to serve Virgil’s needs, Walt time travels to the doomed boarding school at the turn of the century where events occur that explain both the chapbook and the postcard. To accomplish Virgil’s goal, Walt and Virgil do battle with the Éveohtsé-heómėse, defined in the Amazon blurb as the Wandering Without, the Taker of Souls.

The book is well written, the language flows beautifully, and Walt’s search to find himself and his purpose in life rings true. I confess I would have preferred this book to feature Henry Standing Bear rather than Walt Longmire. The story is essentially one of Northern Cheyenne tradition, and Henry would have been a more satisfying hero. There is a plot hole that if analyzed renders Virgil and Walt’s quest as moot, but somehow that isn’t an impediment to enjoying the story.

The reappearance of so many of the characters from prior books made me wonder if this is meant to be the last of the Longmire series. To the best of my knowledge, Johnson has been silent on that point, but the book does serve as a wonderful wrap up of open plotlines and questions. That said, the next Longmire will be pre-ordered as soon as it becomes available. I’m eager to see where Johnson takes his hero.

Pleased to hear of an addition for Longwire fans!

yes, and it's an interesting book!