An Interview with Author Korina Moss by E. B. Davis

“…I have to be honest about how I feel.” He stepped closer to me,

his dark eyes never leaving mine.

I felt my heart pick up speed. I caught a hint of his rich cologne. I inhaled, trying to

breathe in more of the intoxicating undertones of citrus and wood. “Go on.”

It came out in barely more than a whisper.

He hesitated a moment more, then finally spoke. “Don’t do anything stupid.”

Things are going from gouda to bad to ugly for cheesemonger Willa Bauer in Gone for Gouda.

Yarrow Glen’s newest cheese shop, Curds & Whey, has a lot on its plate, but cheesemonger Willa Bauer relishes a challenge. There’s a float to build for the fall festival, plus the French-inspired cheese shop is playing host to celebrity vegan chef Phoebe Winston. But when photos surface that prove this vegan influencer is, in fact, a carnivore, things crumble faster than any cheese on the market: Phoebe is murdered. Willa’s employee, the affable Archie, was the last one to see Phoebe alive and the first person the police suspect. To clear his name Willa must uncover who’s been up to no gouda... 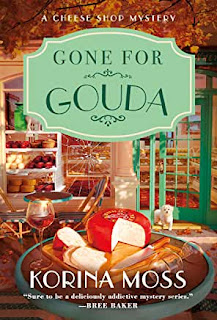 When WWK blogger Korina Moss announced to our group that her contract had been extended for three more books, for a total of six (for now), in her Cheese Shop Mystery series, we applauded. It’s a great cozy series featuring Willa Bauer, cheesemonger and amateur sleuth. Gone For Gouda is the second book in the series, which was released yesterday by St. Martin’s.

Willa Bauer is aided and abetted in her investigations by her two shop employees, other business owners, and a friend, pitting her against the town’s police detective, who also is a widower. In Gone For Gouda, Willa appears to have not just one, but two possible romantic interests, both of which have her tongue-tied but pleased. Willa destresses by making cheese recipes and eating them. I’m a bit worried about her weight and health, but then that’s Korina’s problem.

Although the cheese shop is French inspired, the book is set during October in time for the town’s fall festival, more reminiscent of an Oktoberfest. What is the history of German Obatzda? Is it the German word for beer cheese?

It’s a classic German type of beer cheese. The dish was created during a time when cheese was quite expensive in the region, so families would look for ways to make every bit of their leftover cheese edible, thus it’s made with different types of cheeses, onions, and spices. It peaked in popularity in the 1920s when it was served for the first time by an innkeeper in Bavaria.

I was surprised that Willa carried vegan cheese in her shop. It seems like an oxymoron. What is vegan cheese made of, and doesn’t it go against Willa’s nature to sell nondairy “cheese”? She grew up on a dairy farm.

Cheese is made from animal milk and often animal rennet (an enzyme found in the lining of a cow’s or goat’s stomach), so it’s definitely not vegan. However, like many vegan foods, plant-based substitutions are made that give it a similar quality to the real thing. Vegan “cheese” uses plant-based milk, nuts, oils, and vegetable proteins. Although Willa grew up on a dairy farm and has revolved her life around cheese, she also supports any customer who may want another version of cheese that’s acceptable for their lifestyle or allergies, whether it be non-dairy or vegan. Of all people, she understands the need for cheese (in any form)!

Sponsored by a vegan cheese company, Phoebe Winston is a vegan celebrity chef doing a demonstration to support her new book at Willa’s shop. She’s also an authenticity influencer. What’s that supposed to be?

Phoebe became famous for being a cut-throat contestant on a reality TV show, but once off the show, those same terrible behaviors got her canceled. She changed her image to one of kindness (hence, becoming vegan and rescuing a dog) and resurrected her celebrity status. Feeling constricted with her kindness identity, she created a new terminology—authenticity influencer. She wanted to make it trendy to embrace who you really are, in hopes of staying on top no matter how she was perceived and becoming the next Oprah. The only trouble was, she wasn’t authentic, herself.

What are stinging nettles? If they sting, how can they be used as an ingredient?

A stinging nettle is a plant (herb) with fine hairs that cause irritation when they touch the skin. Before cooking with stinging nettles, you have to brush off the tiny needles and rinse the leaves. They’re edible without harm after that.

I don’t remember gouda as being crumbly. Is it like blue cheese? What’s the history of gouda? What are the seven categories of gouda? How are they different?

Gouda has been produced in the Netherlands (where it’s pronounced “HOW-duh”) since the 12th century. The longer it ages (like any cheese), the firmer, darker, sharper, and more crumbly it becomes. Most of us are familiar with the young, mild form of gouda, which is why you’re surprised that the more matured versions can be crumbly. I would liken the texture to that of parmesan rather than blue cheese. The seven categories are based on how long the cheese has been aged.

“The first woman in line had sky-high heels, a pencil skirt, and perfectly slicked

hair that brought to mind that iconic Robert Palmer video.”

LOL, “The Addicted to Love” video? 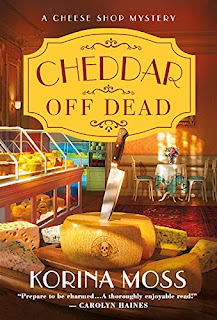 After Phoebe is outed as a nonvegan and is murdered, her Maltese, Buttercup, is passed around to those who can house him until another owner can be found. Willa takes a liking to him. Will she ever consider getting a pet besides her betta fish, Loretta?

I didn’t think it was fair for Willa to have a cat or dog, seeing as she can’t keep them in her shop, which is how Loretta came about. (Plus, fish don’t get enough cozy representation!) I did want an opportunity to have a furry friend in the series, so Buttercup arrives in Gone For Gouda. But, boy, when you’re writing, it’s hard keeping track of a dog in the story! I am a huge cat lover, so I do have plans to work a cat into the series in a future book. For now, Loretta rules!

Because Willa allowed her teenage assistant, Archie, to help Phoebe the day she was murdered, and Archie was the last one to leave the house according to the security cameras, he becomes a suspect. Willa must investigate to clear him and feels that his involvement was due to her actions. Willa pumps Heath, the detective, for information, but instead of emotionally venting, she’s learning to deal with him. How?

In Cheddar Off Dead, Willa had just met Detective Heath and didn’t know whether he was a good detective or if she could trust him. Now, she trusts him more and understands him better. She knows he always follow the rules, which might slow him down, but he is also a dogged detective. So instead of hiding things from him like she often did in the first investigation, she lets him in on the information she finds out. She still can’t help investigating with her friends, though. Because Willa is so close to and protective of Archie, it’s difficult for her not to be emotionally involved, and Heath is sensitive to this.

Willa decorates the outside of her shop with a straw cow she’s named Guernsey. For the fall festival parade float, she’s turning Guernsey into a scarecrow cow. How does she combine the two?

Not well, as is the running joke in the book. Willa’s first scarecrow is for the harvest festival’s scarecrow contest. Willa wants to represent Curds & Whey, so she decides to make a Guernsey cow she calls Guernsey. She does her best to shape her into a cow and uses felt to make her udder and brown and white coat. At first, Guernsey is just another craft Willa is bad at making, but the more people make fun of Guernsey, the more Willa loves her. Guernsey ends up becoming Curds & Whey’s mascot, stationed outside of the shop to welcome customers.

Those are all delicious Mexican foods. Carne asada is a spicy, marinated skirt steak, carnitas are the Mexican version of pulled pork, and pico de gallo is a chilled topping mixture made with tomatoes, onions, and jalapenos. Willa makes queso blanco in the book, which is a melted white cheese dip. I love Mexican food, so I had to incorporate it in the series, which is why the Let’s Talk Tacos truck is a favorite takeout place in Yarrow Glen.

Is a car’s computer system hooked to the internet? If not, how would someone possibly tap into it—some computer-to-computer link? Don’t you have to actually plug into it—like at a car repair place?

No. The computer systems of cars are connected to cyberspace, so they are vulnerable to being hacked. Hackers can wirelessly send commands to the dashboard functions, steering, and brakes. According to Upstream’s Global Automotive Cybersecurity Report, in 2022, there were over 900 cars hacked, 84.5% remotely.

Is cyser another name for mead?

It’s an apple-based mead. It’s still fermented with honey, like all mead, but it’s just another variety of mead.

Given the method of murder, I can understand Willa wouldn’t take a bubble bath. But, a spa evening for Willa is to pair cranberry scones and Teahive cheese together and eat it. Hard to believe. Does she ever have a massage and/or a mani/pedi?

That’s not really Willa’s style. She has so little time to herself, she would find it a waste of time. Her idea of relaxing is cuddling (such as it is) with Loretta on the loveseat with some good cheese and Alfred Hitchcock’s Rebecca on TV.

Who put you up to the puns in your blurb?

I wish I could take credit for all the puns on the book jacket, but they are courtesy of my editor, Madeline Houpt. She is the cheese pun queen. I wish I had her talent for puns!

What’s next for Willa?

Curds of Prey, the third book in the cheese shop mystery series, will be out in March 2023. It’s available for pre-order now. Here’s what Willa’s up to:

Murder again comes to Yarrow Glen, and cheesemonger Willa Bauer must be the predator… before she becomes the prey.

Yarrow Glen's favorite cheese shop, Curds & Whey, gets to be a part of the social event of the season: Summer Harrington’s wedding. Cheesemonger Willa Bauer is going all out for the wedding shower’s cheese bar. But the eagle-eyed Harrington family is proving to be a pain in her asiago. A last-minute tasting ends in disaster when one of Willa’s potential beaus, Roman, gets in a fight with the groom. Then the shower arrives, and while there’s anything but love in the air, there is plenty of cheese. Oh, and Roman... again. The day officially ends in disaster when Willa finds the groom—who also happens to be the mayor’s nephew—in the stable, dead as a dodo.  At the mayor’s request, Willa must follow the trail of cheese curds to find a killer while continuing to walk a tightrope between two of Sonoma Valley’s most powerful families. 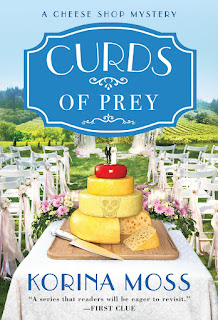 Congrats on your latest, Korina. Love the title!

Thanks for the interview, Elaine!

Fun interview for what sounds like a great book. Hope it's sales go through the roof.

Thank you so much, Kathleen!

Fabulous interview! Can't wait to dig into the book!

Nice interview, E.B. and Korina! Congratulations on all your success.