Before Evita: A Book Review by Warren Bull 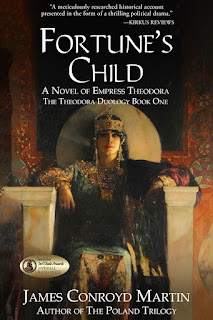 Fortune’s Child and Too Soon The Night  are two novels about Empress Theodora by James Conroyd Martin that trace the remarkable life of the woman who willed herself out of the lowest rungs of society to the very top of an empire. Dancer, actress, rape survivor, prostitute, mistress, mother, and empress. It had to be based on real history. Nobody would believe it as fiction.

In the interest of full disclosure, Jim is a friend. We are in the same critique group. I had the pleasure of watching a masterful author at work while both books evolved. Like many before me, I fell under Theodora’s spell and became madly in love with her early on. Relentless, scheming, brilliant, beautiful, seductive, and always dangerous.

Jim, tell the truth, weren’t you in love with her too?

How many years passed between the idea for these two books and publication?

I know you’ve won awards for The Boy Who Wanted Wings and your Polish Trilogy.

- The Independent Publisher Book Awards for The Boy Who Wanted Wings in 2017 and The Polish Trilogy Box Set in 2018. I felt honored.

With all the fascinating people in history, how do you decide who to write about?

ancestor, a Polish countess in the 1790s. That was Push Not the River. St. Martin’s Press asked

for a sequel and that got the trilogy going. The Warsaw Conspiracy completed it. In all my talks

at Polish clubs and festivals, the Battle of Vienna kept coming up. King Jan Sobieski leading the

an indelible imprint on people and history that I determined to create a story about it. To make

it different and establish the theme of “the other,” my main character a Tatar raised by Poles

The reviews are great. Have these books earned your best reviews?

- The duology about Theodora has probably brought the best reviews. In Chanticleer’s 2019 book awards, Fortune’s Child not only won its category’s (Chaucer) Grand Prize, but it also won their Overall Best Book Award over a total of seventeen categories. Amazingly, Too Soon the Night followed that up with another Chaucer Grand Prize, 2021.

Too Soon the Night

Both of these books sound fascinating. Thanks for putting them on our radar, Warren!

Thanks for an insightful interview. On my TBR list.

Thanks for an introduction to a new to me writer!

Thanks for the heads up on an author with whom I am not familiar. I do like historic fiction. These are worth a look.