An Interview with Allison Brook (Marilyn Levinson) by E. B. Davis

Librarian Carrie Singleton is back on the case, alongside library ghost Evelyn, in the sixth installment of Agatha Award nominee Allison Brook’s Haunted Library mysteries.

Carrie Singleton is just off a hot string of murder cases centered around the spooky local library in Clover Ridge, Connecticut. She could really use a break—but no such luck, as she; Smoky Joe, the resident cat; and Evelyn, the library’s ghost, are drawn into another tantalizing whodunit.

First, a dead body is found in the basement of the building attached to the library, and it turns out to be Carrie’s fiancé’s Uncle Alec, who Dylan hasn’t seen in years. But Alec has no intention of truly checking out, and his ghost makes itself at home in the library, greatly upsetting the patrons. Carrie and Evelyn work hard to keep Alec out of sight, but what was he doing in Clover Ridge to begin with? And why was he killed?

Meanwhile, the town council, of which Carrie is also a member, is embroiled in a hot-headed debate over the fate of the Seabrook Preserve, a lovely and valuable piece of property that runs along Long Island Sound. Turn it into an upscale park? Sell it to a condo developer? Or keep it as protected land?

As the dispute rages, there’s another murder, this time involving a council member. Could the two murders be connected? And could Carrie be next on the hit list? 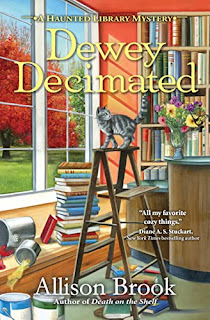 What I like best about a series like this one is the level of detail that each book unfurls, revealing more about each character. Since Carrie and Dylan became engaged, and marriage is all about family, Carrie is curious about Dylan’s relations and how he was brought up. She knows some of his background since Dylan was good friends with Carrie’s late brother as kids, and her aunt and uncle provide a bit more to the story. Dylan seems hesitant to tell her. What he does say about his parent’s isn’t good. But meeting his Uncle Alec gives her a first-hand look, even if the man’s been dead for a good while.

Due to Aunt Harriet and Uncle Bosco living on the town green and her uncle’s position on the library board (and also his past on the town council), I thought they were financially well off. Now I realize that they lost the Singleton Farm. Was I mistaken or did they financially recover from that loss?

They aren't wealthy, but they're comfortable. They sold the farm to Dylan's parents, who didn't give them the best price, but they were lucky to buy the house on the Green at a good price.

Carrie categorizes Dylan’s upbringing as a case of benign neglect. Is there really such a thing as benign neglect? How can neglect ever be benign?

That is an expression to describe a way of rearing a child without really considering his or her needs. Those parents give their child or children the necessities of life, but not the attention and emotional support they require.

Although Carrie’s father was in and out of jail during most of her formative years, he now appears to be the better parent. Remind readers why Carrie isn’t close to her mother. Does her mother have Carrie’s ability to see ghosts?

Carrie always adored her father and was very hurt when he often stayed away from home, even when he wasn't in jail. But in Read and Gone, Jim Singleton comes back into her life and makes every effort to show Carrie that he loves her. What's more, he turns his life around and now works in the investigation agency that Dylan and his partner Mac own.

Carrie's mother was never maternal. She is self-absorbed and manipulative. In Checked Out for Murder, Carrie spends time with her mother when Linda comes to Clover Ridge because her husband is in a movie being filmed there. Carrie helps her mother get through some emotional upheavals when she's in town. While she and her mother will never be close, Carrie now understands her better.

No, Linda cannot see ghosts. The only relative of Carrie's who can is her little cousin Tacey.

Did Dylan inherit the estate they live on? Why does Carrie seem to have an aversion to the manor house, where Dylan lives?

Yes, Dylan owns the estate that once belonged to his parents. Carrie finds the manor house formal and stuffy and doesn't want to ever live there when she and Dylan are married.

Evelyn used to work in the library and has gone to her rightful place years earlier. She reappears in the library to interact with Carrie because she's been charged with being a kind of guardian angel for people who live in and visit Clover Ridge. Alec's body was hidden away for years and is disturbed by the workers who are renovating the building. His ghost staggers into the library through an opening between the two buildings. Alec has no idea where he is or why. He doesn't even know his own name. While Evelyn is invisible to everyone but Carrie, Alec can be seen by people in his ghostly form. As he lurches through the library, his agitation helps to create a gust of wind that causes pages to flutter, books to fall, and patrons to wonder what just passed them by.

Though both Evelyn Havers and Alec Dunmore are ghosts, they are on different planes. Evelyn has a role to play when she returns to our plane. Alec has to go to his resting place, but can only do so after certain conditions are fulfilled. Evelyn has the responsibility of helping Alec move from one plane to another.

Carrie has fessed up to being able to see ghosts to Dylan. Why does Dylan have mixed feelings about meeting with Uncle Alec?

When Dylan was young, he adored his uncle Alec and thought he was the most fascinating person. But Alec proved to be as unreliable as Dylan's father said he was, often disappointing Dylan. What's more, Alec was involved in one shady business after another.

Does Uncle Alec have unfinished business that he must attend to before he can go onto the great beyond?

Alec's murderer must be discovered before Alec can go to his rest. And even after that happens, one more mystery must be resolved.

Julie is brilliant at what she does—unraveling secrets and gathering information—but her people skills are lacking. Sometimes she's downright offensive, as when she badmouths John Mathers for not solving Alec's recently discovered six-year-old murder in a matter of days.

Julie puts Carrie in an uncomfortable position by belittling John Mathers’s police investigation, who is a friend of Carrie’s. But she goes further, wanting to team with Carrie to solve the crime before John can. Why does Carrie finally agree?

Carrie is well aware that Julie has access to research and researchers that will be useful in solving the two murders. Since Carrie is investigating Alec's murder anyway, she decides she may as well team up with Julie.

How did Julie find out that the corpse was Uncle Alec?

Julie has access to her newspaper's extensive resources. She also has people doing research for her.

What is Dylan going to do with the painting and the money?

Dylan is going to donate the painting to an art museum and keep the money he inherits from his uncle.

Bests of luck with the latest in the series.

For the next series, are you planning all new characters or spinning off a character from this series?

Good interview! The Haunted Library is lots of fun, Marilyn. I look forward to finding out what you do in the new series.

The Haunted library is so much fun. It's bittersweet when a series ends, but I'm looking forward to your next series.

Best wishes as you finish one series and start anew on your next.

Love the "library books." I'm sorry to hear that the series is ending, but pleased to know there is one more to come.

Thanks so much for your kind words about the series, Jim, Molly, Shari, Margaret and Kathleen. I've written the seventh book and mentally planning the eighth. And of course I'm looking forward to creating an entirely new cast of characters in a different setting. Isn't creating your own world fun???

I love this series. I'm sad that eight will be the last - maybe some novellas?????