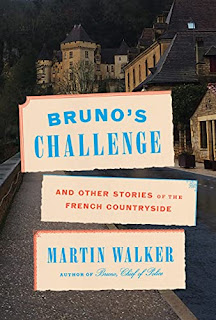 I’ve enjoyed reading Martin Walker’s fourteen Bruno, Chief of Police books set in the Dordogne region of France. Before the recent release of the latest in the series, To Kill a Troubadour, Walker published a collection of Bruno short stories, Bruno’s Challenge, some of which have been included in his cookbooks.

Most of the stories are centered on the outdoor market square in the fictional rural town of St. Denis. Bruno patrols the market, settles disputes amongst the stallholders, and protects the local farmers from disputes with the E.U. food inspectors.

In his short story collection, “Oystercatcher” is set during the week between Christmas and New Year’s. Bruno is seconded to investigate thefts of oysters from the beds in the Bay of Arcachon during the week when most residents of France purchase oysters to welcome the New Year. Bruno is joined by his sometime lover, Isabelle, an intelligence officer based in Paris.

Bruno is pleased to learn that the local police will rely on artificial oysters equipped with transmitters tracked by drones overhead, though he is uneasy with the low number of police officers stationed at roadblocks. Alas, heavy fog descends, the drones are useless, as are the naval patrol boats. As usual, Bruno, with Isabelle’s assistance, saves the day.

“Bruno and Le Pere Noel” reminds me of K.M. Rockwood’s Christmas stories. In addition to his duties as the French version of Santa Claus, Bruno must find a prisoner missing from his halfway house, whose ex-wife and son live in St. Denis. Using his intuition and a borrowed canoe, Bruno locates the man and houses him over the Christmas holiday.

Why does Bruno advocate so strongly for the prisoner? “A boy should have a father…I never had one.” (p.237)

This tender holiday story includes in the narrative a mouth-watering recipe for Bruno’s magical goose stuffing: prunes stuffed with foie gras, with additional slivers of foie gras tucked under the goose skin.

Walker’s collection of St. Denis marketplace vignettes and stories enhances the backstories of the large cast of secondary characters in his books. Detailed instructions for food preparation create a fulfilling narrative.

Thanks, Margaret! Definitely looking for this.

Definitely a book to go on my TBR (soon) list.

I find I enjoy the flavor of mysteries set in France. One of my all-time favorites is quirky The Awkward Squad (a French police squad, not the trade union organization in Britain) by Sophia Henaff. Unfortunately, most of her work has not been translated to English, and I, alas, do not read French.

Kathleen, I'll check out Sophia Henaff. Thanks for the suggestion.