A is for Arsenic by Molly MacRae

In fact, so much fun, I’m stealing her idea and posting my own using the letters in Argyles and Arsenic, book 5 in my Highland Bookshop Mysteries. The series is about four women from the Midwest, ready for a change, who pool their money, buy a bookshop on the west coast of the Scottish Highlands, and move there to run it. It’s Scotland! The Highlands! What could possibly go wrong? 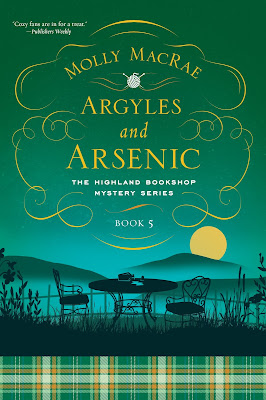 A is for arsenic – King of Poisons, Inheritor’s Powder, the People’s Choice. Did someone put arsenic in Wendy Erskine’s teacup during Violet MacAskill’s party?

R is for red herrings. There are plenty of them. Will the four women of Yon Bonnie Books be able to sort through them before the villain strikes again?

G is for guilty. Someone is guilty. Is it the owner of the Mr. Potato Chef food truck? The unidentified woman at Violet’s party who said she was going for help but apparently didn’t? Surely it can’t be Violet’s granddaughter Isobel.

Y is for Yon Bonnie Books. The four women who own the bookshop and adjoining tearoom are a clever crew of amateur sleuths but, with this villain, have they finally met their match?

L is for the lies being told. Who can the sleuths trust? Who can they believe?

E is for eccentric. Violet, at 93, is somewhat eccentric. So is her son Edward. Also Kyle Burns, one of the competition knitters you’ll hear about in the next A. But does eccentric mean guilty?

S is for secrets. There are even more secrets than red herrings.

A is for the argyle socks people are knitting for the Rocking the Stocking knitting competition.  Participants are following the pattern for traditional Inversgail stockings and knitting in various businesses around town, including Yon Bonnie Books.

N is for Nana Bethia, the constable’s grandmother. She’s a dear wee woman and one of the judges of the knitting competition. But she was at Violet’s party and she has a habit of putting things in people’s tea . . .

D is for decanting and decluttering – that was the theme of Violet’s party. Guests were invited to have a glass of sherry and help her declutter her fantastic manor house by taking home whatever they liked. Did someone take home the arsenic she kept in the potting shed?

A is for against. Violet’s daughter Teresa was against the party and made sure everyone knew it.

R is for Ranger. Ranger is the Cairn terrier who “works” at Yon Bonnie Books. He spends most of his time napping in one of the chairs near the fireplace, but he has a keen nose for trouble. He doesn’t seem to trust Kyle. And what does he really think of Edward?

S is for S.C.O.N.E.S. – the Shadow Constabulary of Nosy, Eavesdropping Snoops. That’s the name someone gave the women at Yon Bonnie Books. It was supposed to be an insult, but the women embraced it. Despite their unorthodox methods, they’ve helped the police with several murder investigations. And now that his grandmother is under suspicion, Constable Hobbs calls on the S.C.O.N.E.S. again.

E is for eat. Would you eat food from the Mr. Potato Chef food truck with rumors swirling about food poisoning? And arsenic?

I is for incident. There’s been another incident. The poisoner struck again. Will the S.C.O.N.E.S. solve the crime and save the day?

C is for cozy. Argyles and Arsenic, a cozy mystery, is book 5 in the Highland Bookshop Mystery series. Available in hardback and e-book, look for it at any bookstore or ask for it at your public library. A comfortable chair, a cup of tea, a scone, and a good book – that’s a recipe for a perfect afternoon or evening. Welcome to Scotland and happy reading!

An inventive way to distribute a lot of good information, Molly. And fun!

These posts are so much fun!

Lots of fun! And it inspires me to add something to my TBR list.