Thanks for inviting me over, Annette and the other Writers Who Kill! I’m delighted to be back.

I am also a writer who kills, of course, although my sleuths or others in town find the already-dead body. But for this post I want to talk about the wedding that anchors the action in Murder in a Cape Cottage, which comes out Tuesday. 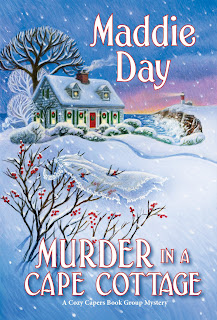 Tim Brunelle has been Mac Almeida’s boyfriend for the entire series. He’s been eager to marry and start a family. While Mac is worried about her orderly life being thrown into turmoil, she does love him deeply, and family is important to her. She says yes.

While planning a fictional wedding for book four isn’t as complicated as a real-life one, I had all the same things to think about. When will it be? Where? What are the bride’s colors, who are her attendants, what will guests eat and in what décor? SO many details. My older son was married four years ago, and my younger son will tie the knot in February, so I guess I have weddings on the mind!

I remember when Annette was planning Zoe Chambers’s wedding a few books back. Annette presented dress after dress and quizzed fans on which would be right for Zoe. It was a great promotional scheme, but I didn’t copy it. Here’s a bit from the book describing how Mac found the dress.

With the high metabolism I’d inherited from my tiny dynamo of a grandmother, I still sported a slender figure at thirty-seven. When Gin and my mom and I had started looking for wedding dresses this fall, I’d been worried. I so wasn’t the lace-and-ruffles type, and I also didn’t want some strapless extravaganza.

By some miracle we’d happened across a simple, body-hugging satin dress cut on the bias, and we’d found it right here in Westham at Cape Bridal, a new shop on the outskirts of town. The cream-colored dress—also comfortable, as it turned out—had a flattering scoop neck, pintucked short sleeves, and a short train that could be buttoned up and out of the way for dancing.

I wish I could show you a picture of the dress – except I made it up!

I also had fun thinking of colors – purple and yellow – to accent Mac’s New Year’s Eve wedding. She invites her five-year-old niece Cokey to be flower girl, and Cokey is thrilled. Gin is Mac’s only attendant, for which she wears a purple tea-length sheath dress in a shimmery fabric. Mac’s mom finds a pale yellow dress with a swirly skirt that falls below the knees and a short lace sweater in the same color. After the ceremony at the Unitarian Universalist Church where Mac’s father is the minister, the reception will be at the Westham Hotel, with yellow and purple flowers.

Also fun was dreaming up the wedding cocktail to be served before the reception. As the series is set on Cape Cod, where cranberries are grown, I wanted it to include cranberry juice. Mac’s grandmother Reba works with her to refine the ingredients. I presented the scene and recipe over at Mystery Lovers’ Kitchen earlier this month. 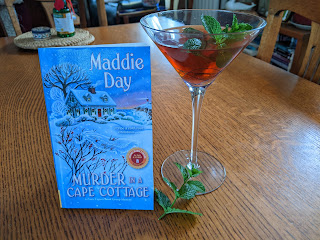 Mac will meet Tim’s parents for the first time the day before the wedding, and you can believe she’s nervous. Mac’s father, brother, and Tim take charge of cooking up a Cape Verdean meal for the rehearsal dinner, and it all turns out fine.

You can be sure this book isn’t only a lovely little tale of the week before the wedding. Being crime fiction, the story must include a big old wrench in the works. In this case, the wrench smacks the reader on the head in the first chapter. Five days before their wedding, Mac and Tim discover a decades-old skeleton in the wall of their house – an imprisoned skeleton wearing a wedding dress.

Murder in a Cape Cottage

ʼTis the day after Christmas, following a wicked-busy time of year for Mac’s bike shop. It’s just as well her Cozy Capers Book Group’s new pick is a nerve-soothing coloring book mystery, especially when she has last-minute wedding planning to do. But all pre-wedding jitters fade into the background when Mac and her fiancé, Tim, begin a cottage renovation project and open up a wall to find a skeleton—sitting on a stool, dressed in an old-fashioned bridal gown . . .

As Mac delves into the decades-old mystery with the help of librarian Flo and her book group, she discovers a story of star-crossed lovers and feuding families worthy of the bard himself. Yet this tale has a modern-day villain still lurking in Mac’s quaint seaside town, ready to make this a murderous New Year’s Eve.

“She’s handcuffed to the wall,” I whispered. “The poor thing. Somebody seriously didn’t want her to get married.” My heart broke for her, but this was also feeling like a horror movie. My own wedding was only days away. 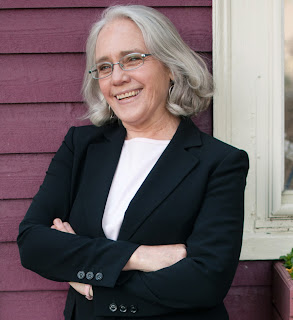 I like a little mishap leading up to the wedding.

And it's there, plenty of it!

Sometimes I like the wedding to go smoothly and have the upset at the reception...

That could happen, too! Just not in this book.

Congratulations on the new book, Edith. It sounds like so much fun!

And thanks for the shoutout to my search for Zoe's wedding dress prior to TIL DEATH.

For me, naturally it has to be my own. What was unusual was we did all the planning over the phone, packed up my parents and drove to 9 hours to another state to hold it, had to meet with the county judge the morning of to get the waiting period waivered and that it all turned our perfect with no hiccups at all - only a few nervous moments wondering if it would all fall in place. We did all this so hubby's grandmother, who we both adored, could attend. Since she wasn't able to travel, then it meant for her to attend that we had to move the wedding.

I'd be remiss if I didn't mention my parent's wedding though. Nothing fancy, just a courthouse wedding. However, they met on a blind date and were married 7 days later on Valentine's Day. They had almost 60 years of true love before my Dad was called up to heaven. Most definitely an example of true love.

Congratulations on this newest book! Love your books and would love the opportunity to read and review this one. Thank you for the chance to win a copy!
2clowns at arkansas dot net

I remember at one of my niece's weddings it was very warm and everyone was taking pictures of the cake and then all of sudden the cake started ti slide and it looked like it was going to fall. Someone caught it in time and put it in the refrigerator. Saved the cake .
Lois Rotella- rainonlois@aol.com

Congratulations on the new book…I can’t wait to read it! When I think of weddings, I think of my parents. My dad was in California with a group of coworkers working on a special project at Edwards Air Force Base. A few days before the new year, my grandparents drove my mother from Dallas to California so she and my dad could get married. Because California had a three-day waiting period for a marriage license and my grandparents had to be back to Dallas to work on the following Monday (a several day drive), my mom, dad, and grandparents drove to Las Vegas. Just after midnight on New Year’s Day 1953 (a Thursday that year), my parents got married in a wedding chapel just off the Vegas Strip. On the trip back to California, they stopped at a motel to spend the night, but because of the holiday, there was only one vacant room available, so my parents spent their wedding night in a motel room with my grandparents. They were married 56 years before my dad passed in 2009. cking78503(at)aol(dot)com

My "wedding" was hardly in the same category as any of these.

We decided to get married, but we were dead broke, family was not happy (2nd marriage for both of us,) and we were planning to move out of state for a new job.

We got the license and the then-required blood tests, but the logistics continued to present problems. One Saturday morning, a friend came over. We asked her to babysit, and when she agree, we headed to Chicago city hall.

The wedding itself maybe wasn't much, but the marriage lasted for 47 years until my husband passed away.

At our daughter's wedding, the bottom layer of the wedding cake was damaged in transit. We were so sad! The caterer said they would take care of it. They removed the bottom layer to slice into cake servings. They transferred the upper layers to the cake display for the cutting of the cake and all was well!

Can’t wait for this book to arrive in my inbox!

Wedding mishap--- My first husband and I were married in a park in South Florida on the shores of a lake. This was the 70s, our dogs were present, so were all of our friends. The notary was almost killed in a car crash on the way to the service. She showed up bloody, but undaunted. Should that have been sign? Maybe. After the ceremony, my new husband and I collected the camera from my dad who had volunteered to serve as photographer. We stopped off at the Photomat and discovered the camera had no film. Dad never thought to check. Maybe that should have been a sign, too! LOL.

I was the maid of honor for my sister. As I started down the aisle, I heard her behind me, saying words that would make my mother blush...the florist had not delivered the flowers for the altar. Fortunately, my sister and a friend had done our bouquets, the corsages and those for the guys, so they were there. Needless to say, I was very happy I was not on the receiving end of the call to the florist that next week.

Thank you for hosting me, Annette!

Kay, your parents had an amazing marriage, and to have known each other for only a week.

Lois, close one on the cake!

Christi, they wanted to be married - and it happened. A lovely story.

KM, it's the lasting relationship that counts.

Nancy, you definitely had a resourceful caterer.

Kait, thank you. I hope you love the story. Sometimes we have to listen to those signs, don't we?

My nephew got married at Taco Bell in Los Vegas. It was really a nice wedding.

Marcia, I hear you!

Kaye, it's the love that counts.

Love, food, and stories <3 My own wedding was so informal, courthouse, two witnesses, pizza and Kahlua afterwards. We were rebels. ;-) My favorite is probably my Ren. Faire friend's wedding, with kilted gentlemen from his family, a variety of costumes from her many theater friends, and much loving entertainment and dancing. I told "The Blue Rose" and my young niece gave the bride and groom blue roses. <3

That friend's wedding sounds so fun!

My favorite wedding memory is singing at my best friend's wedding - how nervous I was, how well it went, how relieved I was that it was over! Congrats on the upcoming release, and thanks for this opportunity!