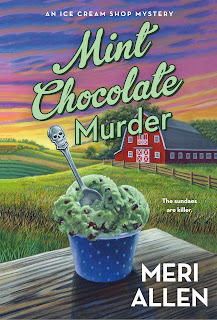 Writers of the culinary cozy mystery generally include a recipe or two with each book. Readers expect it. Making the recipes is a wonderful way for readers to enter into the world of the book. It seems cruel to describe a fabulous meal or dessert without giving readers a way to enjoy it in real life. Also, readers have told me they like to serve recipes from a story when they host their book club to discuss the book.

Those expectations are important. When you write in a genre that has firm reader expectations, you ignore  them at your peril. Woe to the author who doesn’t give the readers what they want.

Reader, I am that woeful author.

My most recent book, MINT CHOCOLATE MURDER received many positive reviews. I know this because my daughter reads them for me. I don’t read them myself because stumbling on a bad one can squelch writing mojo. She does share feedback when she thinks I need to hear it. Readers were generous with their praise of MINT CHOCOLATE MURDER, but two complaints rose to the top like cream on a bottle of milk and I have to take ownership.

True confession time – and a peek behind the curtain of the publishing process.

When I turned in the manuscript for Ice Cream Shop Mystery #2, also known as the one with the haunted castle, I’d originally titled it THE COLD ART OF MURDER. The killing (no spoilers!) takes place at Moy Mull, Penniman’s art colony, during a fantasy ice cream social. I thought the title worked well and rather liked it.

But…my editor thought we needed a naming convention to tie the titles of the series together, like Sue Grafton’s alphabet titles, or “The Cat Who” series, etc. That, dear reader, is why we have editors. This great idea never occurred to me. So after some trial and error (MURDER A LA MODE) we hit on having a flavor in every title. We both loved the sound of MINT CHOCOLATE MURDER and the publisher greenlighted it.

But..all this happened after the editing process was completed and the manuscript went into production. Small copyediting mistakes are easy to fix, but any substantial changes to a manuscript that’s already been through the production process are too expensive to make. 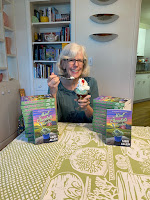 Frankly, I didn’t give the title a second thought until I heard the reviews: “Where’s the mint chocolate ice cream?” “Loved the book, but no mint chocolate!” “Why call it MINT CHOCOLATE MURDER when it’s all pumpkin spice?” (There’s a pumpkin spice recipe in the book – maybe we should have called it PUMPKIN SPICE PERIL? Nah. )

Mea culpa. So to make up for it, here’s a recipe for mint chocolate ice cream. And a promise – the next book, FATAL FUDGE SWIRL, will have plenty of fudge swirl ice cream.

Readers, do you have expectations for the mysteries you read?

In a medium sized, chilled bowl, whisk (or use a hand mixer on low) to combine the milk, sugar and salt until the sugar is completely dissolved.

Stir in the heavy cream, vanilla, and mint flavoring.

Cover and refrigerate at least 2 hours.

Whisk the mixture well then pour into ice cream maker.

When the mixture starts to thicken, at about 40 minutes, add the chocolate chips a little at a time. When you use an ice cream maker, the mixture is the consistency of soft serve when it's done. You can serve it right away, or put it in the freezer to harden if you prefer (use an airtight container).

If you'd like a little minty green color, go ahead and add a few drops of food color. Enjoy!

Yep, I can see readers being a little miffed at that. I've been lucky enough that no publisher has changed a title on me at the last minute, which means even when a title has changed, I've had the opportunity to make sure the story includes at least one meaningful reference.

A good lesson to remember! Refer to the title at least once.

Can’t wait to see what flavor is next.

Yum. So much for lunch - it's ice cream time!

I had wondered about the absence of mint chocolate chip references then decided that it was an editorial decision. In any event, it did not distract me from loving the book, and I made up for it by buying a container for my personal enjoyment!

I have to admit that I was so enthralled with the mystery when I read the book that it never occurred to me to wonder about the mint chocolate ice cream.

Hi Jim, I did notice the connection to Seamus' granite oath - such a great title!

KM and Kait, I'm so happy you liked the book - and apologies for the ice cream cravings!

I loved this book but I definitely kept wondering when Mint Chocolate was going to come in to play. :)

I almost made the same mistake with my third book, Curds of Prey, not having any cheese curds! I sure hope this makes it up to your readers, lol!

I think I’m guilty of having mentioned the lack of Mint Chocolate ice cream in my review. I guess I do usually expect that the title will have some link to the book in a cozy mystery series. There was a lot of pumpkin spice even though your main character didn’t seem very thrilled by it,