“Opening Yourself to the Darkness”: An Interview with Author Marie Sutro


Marie Sutro is one of the most lovely, sincere, and generous writers you could know. Her subject matter: psychopaths and serial killers. It seems inconceivable, but she creates monsters who are incredibly real and believable. To read one of her books is to discover the motivations of persons who have no capacity for empathy, yet it’s Marie’s ability to empathize with these unimaginable people that leads her to develop such multifaceted antagonists.

Her protagonist, Kate Barnes, who has grown up with adversity and deals constantly with trust issues, is the perfect character to seek out justice. Whether tracking down killers or facing her own demons, Kate’s journeys keep readers on the edge of their seats.

We’re so happy to welcome Marie to Writers Who Kill.

Marie, your first Kate Barnes novel is based in San Francisco, where you grew up and where your family has served in law enforcement for three generations. Did you always know you wanted to write about a police detective?

I knew I always wanted to write mysteries, and crime happens to be my favorite subgenre. At first, I was nervous to take on a police detective because I had never actually been a police officer. As it turned out it was the best possible decision. My father passed away as I was nearing the end of writing the first book. We were very close and I still miss him every day. I am so very grateful I was able to call him for questions and share part of the journey with him. I cannot imagine there will ever be a book I will write that will hold my heart like the one I wrote with input from my dad.

What has been your family’s reaction to the series?

The biggest reactions came in response to the first book. The level of darkness in the stories caught some off guard. By the time the second book came out, everyone had gotten used to the idea that I write some heavy content and that I’m willing to explore some dark topics to do so. 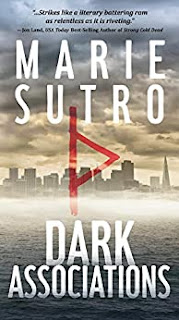 Kate recognizes that she lives in a dark place and struggles not to inflict that upon others. What makes Kate such a loner, what she has personally experienced or what she has come to view as justice?

Kate is a product of her past. A traumatic childhood with a chemically dependent parent and the premature death of her only sibling left her extremely distrustful of others and herself. With the exception of her partner, she does not trust many people, and even that relationship has it limits.

Having experienced so much injustice in her formative years, and having seen the weaknesses inherent in the justice system she is at once desperate for justice and extremely skeptical about achieving it.

Guilt seems to be a primary motivator for Kate and makes her the perfect protagonist to fight against villains who don’t have the capacity to feel guilt. In writing Kate’s stories, what did you learn about guilt? While it may seem to be a weakness, do you think it may be Kate’s strength?

I was fascinated to discover guilt can be a learned behavior. Young children are often entirely narcissistic in their motives. It is incumbent upon parents to point out when their behavior had adversely effected someone else and to impress upon them that they should feel regret every time they do it. Parents succeed by appealing to the child’s sense of empathy for the other person, which eventually makes them feel guilty about it. A healthy and balanced parent can instill a healthy and balanced sense of guilt. Unfortunately, the converse is also true.

Suffering from a crippling sense of guilt, Kate is easily manipulated by a villain all too eager to exploit her weakness. At the same time, this horrible burden also drives her to extraordinary lengths, becoming her superpower.

Your debut novel, Dark Associations, takes place in San Francisco while your second, Dark Obsessions, occurs in Washington State. You have connections to both settings. What made you decide about the change in setting and how did you use each location in developing your plots?

Originally I conceived of Kate’s story in a three-book arc. The second book was intended to focus on Kate confronting her internal demons. It was supposed to be set in Seattle, but the more I thought about the nature of the issues she needed to confront, the more I became convinced that the remote reaches of the Olympic Peninsula was the best place for her to confront both personal and professional challenges.

Interestingly enough, both books are primarily set on Pacific Coast peninsulas. Yet, the regions are vastly different. San Francisco is a bustling metropolis, full of human activity and development, while the Olympic Peninsula is a vast natural world where humans exist only in brief pockets.

In Dark Associations, I relied upon the dynamic nature of San Francisco and the greater Bay Area to vary scenes and create plot twists. The vibrancy and diversity of the region is mirrored in the way the story unfolds. In Dark Obsessions, the remoteness and the relative lack of human development in the region is also strongly reflected in the plot and subplots. 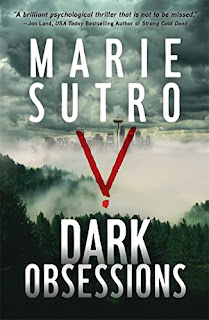 The antagonists in your novels are frightening. What was it like having to live with such scary people during the course of writing your novels?

The key to writing convincing and compelling characters starts with empathy. Unfortunately, opening yourself to the darkness and having it occupy headspace is always a bit of a dance with the devil.

I’ve learned to put limits on how much time I spend either researching my villains or writing them. Changing the mental channel either by taking a walk, playing with my cats, or watching cartoons creates a nice respite from the intensity.

You use description to great advantage in bringing alive situations. How did you develop your skills in using description to make scenes more real and compelling?

Keeping a reader’s interest is a primary goal. I was lucky enough to be mentored by an exceptionally gifted thriller writer. He helped me develop an eye for determining the most relevant and interesting ingredients for each scene. Every detail is evaluated for its ability to immerse the reader in the moment, without going too many heartbeats before the plot becomes an afterthought. As such, I tend to rely heavily on powerful imagery and evocative sensory inputs.

I’m also a huge fan of Alfred Hitchcock, and write every scene as if I am sitting behind the camera. Setting the stage, putting the actors in place, and figuring out where the camera should be pointed at what moment is the real work. After that, all I have to do it write what I see.

Tell us about the symbols on the cover of each book, how you selected them and how they drive the stories.

The symbols on the covers are the first puzzles the reader is exposed to in each story. In Dark Obsessions the epigraph includes the symbol as well as an ancient Norse poem which sets the tone for the story. The symbol is soon revealed to be a Norse Thorn. It is an ancient Nordic rune used as a calling card by an insidious serial killer known as the Tower Torturer. Known as Thursiaz, it was chosen for (among its many meanings) its association with male power and dominance.

In Dark Obsessions the cover symbol is an original design based on ancient concepts pivotal to the final reveal. After lengthy research and considering different possibilities, I designed it on a cocktail napkin while having dinner with my husband.

Have you written or do you anticipate writing short stories about Kate Barnes?

I do hope to write some short stories featuring Kate. Her future is as interesting as her past, so there is plenty of fertile ground to visit. I’m also intrigued by the prospect of a short story that would take place during the timeframe of one of the existing books.

What has been the most surprising reaction to your novels?

The most surprising reaction has been how vested some readers have become in the stories, the issues raised within them and the characters themselves. Even though it is what I am working toward in every novel, it blows me away when someone takes up a sword to defend Kate to me, or expresses sorrow when Kate fails to uphold her own standards. When a reader becomes teary-eyed because they empathize so completely with her struggles, I’m often left wondering whether I had anything to do with these stories at all. Maybe I’m just the one typing.

Thank you so much, Marie, for spending time with us at Writers Who Kill.

Marie Sutro is an award-winning and bestselling crime fiction author. In 2018, she won the IBPA Benjamin Franklin Award for the Best New Voice in Fiction, for her debut novel, Dark Associations. Her second novel, Dark Obsessions, was released in April 2022. A member of Sisters In Crime, she also volunteers with California Library Literacy Services.

Her father, grandfather and great-grandfather all served in the San Francisco Police Department, collectively inspiring her writing. Marie resides in Northern California and is currently at work on the next book in the Kate Barnes series.

Posted by Paula Gail Benson at 1:00 AM

Congratulations on your second release. Wishing you and it the best.

Sounds fascinating. I love psychological suspense! I've have to check these out.

Jim, Shari, and Kathleen, thank you so much for your terrific comments. Marie, may Kate Barnes have many more adventures ahead to share with us!