My Best Source for Ideas: The Quickening By Katherine Ramsland

My Best Source for Ideas: The Quickening By Katherine Ramsland

As soon as a producer suggested I write fiction based on the quirky things I do, I flashed on my next project: a series about a forensic psychologist who consults on unique investigations, including those with paranormal reports. (Yes, I do those things.) The first novel in my Nut Cracker Investigation series is now published, and I Scream Man was quickened into existence. It chose me.

I’ve been writing for nearly four decades, leaping from genre to genre. I’ve covered philosophy, psychology, self-help, biographies, companion guides, and immersion journalism. Now I mostly write about forensics and crime. After some 69 books, 16 short stories, several scripts, and hundreds of articles and blogs, I’ve covered a lot of ground.

I’m often asked where I get ideas. A few come through suggestions or requests, but mostly I find them in my research. As I move through books full of themes, images, and ideas for potential projects, the one that quickens will beckon. It will take my breath away, as if it’s been gestating in me, waiting for me to notice it. I will feel that I must start on it right now. If I can’t, it will stay with me. It belongs to me. In fact, the Nut Cracker series came to me a dozen years ago. Only now did the right set of circumstances converge to write it and get it published.

Quickened ideas trigger a fluttery quality that makes my heart beat fast. I recognize them. I’m fused to them. Some might say this is just another word for inspiration, but it’s much more. I have many inspirations that flare bright but fade fast or that merely get me through a scene. The quickening endures. It’s personal. When I come across it, everything stops. The world recedes. My focus sharpens. I must attend to it.

For example, when I read about Professor James Starrs exhuming bodies to re-evaluate cases with new forensic science, I had to be on his team. Everything I’d done to that point had prepared me. I contacted him. My passion persuaded him, and not only did I get on his team but I also wrote his casebook, A Voice for the Dead. Another time, when I heard about the sale of a house near me where a triple murder had occurred, my interest in home renovation converged with my expertise in crime to write a pitch for Murder House Flip.

I should say that not all ideas that quicken for me gain my agent’s approval. And this breathless sense of rightness has not been the catalyst for all of my work. However, quickened ideas that do produce articles, stories, and books have been my favorites to write. The passion from them never dims. There’s no writer’s block.

So, what’s the source? What makes these ideas mine?

The quickening appears to blend my most avid interests with my goals, which forms into a focused vigilance. Once they all converge in a discovery, I gain momentum. For I Scream Man, I wanted weather to be part of my plot, so I researched hurricanes and watched every relevant video I could find. I wasn’t looking for anything specific, just taking it all in. Then I spotted the unusual phenomenon of hurricanes that kill themselves. My psychologist, Annie Hunter, is (like me) a suicide consultant. The concept of a self-destructive tempest quickened into my central metaphor, which played out in several ways in the tale. Such a discovery feels so pressurized to me that I must home in. I can’t not write about it.

To enhance the chance of a quickening, I read in many areas beyond my expertise. I also meet other types of experts. The more my world expands, the more potential I gain for these lightning-rod ideas. I’ve even acquired co-authors merely from attending conferences and getting the vibe from something they’ve said.

Quickened ideas transcend other subjects that might be just as viable but don’t grab me as forcefully. The more I learn, the more sensitive I become to nuances that might spark the sudden muse. The quickening works because the ideas to which I resonate emerge from what I’ve already prepared. It’s waiting inside my deepest wells to spring out and grab me when I draw near. 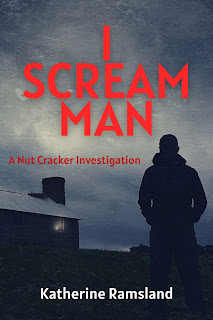 When a boy vanishes under strange circumstances, forensic psychologist Annie Hunter collects her team of sleuths, the Nut Crackers. They link the boy to a network of powerful people, the “I Scream Men,” who gain political favors through a juvenile sex trafficking ring. As Annie tries to hide a victim they seek to silence, head predator Alder Plattman – nicknamed “Plat-eye” – snatches her young daughter. Relying on coded clues, some quirky allies, and the mysterious method of remote viewing, Annie sets out to rescue her daughter and cripple the criminal network. Among her associates is attorney Jackson Raines, a youth advocate whose brother stole the network’s secret records before he was murdered. As a hurricane bears down and Plattman chases Annie’s team, they race to recover this vital cache before he can find and destroy it.

Dr. Katherine Ramsland teaches forensic psychology at DeSales University in Pennsylvania, where she is the Assistant Provost. She has appeared as an expert in criminal psychology on more than 200 crime documentaries and magazine shows, is an executive producer of Murder House Flip and consulted for shows like CSI, Bones, and The Alienist. The author of more than 1,500 articles and 69 books, including The Forensic Science of CSI, The Forensic Psychology of Criminal Minds, How to Catch a Killer, The Psychology of Death Investigations, and Confession of a Serial Killer: The Untold Story of Dennis Rader, The BTK Killer, she was co-executive producer for the Wolf Entertainment/A&E four-part documentary based on the years she spent talking with Rader. Ramsland consults on death investigations, pens a regular blog abut crime for Psychology Today, and is currently writing the Nut Cracker Investigation series. The first one, I Scream Man, was just published.

Katherine, this sounds terrific and I can't wait to read it. Wonderful to read books with such passion behind them,
Joyce.

Congratulations on your recent publication! Fascinating subject and I look forward to reading it.

I love psychological suspense. This sounds a little gruesome, but certainly worth a look.

I've downloaded your book and will start as soon as I finish this months' selection for my book club. Your passion certainly comes through in your writing and your presentations to writers' groups. Research is also my go-to inspiration source, and you're right, the subject/theme needs to make me itch to write.

Thanks, everyone, for reading my post and leaving comments.