A Nation of Shopkeepers by Susan Van Kirk 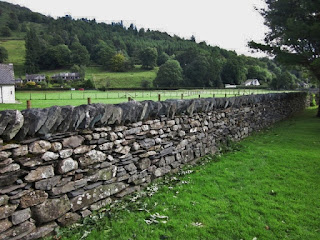 The title of this post is a phrase first attributed to Adam Smith in his economics book, The Wealth of Nations. The phrase was repeated in a derisive way by Napoleon to describe the United Kingdom: L’Agleterre es une nation de boutiquiers. Napoleon walked that back saying he simply meant the UK was a nation of commerce, the power that ran an Empire.

I mention this because I have a mystery in my own life dating back a few years to England and shopkeepers. I have still not solved it. So, here’s the story… 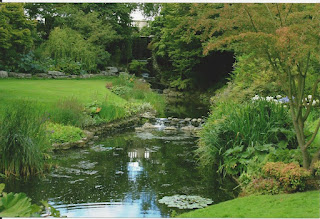 A few years ago, I was on a tour of England, Scotland, and Wales, sponsored by a bank in our small
town. During our drive through Cambria in the Lake District, we stopped at a shop in the small town of Grasmere. The shop was terribly busy since two tour buses were there together, and it was hectic buying souvenirs and gifts. But one of my friends found a necklace we both liked. Unfortunately, it was the last one. Undaunted, the shopkeeper said I could pay him for the necklace, and he would ship it to me. Since I loved the necklace, and the shopkeeper seemed like an honest, helpful man, I agreed. Just call me gullible.

This is where I should describe this trinket which cost 54£ ($86.48 at the time.) It was made of a sixpence, a coin with a long history of good luck and tradition. On one side it has a black background with the cameo of Queen Elizabeth II, (a woman whose coronation I watched on television back in 1952 when I was six.) The sixpence (six pennies) was legal tender in the UK until June 30, 1980. 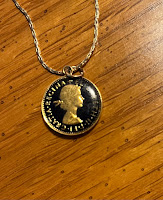 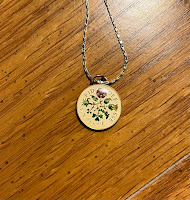 On the back side are the symbols of the countries of the UK: a thistle for Scotland, a garland with a rose for England, a shamrock for Northern Ireland, and a leek for Wales (a daffodil in Wales is known as “Peter’s leek.”) Also on the back is FI DEF which is Latin (fidei desfensor) for Defender of the Faith.

A sixpence is heavy on tradition, especially wedding superstitions. It used to be lucky to find a sixpence in the Christmas pudding if you were a little kid. A silver sixpence was put in a bride’s shoe by her father, wishing her prosperity, love, and happiness. The aircrews of the Royal Air Force sewed a sixpence behind their wings or brevets, a custom for luck beginning in WWII. So, this sixpence has quite a history, and since I love history, it was the perfect necklace for me.

The long and short of it: I paid for the necklace, signed a mailing label with my address, and went on my way, figuring I would see the necklace in a few weeks.

I waited, and waited, and waited. It never came. I was quite upset to think I had been taken advantage of, and I was just as naïve and trusting as the protagonist in my Endurance mysteries, Grace Kimball. I wrote it off as a lesson learned and felt sure I would never see my necklace.

Here is where the mystery comes in.

My long-awaited necklace came in the mail…ten months later. It looked like it had been through hell. The mailing pouch was totally crushed, and when I opened it, the box that contained the necklace was twisted into four parts and a hinge, all lying in the pouch. The paper saying, “With Compliments,” was ripped into several pieces.

But my necklace came through unscathed—a truly lucky sixpence.

Where had this necklace been all that time? Had it been caught in some demonic machine owned by the US Postal Service? The label was perfectly readable, so if someone found it, they were able to get it to me. I spoke to a supervisor at our local post office, and she noted the lack of bar code on the package. Now, the USPO bar codes everything, but at that time it wasn’t the case. She felt a package this small would not have been put through a machine. In all likelihood, it was left in someone’s mail pouch, recently found, and sent on its way. Could have been in the UK or in the USA. Because the box was all twisted, it might have been in a very warm place at some point, explaining its condition.

A mystery for the mystery writer. A piece of truth—the phrase should have read, “A nation of honest shopkeepers.”

A fine tale, Susan about which I have no speculations to add.

What? Jim without a solution? Such a mystery from such a stunningly beautiful place. I think if God were looking for a home, He’d pick the Lake District.

Great story! I wish I could tell you my wedding sixpence was carefully stashed away for my daughter's wedding, but she ordered her six pence from Amazon.

Glad you got it.

Before Amazon bought Goodreads & starting charging for their book giveaways, I used to occasionally offer a book.

I would include many countries, even though I knew the mailing could be outrageous. But I figured how else would one of my books ever get any attention from people in far-flung places.

One time, the winner was in Australia. I forget how much the postage was, but it was pretty steep. I sent it. A few months later, I heard from Goodreads that the winner had complained that the book had never been received.

I had the receipt, but the point of the whole giveaway is to end up with a happy winner, so I sent another one.

The winner wrote back that the book had eventually been delivered. In fact, both shipments were delivered at the same time.

Well, at least you had good intentions, Margaret. I find that a very endearing tradition.

Kathleen, I don't understand the mysteries of shipping things overseas. You went out of your way to make that situation right. I, too, have shipped books to winners in Canada and the UK, but not as far as Australia. That takes forever just to fly there, let alone get a book there!

Wonderful story, Susan. I read it over breakfast so I was glad for the happy ending.

Great story! I’m glad you got it. Do you still have it?

Thanks, Molly. I would never ruin your breakfast.
Yes, Teresa, I have it and wear it often.

I love this story! And that beautiful necklace. All I can think is that the tiny box ended up in wedged a dark corner of some cargo hold, waiting all this time for someone with sharp eyes to notice it.
I have a similar story but without the happy resolution. I saw a darling stick pony in the window of a toy shop in Saratoga Springs, NY, perfect for my then 5 year old. They didn't have one, so I paid to have one shipped to our home in VA. Said 5 year old is now a college graduate and we moved at least six times, so if that horse shows up it will be a miracle!

So you have a mystery too, Shari!!

It's a great story, but I was really hoping for a dead body.

I love your story -- and I have the same necklace! My husband bought it for me many years ago when he was in England for work. Until I read your post, I never knew about the lucky sixpence traditions or the meaning of the symbols on the colorful side of the coin.