Mystery in the Midlands

On Saturday, July 28, 2018, in the “famously hot” city of Columbia, S.C., the Palmetto Chapter of Sisters in Crime and the South East Chapter of the Mystery Writers of America (SEMWA) presented the inaugural Mystery in the Midlands conference (so named because Columbia is at the state’s center, halfway between the Low Country and the Upstate, in an area often designated as “the Midlands”). Since last summer's highly successful SEMWA sponsored Jeffery Deaver program, our two organizations had discussed having another event in Columbia. When Sisters in Crime National paid for Elaine Viets to come to Columbia as part of its Speakers’ Bureau program (many thanks for this terrific program!), we knew we had a fantastic guest of honor and set to building a mystery book festival around her appearance. 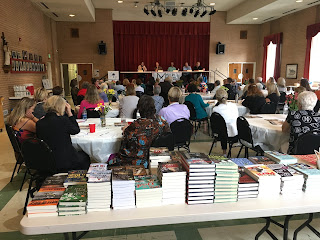 residents Riley Miller (Palmetto Chapter) and Maggie Toussaint (SEMWA) headed our planning committee, which included Carla Damron, Maxine Henry, Debra H. Goldstein, Lynn Chandler Willis, and myself as liaison and event coordinator for each group. We sent out a call to SinC chapters and SEMWA members in the region, asking who might want to participate in a day of master classes and panels. We were delighted by the overwhelming response. In addition to Elaine Viets, 20 authors served on 4 panels and 3 authors taught master classes.
﻿﻿﻿﻿
We began the morning with Krispy Kremes and caffeine. (By the end of the day, our excellent assistant Billy Itter, a talented cartoonist, told me he now understood that authors were fueled by regular, not decaffeinated, coffee.) The first presentations of the day were the three master classes featuring Jaden (Beth) Terrell (“Don’t Sweat It. Get It Done!”), Debra H. Goldstein (“Turning Up the Heat with Conflict”), and Richard Helms (“The Brains Behind the Words”). All these classes were well attended and the only complaint I heard was that folks wanted to be in all three at the same time. Our gracious presenters have agreed that we may post their materials on our website. YAY!﻿﻿﻿﻿


Following the master classes, our first panel had Lynn Chandler Willis moderating “Getting Real with Crime Fiction” with Lynn Hesse, Brian Thiem, Roger Johns, and Paul A. Barra. Then, we had a lively interview of Elaine Viets by Cathy Pickens. What amazing experiences Elaine has had in conducting research for her novels and short stories! She thrilled us throughout the day with tidbits of what she had discovered about hotel maids, bookstore employees, and male strippers!


During a buffet lunch, Riley Miller presented a super “Hot Leads” introduction of authors. Each table had a composite of author “mug shots.” Riley told the audience an unknown fact about each author in the composite group. The person who guessed the author won a center piece (each beautifully designed by Donna Robison), then the author had a few minutes to tell the audience about his or her work.


After lunch, we continued with “Hot Shorts: The Art of the Short Story.” I was delighted to moderate for Robert Mangeot, Warren Moore, Karen McCullough, Claire Count, and Elaine Viets. I’ll have to brag a little. Robert Mangeot got an acceptance from an editor during our panel discussion! Another YAY!


The final panels were “Characters That Sizzle on the Page,” a lively consideration with Riley Miller moderating Maggie Toussaint, Stacy Allen, and Reagan Teller, and “Turning Up The Heat: Defining Genres,” a great round up moderated by Sally Handley with Leslie Conner, JR Ripley aka Marie Celine, Kathleen Delaney, and Sharon Marchisello.


As you can see, the “famously hot” theme dominated, but the heat remained outside and on the page. Inside, we had to turn up the thermostat because the air conditioning became a little cold! Thank you to St. Paul’s Evangelical Lutheran Church (my home church) for letting us use the facilities!


Our bookseller was Books on Broad from Camden, S.C. Thank you, Kim McCathern, for all you did to ensure you had the authors’ books or could offer them by consignment!


Special thanks to Billy Itter (who took care of us throughout the day), Dean Long (who managed audio), Della Carmichael (who provided assistance and materials from the Columbia Visitors’ Bureau), and Krista Merle Anderson (who created our logo). So many Palmetto Chapter and SEMWA members (and their spouses) worked diligently behind the scenes to make the event a true success. Many thanks to them all!


We also had a silent auction, to which many of our authors contributed books. Elaine Viets graciously offered a 20 page critique. Special kudos to Marie Waller, Susan Husman, and Michelle McGee for helping to create and transport the baskets.


The proceeds from the auction (totaling $468) will benefit the My First Books SC -- Midlands program, a statewide partnership led by the Palmetto Project and affiliated with Dolly Parton’s Imagination Library. It provides books for any registered child from birth to age five.


﻿﻿﻿﻿﻿﻿Seventy-eight people registered for Mystery in the Midlands this year and almost all attended. We were delighted with the participation and look forward to continuing the new 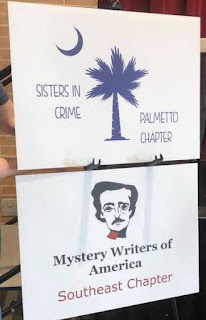 
Won’t you come to Columbia for next year’s Mystery in the Midlands?

It was a fabulous day, and I so enjoyed participating. So many wonderful authors, and a room full of enthusiastic readers! Elaine Biets was so funny and I really enjoyed the interview with her. Loved the Master Classes and I was one of the ones who wanted to be at all three at once! Looking forward to 2019!

Sounds like a wonderful event! I wish I could come next year.

love the co-sponsorship between SinC and MWA. What a great event!

It was a terrific event and made me proud to be a member of the Palmetto Chapter of SinC. Elaine Viets is a marvelous speaker and her fabulous sense of humor coupled with interviewer and author Cathy Pickens dry wit kept everyone in stitches while they received valuable information about the world of the author.

The atmosphere was electric, something that happens in a good conference. I, for one, can't wait until next year's edition!

Thank you Stacy, Kathleen, Margaret, Sasscer, and Warren for your kind comments. Sasscer, I had the same sense that you did, of encouragement and excitement about writing. It was a terrific experience.

Congratulations, Paula, on holding what sounded like an absolutely terrific program. And thank you for writing about it. I've always gotten something from every writing-related program I've attended. I wish Columbia, SC, was a little closer.

Paula and Riley Miller (and committee) pulled together a wonderful conference. It went so smoothly and was so much fun, no one would ever have known it was a first tome event. Kudos to them and for SinC and SEMWA putting its finest efforts together to use the SinC educational grant which brought in Elaine Viets to be expanded to benefit so many

Looks like such a great time! Sorry I missed but hope to make it next year! Thanks for the recap. :-)

What a well-run conference. I was another writer who wanted to be at all three master classes. Lots of useful information from the panels.

WOW, this sounds like a not to be missed conference. Hope to make it next year. Thanks for sharing, Paula!

Thank you for sharing the event with us. Love the venue for Debra's talk. It's no mean feat to pull off a conference like that. Congratulations to all the participants!

It was a wonderful experience. So many people gave 110% to pull this off, including our Paula Gail Benson. After working like crazy on the 2017 event, I took the easy path and helped with graphics and publicity ideas. I'm so glad this festival has legs and will be on track for next year. SEMWA is delighted to have been a part of this event and we thank our gracious SinC Palmetto Chapter for letting us be a part of it.

Paula, what a great time everyone seemed to have had. I'd love to go next year, but I'm afraid it's too far away for me to drive.

Grace, thank you, I wish you could be with us.

Debra, you were a big part of the planning and your master class on conflict was much appreciated.

Art, we'd love to have you!

Elaine, you were a fabulous guest of honor!

Kait, we'd love to have you join us!

Maggie, your contributions were very valuable. Thank you for continuing to be such an important part of this team!

Gloria, we would love to have you. Hope to see you at next year's Malice!

What a wonderful, well-run event. I too wanted to hear the other two Master classes! But the panels were all fascinating, and Elaine is an entertaining and inspiring speaker.