Books Worth Re-reading by Mary Feliz

What makes me drop everything and read? Fine writing. Clever plotting. Compelling characters. Intriguing settings. And, most of all, original combinations of all of the above.

The following is a list of some of my favorites. If I tried to create a similar list tomorrow, different books might be on it. But in creating the list I discovered something that had previously escaped me: I like books with a hopeful perspective and diverse characters.

So it should be no surprise that in my own books, I’ve recreated elements of the stories I love best—those with intelligent but flawed characters who value truth and justice. My story people aim to treat other people well, but sometimes fall short. They find their own strength when they remember they can’t do it all and they succeed only when they relinquish control and remember to value the contributions of others.

Its plot has become a cliché, but when I first read it, it was new to me and novel. Like Anne of Green Gables, Betsy is an odd child who comes to understand and treasure herself at the same time she’s struggling to be appreciated by those around her. It’s a story retold in everything from fairy tales to Harry Potter. I’ve loaned my copy to adolescents for years, but it’s one book I always insist they return.

Chitty-Chitty-Bang-Bang, Ian Fleming
Reading this book pops me right back onto the carpet in front of the fire in my childhood living room, listening to my father draw out the cliffhangers in delightfully painful fashion. It’s an episodic thriller, but it’s also the story of a family working together to solve problems, respecting the contributions of each family member. The movie was a mess, but the book is a treasure. 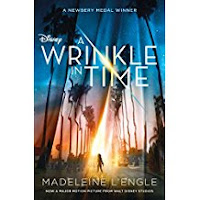 A Wrinkle in Time, Madeleine L’Engle
I fell in love with the Murry family, their kitchen, and Mrs. Murry’s laboratory and immediately searched for additional installments in the series. Each story person is complex and layered with positive and negative qualities. There are no easy answers to the struggles of the young people, but surrendering to the scary power of honesty and love moves them closer to their goals.

The Moonstone, Wilkie Collins
Considered first detective novel, this Victorian romp is multi-layered with subtle humor and a sleuth
determined to bring the guilty to justice. The story gives voice to those who weren’t always heard within the strict confines of 19th century class strucure. The mystery is revealed by eleven narrators, each with a unique voice and viewpoint.

The Black Echo, Michael Connelly
Vietnam Veteran, Tunnel Rat, and Los Angeles Detective Harry Bosch is a flawed man who breaks the rules and defies authority in pursuit of the truth, determined to uphold his code: “Everyone counts or no one counts.”

Still Life, Louise Penny
Like Bosch, Chief Inspector Armand Gamache is a man with a code, determined to teach his subordinates to wield four sentences taught to him by his own mentor: I was wrong, I'm sorry, I don't know, and I need help. Though Gamache himself sometimes struggles with those concepts, the detective and the books are hopeful, holding white-knuckled to the belief that love always wins in the end.

The Cold Moon, Jeffrey Deaver
Lincoln Rhyme is abrasive, impatient, and intolerant. He resolves every case with cold hard evidence. To solve one of his most difficult cases, Lincoln, who mistrusts all witness testimony, must join forces with Kathryn Dance of the California Bureau of Investigation who eschews easily tainted forensic details and relies on witness micro-expressions to solve crimes. Kathryn and Lincoln are two sides of the same demanding coin, but that makes it difficult for either one to appreciate the other’s perspective. But unless they join forces, they’ll never bring down the Watchmaker.

What books, movies, or television shows do you turn to again and again, like renewing an old friendship or indulging in comfort food?

Mary Feliz writes the Maggie McDonald Mysteries featuring a Silicon Valley professional organizer and her sidekick golden retriever. She's worked for Fortune 500 firms and mom and pop enterprises, competed in whale boat races and done synchronized swimming. She attends organizing conferences in her character's stead, but Maggie's skills leave her in the dust. Address to Die For, the first book in the series, was named a Best Book of 2017 by Kirkus Reviews. All of her books have spent time on the Amazon best seller list. The fourth book, Disorderly Conduct, releases July 10, 2018. http://a.co/2T1QjVV
Posted by E. B. Davis at 12:00 AM

I keep my collection of Clare Fergusson/Russ Van Alstyne novels by Julia Spencer-Fleming and my collection of Longmire mysteries (the books) by Craig Johnson within easy reach of my desk for those moments when the words are stuck just so I can grab one and delve into some beautiful language and fabulous storytelling.

Great list! My "housebound with a head cold" list of re-reads includes books by Julia Spencer-Fleming, Ann Cleeves (Vera and Jimmy Perez), and Martin Walker (Inspector Bruno), with vintage copies of Up the Down Staircase and 84, Charing Cross Road.

Anything by Josephine Tay, Letter from Home by Carolyn Hart Instance of a Fingerpost by Iain Pears are on my list

Mary, it's so fun that we have many of the same favorites - especially The Moonstone, which has some hilarious parts. My comfort reads are the Mrs. Pollifax books and several children's favorites, especially Miss Rumphius.

Ooh! These are all good ones! I love Josephine Tey, Miss Rumphius, Julia Spencer Fleming, Mrs Polifax, and will have to investigate some of the others you’ve mentioned!

Every couple of years I reread Rafe, by Weldon Hill.

Fabulous list! And wonderful to read everyone else's lists, too. Margaret Maron's Deborah Knott series tops mine - Julia Spencer-Fleming was a new to me author last year (head hung in shame) and her books are on my TBR and comfort read list. An oddball one - Stephen King's On Writing. It always gives me energy.

Fun post, Mary. I've read a number of books over and over b/c of my teaching career. In spite of reading them many, many times I never tired of the tight, brilliant construction of Of Mice and Men and The Great Gatsby.

I hadn't read all of the books, but I still recognized most of then from other sources. I'd forgotten about the Chitty Chitty one, until I saw it here This brought back memories. My favorite book on this list was the Black Echo with lead Harry Bosch. Thank you