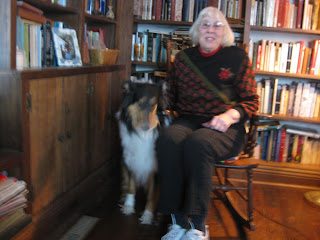 I first wrote this blog in 2012. Recently my computer got two viruses so I was without a computer for almost a week, and since I only got it back and didn’t have time to write a new blog I decided I’d use this one again because I doubt that anyone would remember it anyway. So the authors I used in the first paragraph are none of the later mystery series I became hooked on, although I’m still reading Amanda Flowers many series and the latest has a cat in it, too.

Cats are prolific in cozies, and if it’s not a cat, there’s often a dog. Sometimes there are even both, or some other animal. In Amanda Flowers latest series there’s a potbelly pig. Maybe Carolyn Hart started the cat craze in cozies. I’m not sure, but I know it was years ago when I started reading her books. Her character, Annie Darling had a cat named Agatha in her mystery bookstore series. Amanda Flower’s character India Hayes has a cat in one of her series. Lorna Barrett’s character, Tricia, has a cat in her Book own series, while Krista Davis’s character, Sophia, has both a cat and a dog in her Diva mysteries, and then there were the Cat Who . . . series. I’ll admit I tired of them after a while. There are only so many times I could read about a cat licking its private parts. I didn’t think the plots were strong enough to endure that.
Although pets aren’t just in cozies by any means, they are more likely to appear there. Maybe it’s because readers of this genre are looking for something a little less threatening than a police procedural or thriller. And maybe it’s because writers of this genre have cats or dogs. I know most if not all of the authors I mentioned have cats, dogs, or both. In my opinion, there are several reasons why authors include animals in their books

One: Writing is a solitary life. The writer needs to isolate themselves as much as possible to wrote, and unless the writer has another job with social interactions, or an active family living with them. It could be a lonely life. A pet can alleviate some of that loneliness. Enter the cat or dog. They’re a companion, and they sleep a lot giving writers their needed solitude. Over the years following the Guppies list serve among the writers who posted there, cats seemed to be the most popular pet. Perhaps it’s because cats don’t need to be taken out for walk. Also having cats or dogs a writer can write realistically about the animals’ behaviors.

Two: Pets humanize the protagonist, show a tender side to them, and because both cats and dogs are popular pets, many readers can relate to them. Of course, children can soften a protagonist, too, but children create problems. It’s hard for a sleuth, especially an amateur sleuth, to take of sleuthing on a whim when they have children to consider. Not that it’s impossible, but it’s much easier to leave a cat or dog at home than a child.

In my series, my protagonist, Catherine, has a cat. Eventually she ends up with a dog, too. Her romantic interest, the police chief, who she is now engaged to, had a cat and at the end of the first book, he acquired a dog from the death of a murder victim. 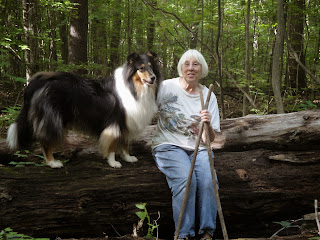 Do you include cats or dogs in your work?
Do you have a cat or dog?

Email ThisBlogThis!Share to TwitterShare to FacebookShare to Pinterest
Labels: cats & dogs in books

I have two standard poodles stretched out on the cool tile kitchen floor next to me. Yes, I write about them.

Margaret, I've only seen one or two standard poodles before and they were beautiful.

Wonderful blog. I do remember it from 2012. Loved it then and it has aged well.

I currently have cats, but I have also been a dog owner. Both show up regularly in my writing.

Mysteries and mystery bookstores are common haunts for cats

Thank you, Shari. In addition to my tabby house cat, I also have two barn cats. I've always had
at least one cat or more. After I started teaching I was without a dog until I was almost ready to retire. I didn't think it was fair to have a dog when I was gone all day and sometimes into the evening when I had a parent teacher conference.

Warren, it's a rare bookstore, at least an independent one that doesn't have a cat.

I love "The Cat in the Stacks" series about a librarian and his large Maine Coon who goes to work with him. My ONLY "pet peeve" LOLOL is the cover shoes a large cat but it is NOT a Maine Coon. grrrr. Delightful stories with a friendly cat. -- Laurie

Laurie, I haven't read that series. You'll have to tell me who the author is.

We've been trying to cut down on pets as we get older. Right now we're down to one dog and five cats.

I include cats and dogs in much of my writing. My recent story in the anthology Fur, Feathers and Felonies was told from the point of view of Rasputin, a black Russian terrier mix with a heart of gold, who doesn't think ill of anyone, even when they are kidnapping his master.

Kathleen, that sounds like a cool story. Who put that anthology out?