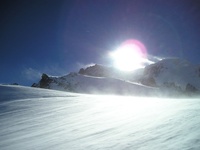 Image from http://pixabay.com
Note: This seems like a good date for my blog
Some years ago a military training exercise for new recruits in the Alps seemed destined for disaster. Weather conditions deteriorated in a sudden and unexpected way. A severe blizzard was predicted to last a week. The veteran sergeant who had been in charge of the group broke his leg. A helicopter crew risked increasing winds and turbulence to reach and evacuated him. There was no way to bring the recruits in or to get experienced solders to them before the storm hit.
The blizzard raged for ten days. Search groups expecting to recover the bodies of the recruits found them together moving toward a pass that would lead them off the mountains. One of the men found a map in his pack. Together they worked out where they were on the map and where they could look for a way down the mountain. They stayed together and cooperated, sharing what food they had and sheltering in a cave for the worst of the storm. Then they had a common goal and set out with determination to achieve it.
Later one of the rescuers examined the map. He found it was a map of the Pyrenees, a different mountain range entirely.
The men had no leader, no accurate idea when or even if rescuers might find them and the map they were following could not possibly lead them to safety. But they had the three basic components that make up hope.
First, they believed that they would succeed. Second, they had a specific goal, i.e., to get down the mountain safely. Third, they knew the path they took would lead them to their desired outcome, which it did, although in an unexpected way. They saw themselves as young, healthy and determined. They used what little training they had. Rather than focusing on the obstacles they faced, worrying about the consequences of failure or lamenting about what they did not have, they had the mindset, the will and the determination to press ahead.
You might ask: How does that apply to me? I am not stuck on a mountaintop in a blizzard. I am slogging through a tough time.
The principles are the same. You can explore the options you have. You can remember and appreciate what is going well in your life. You can remember other difficult patches and what helped you then. Maybe some of what was helpful before would work for you now.
Who is a positive influence on your life? Can you get with that person not to complain but to experience happiness and to tap into the energy you feel when you are together?
What are you passionate about in terms of making the world a better place? If you get outside the room in your head that is occupied by problems and into a place where you are doing something for a cause greater than yourself, you will feel better. You can get better perspective about your problems versus the world’s problems. You can plant a seed, knowing you will not see it come to full flower, but knowing that people in the future will be able to build from your efforts.
Write, dance, sing, paint or create through whatever way works for you.
“No hope?
Look up into the stars
Or down into a baby’s face
And tell me there is no hope…”
— Ann Weems

Beautiful and timely message, Warren. Thanks.

Thanks, Warren, I needed to read this today.

Thank you for this positive blog and message. We all need hope in our lives.
I always loved Emily Dickinson's poem "Hope is the thing with feathers."
It does soar.

Wonderful story and application, Warren. Those are the messages everyone needs to read.

Such a timely message, Warren! Thank you!

What a great blog! I remember reading the story someplace, Warren. Always inspirational.

A great message, and timely. Thanks.

A reminder that sometimes out reality is what we make it.

A wonderful blog, Warren. I've certainly had problems in my life, but in time things got better,
and in the overall time of my life, life has been good to me. Mostly, I don't let things that go wrong keep me from still having a positive view of my life and how lucky I've been over the years compared to so many other people.

Good story and even better message, Warren. I'm always inspired when I read about people coming together and working for a common goal in tough times.