The Killing Kind by Chris Holm: A Review by Warren Bull 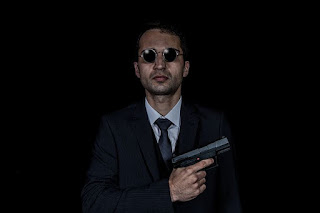 Author Chris Holm presents an interesting premise in The Killing Kind. Michael Hendricks is an assassin for hire. He is a hit man who only kills other hit men. The novel won the Anthony Award and was nominated for several other awards. No surprise it is well worth reading.
Trained in “black ops,” left cynical by the secret missions he participated in, and presumed dead after a disastrous military expedition, Hendricks ghosts in and out of jobs leaving no trace behind.  He will only take jobs when the person whose life is threatened is someone he believes is worth saving and when that person can meet his price. But too many unexplained deaths of the deadliest hit men in America have the FBI and the mafia both searching for him.
His self-loathing and risk-taking are not as dangerous to him as the few human ties that still exist in his stunted emotional life. Wounded and unarmed he must face his greatest opponent ever.
My highest recommendations.

Love both of his books and can’t wait for a third.

I was surprised to find this book was released in 2015. It has all the hallmarks of classic noir. Sounds great. Thanks for the introduction, Warren.