Ruminations of a Pantser by Annie Hogsett 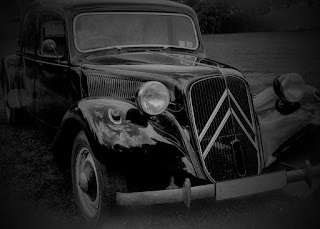 E.L. Doctorow said, “Writing a novel is like driving a car at night. You can see only as far as your headlights, but you can make the whole trip that way.”

I swear I see this quote at least once a year. It soothes my raggedy soul every time. Quiets the voice that plagues my writing hours. Well, technically, all my hours. The one that says, “You really don’t know where this is going, do you?” AKA “You really don’t know what you’re doing, do you?” Unsettling either way. There’s no point lying to that voice. It knows what I’m thinking. It is what I’m thinking.

The other thing this quote tells me is that E.L. Doctorow was a Pantser, i.e., he wrote by the seat of his pants. Us Pantsers are all driving home more or less down the same dark road. In an uncontrolled manner that would probably get us pulled over by officers of the law.

People who don’t write, or writers who don’t write this way—the “Plotters,” whom I admire, envy, and sort of pity, all at the same time—no doubt regard seat-of-the pants writing as horrifying. The mark of an undisciplined mind. Perhaps an unstable mind. I’ve seen how people look at the person who claims Pantserhood.

Here’s an example: Readers occasionally ask me how come I made Tom Bennington, the co-protagonist of my mystery series, blind. The simple truth is, “I didn’t make Tom blind. He was blind when I got him.” I can tell by their expressions that they find this pretty…odd.

Odd but true. My entire series was sparked by a scene that unfolded in front of me on the street one morning. Some thoughtless person beeped—in a careless, “C’mon, hustle-up” way—at a blind man crossing the street. And I said to myself, “’Wow. You know you live in a rough neighborhood when somebody honks at a blind man in the crosswalk.”

Fifteen minutes later I was home at my desk. Asking myself—or Whomever-or-Whatever watches over a writer of mysteries who doesn’t have a clue, a crime, or a protagonist—Who said that?”

At that moment all I had was a blind man frozen in a crosswalk in a—let’s just say, unruly—part of Cleveland and a woman’s voice. Over the next four or five hours, Allie Harper told me her name and that she was lonely and broke. She also said this particular blind man was the great, smart—also handsome and hot—guy she’d been waiting forever to meet, and it made absolutely no difference to her that he was blind.

Then I realized, as we went along in the first chapter on that first day, that the winning $550 million MondoMegaJackpot ticket in Tom Bennington’s grocery bag—the one he bought to prove to a kid that gambling doesn’t pay—would provide the motive, means, and opportunity for murder and mayhem in my story. It was the best writing day for me. Magical. Mystical. Hair-raising. Fun.

Too bad it’s not always like that. Writing happens many different ways. Sometimes it’s ugly and slow. Sometimes nobody shows up. Or they speak only in stupidities. Sometimes at the end of the day I roll down my Pantser-car window and fling a few pages back into the night.

As I progress to the third book in my series and deadlines are more inexorable, I notice I’m exploring the “Plotter Dark Side.” Maybe there’s a hybrid for my road trips. Maybe it would be more…economical. So every now and then I give the possibility a test drive. I have always written a final scene for whatever story I’m working on, usually in the first couple of weeks. I don’t have a map, but I have a destination. It beckons to me, like my mother’s phone calls used to, “When will you get here? Where are you now?” I experiment with lists. I make more notes. I had a flirtation with 3x5 cards. (Nonstarter.) I listen to my characters and if they give me clues, I write them down.

For the record, I’m painfully aware the road E.L. Doctorow was driving down was a better quality road than mine. I read Ragtime and I’ve listened to him talk. Also, Doctorow’s literary car was equipped with strong batteries and excellent headlights. I’ve got the penlight they give out for free as swag at conferences. Good to have, but it’s not going to show me the way to Ragtime. I imagine, though, that E.L Doctorow, Pantser Extraordinaire, occasionally discarded a couple pages of a story on the road behind his car.

I bet he looked back for a moment, until the darkness swallowed them. Then drove on.

Readers: Are you a Pantser? A Plotter? Or a Pantser/Plotter Hybrid? How come? 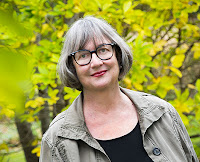 Annie Hogsett has a master’s degree in English literature and spent her first career writing advertising copy—a combination which, in Annie’s opinion, qualifies her for making a bunch of stuff up. Her first published novel, Too Lucky to Live, #1 of her “Somebody’s Bound to Wind Up Dead Mysteries,” was released by Poisoned Pen Press in May 2017. Second in her series, Murder to the Metal, is out now! Annie lives ten yards from Lake Erie in the City of Cleveland with her husband, Bill, and their delinquent cat, Cujo. She has never won a 550-million-dollar lottery jackpot.

“Murder. Mayhem. Romance. Cleveland.” Last summer an accidental MondoMegaJackpot stirred up major murder and mayhem for Allie Harper and Tom Bennington. This summer? Nothing’s changed. Sure, Allie and Tom now reside in a 9,000-square-foot lakeside mansion with a sky-lit shower and breathtakingly high-thread-count sheets. Yes, Otis Johnson is now their live-in bodyguard and gourmet chef. True, Allie’s dream of a T&A Detective Agency to solve “mysteries of the heart,” using Tom’s money, Otis’ P.I. credentials, and Allie’s intrepid…intrepidness now has its first case. That’s where the real trouble kicks in: Allie and Tom are in a high-speed race against danger and death. Again. It’s Murder to the Metal.

I'm still a pantser, though I "pants" the plot using freewriting before I make a fluid outline and start writing. I will never equal Deaver's elaborate outlines with links to his research notes.

Lately, after writing the first draft of a story, I find myself making a three point turn on a one lane road and approaching the same story from a different direction. One headlight out.

I'm enjoying your book about Cleveland, where we used to live. Now it's Cincinnati.

We all have different methods. I've tried writing an outline but when I finish the outline I feel like I've written the book. I do use a timeline.

Annie, I'm like you. Mostly making it up with a couple stops at "must see attractions" along the way. I tried an outline on a couple of occasions. I always wound up throwing it out halfway through the first draft.

I thought I was a pantser who wanted to be a plotter, but I read a blog that said some people are puzzlers - those who take scenes and fit them together like puzzle pieces. That may be me! I'm still figuring it out.
Your book sounds like so much fun - definitely on my TBR for this summer. Thank you for stopping by today!

Shari, that may be what I am, a Puzzler. A very pantsy Puzzler. Which is why Scrivener works for me as a word processing tool. I can write the scenes in any order I want -- like Annie, I usually write the end first, then use that like a North Star -- and eventually I take all seventy or eighty or so scenes and put them in order and make chapters out of them. I wish I was a better plotter, I do. But this process jalopy hasn't let me down yet.

Thanks for a great post, Annie -- we are so happy to have you here at Writers Who Kill.

I seem to change my technique a little with each new book. I tried being a complete pantser once and swore NEVER AGAIN. Too much rewriting after I reached the end to make everything coherent. I've swayed back to my outline ever since, although it's not a very detailed one.

Love the way you took that headlight image and spun it out. I identify too with your line that Bennington was blind when yo got him. Thanks for a thoughtful piece that reassures me I'm not crazy. And because of this piece I've added you to my TBR list. Happy Saturday to you.

This is my first time seeing this website and I'm hooked--it's already on my favorites bar.
I thought it was interesting how you used E.L. Doctorow's quote comparing writing to driving a car in the dark. You see, I'm a pantser/plotter hybrid. I write the first six chapters or so, letting them flow then I quasi-plot using what I call a MAP! Like you, I have my destination before I write the story. The map shows me the way. I can detour, or I can follow it. The map doesn't show scenes, it describes mystery, suspense, and intrigue of each scene plus the villain's plan, trust/distrust, red herring, etc--no actual scene (that's the fluid part) only that scene's purpose.

Such a fun way to describe writing! I understand the characters who spring fully formed into the mind. I have tried to change some of my characters--really, tried to convince them to be a bit different from the way they present themselves--but they are adamant that they are who they are, and all the planning on my part will not work if I try to impose my ideas on them.

Thank you to Writers Who Kill for inviting me in and introducing me to so many kind and generous writers. I see myself all over the place here. Like you all I have tried quite a few roads and I'm always tempted in to go in new a direction. Always hoping for "The Right Answer." I'm a puzzler. A lot. I loved Scrivener but could never quite trust it. I've flirted with outlining. I have a Fodder file where I throw any idea that appears. Characters who just show up and refuse to leave. Or show up and decline to stay. Sometime whole scenes and characters vanish. It's a rats nest but I get good rats there sometimes. Detours. MAPS! So, Judy, I assume you're entirely reassured you're not crazy. You're a writer. I tell myself this. I also tell myself, "Plotters plot but Pantsers pay." Sooner or later it all has to fit. But I almost always enjoy the ride. Thank you all, this is very fun.

I’ve tried being something other than a pantser and it doesn’t work. I concentrate my efforts at becoming more efficient working from the first draft to the final draft. It's getting better but I have improvements to go!

Hi, Jim. I've felt very welcome. Great to hear from you. Yeah. I can tell I'm better at some things and incorrigible about others. It's such an outrageous enterprise. Sometimes I feel competent. Sometimes I don't. I just love to be surprised by my characters.