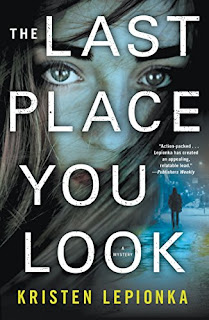 
Lepionka ably establishes the setting in her hometown of Columbus, Ohio:


"I walked to the patisserie on Oak Street for breakfast and drank a cup of tea and ordered the white African sweet potato tart, which was not a breakfast food, so I got it to go in a little paper box in order to pretend it was for later. The neighborhood was caught in midgentrification right now, and though I approved of the introduction of exotic pastries, I hoped Olde Towne wasn’t going to get much nicer. I walked back home in the bright, cold morning air and tried to imagine who I might be appear to be: a rich lady buying a dessert tart for a Tuesday-night dinner party and checking items off a to-do list, instead of a slightly hungover detective inordinately proud of herself for being out and about before eleven o’clock and planning to eat half—no, most—of the dessert tart while driving.” (The Last Place You’ll Look, p.40)


Weary is hired to investigate a fifteen-year-old murder in the fictional suburb of Belmont, where the local police have their own way of dealing with persistent private investigators. She finds a body, though it’s not the one she seeks, and solves several other cases of missing young women as she risks her own life.


“Chief Jake Lassiter was not happy with me. I doubted there were any circumstances under which he would have been, but he was especially irritated with me now that I’d discovered human remains inside his town’s jurisdiction…I just stood there, arms folded across my chest against the chill in the air and, also, the chill in my blood—from the sight of the brown, brittle bones nestled in the folds of that blue tarp. The sparse strands of long, blond hair. My cases usually stuck to the problems of the living, to the trouble people make for each other. It seemed like a meaningless distinction, that I’d never seen anything quite so dead before, but I hadn’t, and I couldn’t stop thinking that.” (The Last Place You Look, p.136-7)


Weary shows the same dogged determination as Sue Grafton’s Kinsey Millhone, while she seeks enough evidence to exonerate a death row inmate. She is a complicated young woman, still grieving for her recently-deceased father and answering to her mother (baked ham, green beans, crescent rolls served at her command appearance family meal). Weary has the emotional support of her father’s former partner and one of her brothers.

In 2015, Kellye Garrett mentored Lepionka through Pitch Wars. She subsequently landed an agent and contract. Published in 2017, The Last Place You Look was nominated for 2018 Anthony and Macavity Awards. Lepionka’s second Roxane Weary book, What You Want to See, has just been released.


Readers and writers, who is your favorite female private investigator? 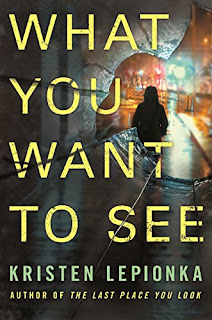 Interesting book, definitely on my TBR. My tastes lately run more to the amateur sleuth than to the female PI so I would have to vote for Kinsey Millhone as my favorite, but I'm open to expanding the field.

Congratulations on the release of your first book. My favorite females sleuth is Miss Marple.

Congratulations on your first book. It's on my TBO list. As for my favorite sleuth, I have read so many mysteries that it would be hard to pick a favorite. Last year I read 97 books and most of them were mysteries except for my book clubs' picks.

Warren and Gloria, this is Columbus-based Kristen Lepionka's Anthony and Macavity-nominated debut novel. Kait, I write about an amateur sleuth and enjoy reading female PI mysteries.

I am a fan of Sara Paretesky’s VI Warsharski and Nevada Barr’s Anna Pigeon.

Sorry for the late post, I was in full revision mode yesterday and when done shut off the computer!