Restaurateur Robbie Jordan is ready for the boost in business a local music festival brings to South Lick, Indiana, but the beloved event strikes a sour note when one of the musicians is murdered . . .

June’s annual Brown County Bluegrass Festival at the Bill Monroe Music Park in neighboring Beanblossom is always a hit for Robbie’s country store and café, Pans ‘N Pancakes. This year, Robbie is even more excited, because she’s launching a new bed and breakfast above her shop. A few festival musicians will be among Robbie’s first guests, along with her father, Roberto, and his wife, Maria. But the celebration is cut short when a performer is found choked to death by a banjo string. Now all the banjo players are featured in a different kind of lineup. To clear their names, Robbie must pair up with an unexpected partner to pick at the clues and find the plucky killer before he can conduct an encore performance . . .
https://www.amazon.com/dp/B0776H5T7B/ 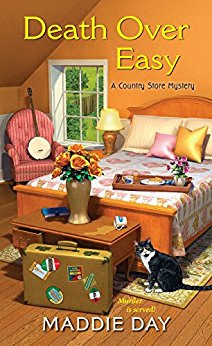 Death Over Easy is the fifth book in Maddie Day’s (Edith Maxwell) Country Store Mystery series. It will be released on July 31 by Kensington. I interviewed Edith when the first in the series, Flipped For Murder, came out in 2015, and I wanted to catch up with the series.

At the start, California native and chef Robbie Jordan visits her aunt in South Lick, Indiana, falls in love with the town, finds a building to buy, and founds Pan ‘N Pancakes, a breakfast and lunch restaurant in a country store, which also sells antique cookware. From there, the murders begin. It’s a great cozy premise: food, small town, repeat characters, a single woman and amateur sleuth.

Since Flipped For Murder, Robbie’s personal life, intriguing backstory and successful crime-solving keep readers coming back for more. In Death Over Easy, Robbie’s professional life expands by her opening a B & B on the upper floor of the restaurant/store building, which is a natural because she provides breakfast for half the town anyway.

Thanks for having me, E.B.  You always ask the best – and hardest – questions. Here goes!

What field did Robbie’s father, Roberto, do his graduate work in? What research did he do in South Lick?

He was studying the geology of the area, which includes a lot of limestone and natural mineral springs. He is from the Pisa area, which also has limestone and hot springs (the leaning tower is built on limestone in 1178). Both places are also hilly, so he would have felt at home in Brown County, Indiana.

The bluegrass festival was held at the Bill Monroe Music Park. Who was Bill Monroe? 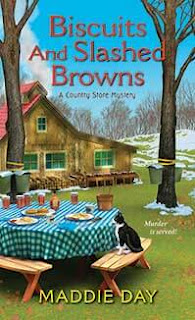 He was a well-known mandolin player from Kentucky (the Bluegrass State) who had a band in the 1930s called Bill Monroe and the Bluegrass Boys, so he pretty much named the genre.

Did bluegrass have its roots in Appalachia, Kentucky and Tennessee?

Yes, absolutely, with roots in traditional Scottish, Irish, and English music from the immigrants who settled there.

The victim, Pia Bianchi, borrowed money. What was it for?

It was for the graduate music program at Indiana University. She’s friends with Robbie’s friend Phil (see below), who also studies and works there.

A dancer, Beth Ferguson, and her fiddle-playing partner are staying at Robbie’s B & B. What makes Beth so disagreeable? Is she just cheap?

She’s unhappy and frustrated, and she takes it out on others, as many in that situation do.

This set of guests is Robbie’s first. What does she learn from them?

One thing she learns is that she needs a better key system, as well as an outdoor camera to track her guests coming and going. She also realizes B&B guests can complicate her life, but she can use the extra cash from renting the rooms, so she’s going to deal with it.

Must unincorporated towns in Indiana rely on the state police?

On them and on the county sheriffs. 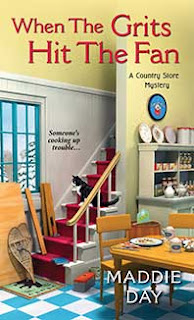 How does Robbie use crossword puzzles to help her solve crimes?

She sometimes mocks up a puzzle so she can see all the people and motives in one place and how they link. She has an orderly, visual mind and a good memory. Puzzling is a natural way for her to think.

IGA is a chain of independently owned and operated franchise grocery stores. When I lived in Indiana, we had IGA and Kroger’s. IPA is India Pale Ale, a style of highly hopped beer – and my personal favorite. Hops act as a preservative, and they were added to ale when it was being shipped from England to India in colonial days as a way to keep it fresh on the long voyage.

My store had been open for less than a year and it felt like I’d always been here.
I guess that’s a sign of being where you should be.
(Kindle Loc. 243)

Do you think there is a specific place where people belong?

I think people can feel deeply at home in certain places, sometimes inexplicably.

Yes! West Africans eat a form of thick corn porridge, too, as do Brazilians.

Robbie supplies the police with a lot of information. Isn’t she afraid people will stop talking to her? 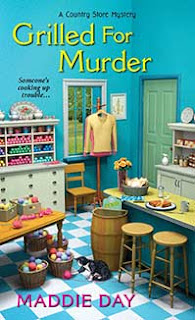 She doesn’t appear to be. People love her restaurant and so far nobody’s clammed up on her.

Who is Philostrate (Phil) MacDonald when he’s not baking for Robbie? How did he get his name?

It’s a name from Shakespeare’s Midsummer Night’s Dream, which Phil’s parents bestowed on him. He’s a graduate student in the IU Music department, and he’s also the part-time secretary there.

In the middle of dialogue, Robbie notices the foliage and sounds in the area. Does this slow the scene’s pace and put the reader in-the-moment?

We have cream pies, which are milk and sugar based, on the East coast. Is it that cinnamon on top that makes them pure Indiana?

I’d never eaten a sugar cream pie before I heard that it is a typical Hoosier dessert. I’ve had chocolate cream pies, of course.

Robbie bikes. Do you exercise, or is it something you wish you would do and give that attribute to your characters?

I do try to get vigorous exercise every day, usually power walking. I have been biking more lately, but not on her level – I hate riding up hills. Both my adult sons are serious cyclists, though, so I can consult with them on terminology and parts. 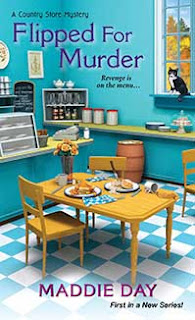 No, it isn’t wheat, as it isn’t a grass. It’s a different kind of plant grown for its grain-like seeds.

How has Robbie changed since the first book?

She’s become a better restaurateur, for one. She’s also growing confident in her relationship with her boyfriend, Abe, and is loving getting to know her father. In terms of solving crimes, she’s getting smarter about not venturing into dangerous situations alone. Nobody wants to be labeled Too Stupid to Live!

I hope readers will find me on my web site, at the Wickeds’ blog, and on Facebook (Maddie Day has her own page).  Thanks for stopping by!

Readers:  Where is your favorite B&B? What’s the best breakfast you’ve eaten out?

Always interesting to learn more about Edith /Maddie and especially about the newest Country Store Mystery.

Staying at a B&B is on my bucket list - The idea is wonderful, but I have never managed to put it into effect. The best breakfast ever? Any breakfast someone else has prepared! As much as I enjoy cooking, I dislike cooking breakfast - never can get it all done at the same time.

I'm not a B & B fan. I guess my privacy is important and socializing with strangers isn't a big priority, especially when traveling. Many cozies are set at B & Bs, which enable a continuing cast while bringing in new victims and perps. It also allows for great food bringing in the culinary aspect that readers often like. I usually don't eat a big breakfast, but when someone else is cooking--like Kait--I'm all for it!
Thanks for the interview, Edith.

I enjoyed your update on your Indiana series. We've stayed in great B&B's in Virginia, Mississippi, and Louisiana.

Thanks, everybody! I'd love to stay in a B&B in New Zealand. Total bucket list.

Kait, I don't know what a chess pie is.

I also love breakfast out, even though I rarely indulge. Crispy hash browns are almost impossible to achieve at home. And with an over-easy egg broken into them? Heaven.

Loved the interview. Good to get new insight. I don't have a favorite B&B - although I enjoyed one in Port Townsend, WA - where the Sound meets the Ocean. I also love Eggs Benedict when I eat out - but it has to be gluten free.

I have been to Port Townsend, Lori!

Edith (Maddie) is such a prolific writer! She is accurate with details and weaves everything into such satisfying stories.


I'm very fond of breakfast (really brunch) in the Circular Dining Room of the Hershey Hotel in (where else?) Hershey, PA. The hotel itself was built during the Depression, when Milton Hershey, shouldering a self-imposed responsibility to support the community, offered a construction job to one member of all families in need.

Thanks so much! I hope you get chocolate with that breakfast. ;^)

My husband and I were abandoned by our kids one year at Thanksgiving and gave ourselves a Texas Wine Country tour. We stayed at a B&B called Camp David in Fredericksburg and loved it there. They owners brought breakfast to the individual cabins, so there was no communal dining. I don't think they had a place for that. While we were there we watched them put up strings of twinkle lights so they'd be ready for the holidays. The breakfasts were...odd. I can't say they were good, but they were interesting.

My favorite breakfast is either Eggs Benedict or some form of pecan waffles. I don't make either of them myself, so that's another reason to like them.

Yay, for getting out another in this series! Congratulations!