I’m a great admirer of Charlaine Harris, Toni L.P. Kelner, and Dana Cameron, who all have seamlessly shifted between traditional mysteries and paranormal mysteries (as well as novels and short stories for each genre). I find it fascinating to delve into the worlds of creatures who coexist with humans, yet have their own infrastructure. 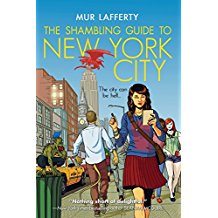 Maybe dipping back into mythology earlier this summer with Madeline Miller’s Song of Achilles and Circe was a good precursor for some paranormal reading. Also, I have to admit being intrigued when a work colleague read a recent short story I’d written and said it reminded her of Mur Lafferty’s The Shambling Guide to New York City (2013). My colleague was kind to share her copy and I found myself immersed in a familiar, yet very unique Big Apple.

Looking at the cover of the Shambling Guide gives you a flavor of what you’ll be encountering. It shows a young woman walking along a city street and passing by a man with a tail, a monster perched on the hood of a cab, and a skyscraper with a dragon at the uppermost tower. The book’s structure intersperses segments from a city guidebook with episodes in the young woman’s life.

Mur Lafferty’s protagonist, Zoe, shares some of the author’s own background. Mur, from Durham, NC, is both a podcaster (I Should Be Writing) and award winning and nominated science fiction writer. Zoe has left a great job in a Raleigh, NC, travel publishing company (after a horrendous affair with her boss) and is trying to re-establish herself in NYC. When Zoe sees a description of an editorial position that seems tailor-made for her, she wonders why the people involved with the company encourage her not to apply. Stubbornly, she submits a proposal and is given the opportunity, which means she’ll be writing a guidebook to New York aimed at “coterie,” or vampires, zombies, dragons, sprites, fairies, death goddesses, succubi and incubi, and similar creatures. The primary reason Zoe has been warned against applying for the position is that the office is staffed with vampires, zombies, and an incubus, who consider her food. Also, the new CR (Coterie Resources) employee is a “construct” (golem or created monster, like the one in Frankenstein) who has the head of one of Zoe’s ex-boyfriends. 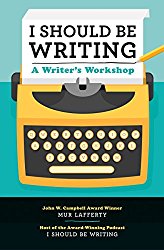 Zoe’s story begins as adventure, very much like Alice slipping down the rabbit hole, but it quickly becomes a thriller where Zoe, with her blunt approach to all things coterie, has to save the city itself from a rogue “zoetist” (a person who gives life to inanimate objects, like Dr. Frankenstein). In explaining zoetists and their constructs, Mur brings many different folklore traditions to the narrative, meshing them together in a manner that is both believable and informative.

At first, I wondered if the excerpts from the guidebook would be distracting from Zoe’s story. Instead, I found they enhanced and broadened it, introducing background in a manner that did not intrude upon and sometimes foreshadowed the action. Reading the Amazon reader comments, I noticed one person expressed a desire for the entire guidebook. Another commenter suggested that Mur’s book was about tolerance. I agree. The characters in the book all had many fundamental differences, but found ways to work together for the greater good. 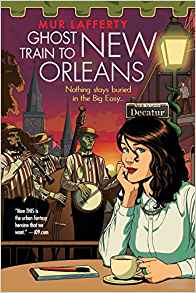 I have to admit I've ordered the second book in the series, Ghost Train to New Orleans (2014), maybe as much from hearing about Shari Randall’s journey there as well as anticipating what Zoe and her staff will encounter as they write a supernatural tour guide for the Big Easy. The vicarious travel to both the cities and the paranormal world makes for some delightful vacation reading.

What fictional trips have you taken lately?
Posted by Paula Gail Benson at 12:00 AM

If someone asks me, I will respond that I don't read paranormal. Then I take a look at my Goodreads shelves and the childhood chant of pants on fire runs through my brain! I do read and enjoy it and this sounds like a series that should be on my shelves.

Intriguing premise for a series, and of course, her book about NOLA will be a gem.

I recently finished reading two thrillers with paranormal elements. I have raved about every book John Hart wrote and looked forward to reading The Hush. It’s set in the deep woods where good and evil clash. It was a fine read, although my least favorite of his books, which tells you what a terrific writer I think he is. John Connolly’s The Woman in the Woods is another very good read—the 16th Charlie Parker. It also takes place in the deep woods (of Maine).

It is amazing to me that some writers can create different worlds from our own. It takes real imagination. Sometimes we need an escape to a world different from our own.

I'm with Kait. My first reaction is I don't read paranormal but when I really think about it, some of my favorite reads have been paranormal or had paranormal elements. And this series sounds fascinating!

Interesting piece. I'm always in awe of someone who can create and balance another world or different time periods through fantasy (I'm too literal for it to come naturally) - this sounds like quite a job well done.

Fascinating! I'm going to have to explore this for my TBR list.

Casey Daniels - a pen name - writes the Pepper Martin series of a girl who works for a Cleveland cemetery and the ghosts of those buried there often appear to her and want her to find the one who murdered them or did something else. The latest I read was the ghost of Elliot Ness, who really did live in Cleveland for a while and solved crimes. In this one he comes as sparkles because someone stole his ashes so he can't go on to wherever he would go after death.He can talk to her, though. Casey does do tours of this Cleveland cemetery although the name is changed in the book. President Garfield's mausoleum is there.