Most of the authors at Writers Who Kill write short stories as well as novels. Last summer, WWK blogger Paula Benson interviewed short stories writers. This summer, we want to canvas editors and publishers of anthologies to promote short stories and to point our readers in the direction of some great reads. This week we’re focusing on the Los Angeles Chapter’s anthology, LADIES’ NIGHT.
Please welcome Diane Vallere, the chapter’s president.                    E. B. Davis
What prompted you to create an anthology? 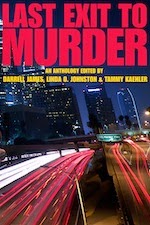 The Los Angeles chapter has published an anthology every other year for the past several years. We provide a chance for our members to receive a traditional publication credit (which is eligible for awards), and also to encourage new writers to become more involved in the chapter. A few authors received their first publication credit in one of our chapter anthologies. Stories from previous anthologies have received award nominations and wins, which is a nice boost for any writer’s résumé.
Royalties from the sale of the anthology go to the chapter, but we have found that the value lies much more in the opportunity that we provide for our members than in any incoming monies.
How did you develop a theme for your anthology?
Each of our anthologies has to do with Los Angeles in some manner. The past 3 anthologies have included the letters “LA” in the title: LANDMARKED FOR MURDER, MURDER IN LA-LA LAND, and LAST EXIT TO MURDER. LADIES’ NIGHT continues that trend.
Do you develop a “local” theme to entice readers in your area?
Yes. LAST EXIT TO MURDER, our 2013 publication, dealt with the car culture of Los Angeles. LANDMARKED FOR MURDER featured some of the city’s more notable landmarks.
Our announcement for LADIES NIGHT is:
From Valley Girls to Valley of the Dolls, the L.A. Woman has captured our imagination and redefined the fairer sex. CJ Parker is our lifeguard, Lucy Arnaz, our studio executive, Angelyne, our reality star, and the Black Dahlia, our murder victim. L.A. neighborhoods have spawned the Beverly Hills housewife, the Hollywood starlet, the Van Nuys dominatrix, the Santa Monica Surf Betty and the Manson girls, to name a few.
LADIES' NIGHT, the upcoming anthology by Sisters in Crime Los Angeles, will be composed of stories that dish out these women in a broad range of Southland flavors, each served on a rich bed of crime, of course.
How long did you give your writers to submit stories?
Our initial submission window is three months long. During that time we hold a workshop on short stories.
Did you adhere to the guidelines set up for anthologies by SinC?
Yes.
What was the response to your query for stories among your writers?
Since we opened for submissions in July, stories have been trickling in. In the past, stories have come in at the end of the submission window. We encourage people to submit early, so there isn’t an onslaught of entries on the judges, but people like to tweak until the very end.
What were the criteria for selection?
We have three judges who will read each of the stories and deliberate until they’ve reached a decision on the ones to be included. Stories must be less than 7,000 words.
Were the stories judged blind? How did you obtain judges?
The judges don’t know the identity of the authors during the judging process. Each of our judges is a successful author member of our chapter and was approached to be involved in the process
Did you hire an editor?
Our judges will also serve as editors of the anthology.
Was any thought given as to the order of the stories in the anthology?
The judges will be responsible for arranging the stories in the order they see fit.
How did you find a publisher, and who published your anthology?
LAST EXIT TO MURDER was published by Down and Out Books. Both they and we have been happy with the partnership, and they’ve expressed interest in publishing LADIES’ NIGHT.
Were you given a choice of covers?
For LAST EXIT TO MURDER, Down and Out listened to our cover input, and we worked with them on a few revisions to their original cover. I anticipate the same process for LADIES’ NIGHT.
How are you promoting your anthology and do you have a budget to do so?
We hold book launch parties for the new anthology, where each author is introduced and interviewed with one or two questions about their story. The anthologies are available for sale at our monthly chapter events and at book festivals where the authors are present. Press releases and social media blasts are also part of our promotion. We discuss the cost of any promotion and vote on the monies needed prior to spending.
Do you think that there is a resurgence of interest in short stories?
Short stories have always been a great way for readers to sample authors, and many writers show a flair for the short format. I am always impressed at how much someone can pack into a few thousand words!
Have any of your anthology’s stories been nominated for awards?
Two of the stories from LAST EXIT TO MURDER were nominated for Derringers.

Are you planning other anthologies?
LADIES’ NIGHT is planned for a 2015 release. It will be up to the incoming 2016-2017 board to decide whether they’d like to do another anthology.
Posted by E. B. Davis at 12:00 AM

It sounds like a good way to promote members.

Welcome, Diane. How nice that your chapter is putting out an anthology every other year. I've mentioned doing something like that in our chapter, but there doesn't seem to be much interest. Of course, although we originally started meeting just as a group of mystery writers five or six years ago, we've only recently formed an actual chapter.

Your Los Angeles themed anthology titles are making me a little homesick. I lived there for many years and remember unique women like Angelyne driving a pink Corvette with her pink dog. I bet LADIES' NIGHT will be terrific!

I love hearing how the various chapters handle this! It's such a great opportunity for the members, both as a learning experience and with the possibility of being chosen for publication. I especially like that you offer a short story course to help your members.

Warren and KM--we all agree that promoting our members is the #1 reason to do an anthology.

Gloria- a handful of mystery writers can get a lot done!

Kara-Angelyne still drives around in that pink corvette. I think I've stood in line with her at Rite-Aid on a few occasions.