A Writers’ Retreat of a Sort 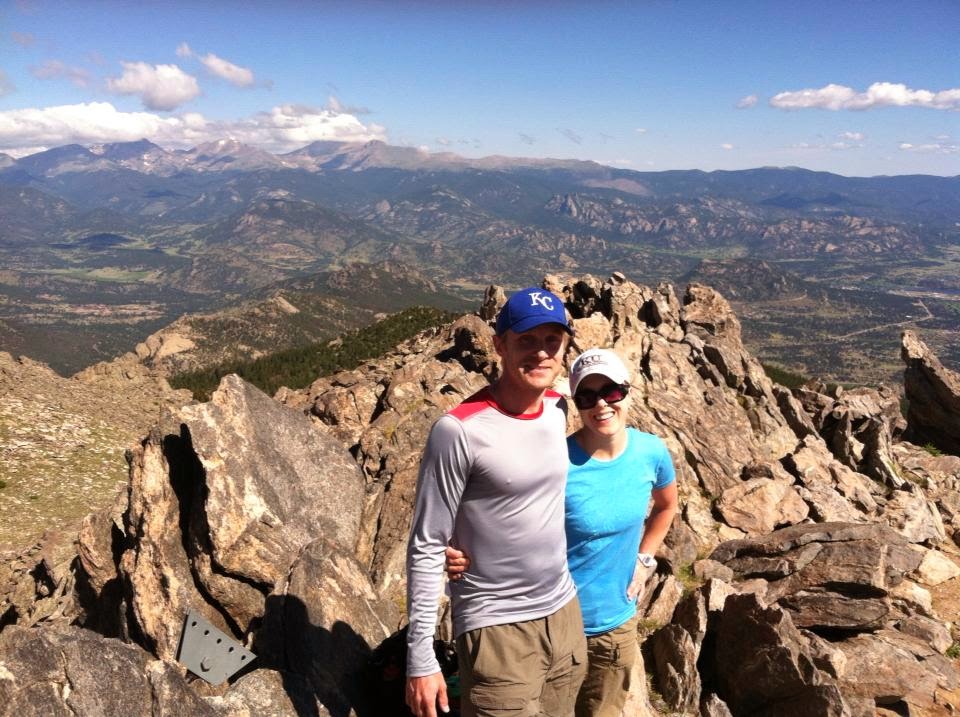 Starting today I have a rare opportunity for the modern writer: a whole week alone.

I have to tell you, this never happens. I’m married. I have a five-year-old. I am never, ever alone. Which is great, because I absolutely love my family and couldn’t imagine not having them around. But, like most people, I’m much more productive creatively when I’m flying solo with no distraction.

Which rarely happens. And when it does, it happens in little chunks here and there—just enough that I’m able to write and edit and hear myself think. But a whole week? Never. Ever.

How’d this come to be? Well, basically, I’m missing out on my favorite time of the whole year. Each summer, my family heads to Colorado with my parents and we spend a week hiking, eating and relaxing in the shadow of Longs Peak. It’s a great time, marked by cool mornings, sweaty jaunts up mountains (see above—the hubby and me on top of Twin Sisters last summer) and lots of reading on a wide porch.

And this year, I won’t be going.

I’m due to have a baby in September, and, after talking to my doctor, decided that suddenly spending a week at 8,000 feet might not be the best idea. I did go on the trip when I was pregnant with my son, but I’ll be nearly three months further along than I was then.

Because he’s awesome, my husband offered to take our son anyway—a great gesture and one that the kiddo will most definitely appreciate. He loves Colorado and he loves grandparent time—so win-win for the little man. I’m sure my husband won’t mind the fresh air either (again, see the above pic as proof), even while on single-parent duty.

While I’d much rather be curled up with some tea and a book in the shadow of Longs Peak, I’m trying to make the most of this very rare week alone.

When I’m not physically at my day job, I plan to be writing or editing—two things I don’t normally have much time to do in the evenings during the week. Obviously, I’m hoping this will mean getting tons of work done. Not only because that would be fantastic, but also because I may never get an opportunity with so much alone time again. Or at least for a very long time.

What would you do with a writer-ly week alone?
Posted by Sarah Henning at 12:00 AM

Enjoy your time alone. I have complained this summer that even though I’m retired and so in charge of my own schedule, between a late spring up north, wonderful, long trips and family visits, Jan and I have had little time alone at camp. We just finished a week plus dogsitting the granddog (who missed her family, but loved the freedom of the woods) and it was great. This week the family is back in force. They leave at the end of the week and I’m looking forward to one week by ourselves after family leaves before I do myself in again with a bridge tournament followed by Killer Nashville.

Let us know what you enjoyed most of your week alone.

I'm in the same boat, Jim. Family visits with no time alone. When everyone leaves and I should be working, I feel depleted and in need of personal R & R. It's a battle to be productive. I love writing, but I also need to regroup after giving so much of my time to family. No matter what you end up doing, Sarah, cherish the time and don't beat yourself up if you can't get everything done. Chilling out is also necessary.

I probably do need to chill out, E.B.:) That's definitely something I need to work on! I'll definitely build in some time for that.

Sarah, I'm grateful that I have a rather large family and friends, however, they do take up a lot of my alone time that I need for writing. It doesn't help that I belong to two book clubs and several local writing groups plus deliver Mobile Meals every other Thursday, also. I thought when I retired I'd have more time to write, but somehow it hasn't quite worked out that way especially since I retired I expanded my gardens thinking I'd have more time to work on them. Enjoy your quiet time, and don't let procrastination by doing other things get in the way of your writing.

We're back from the every-few-years vacation with my husband's family in Ocean City, NJ. (They lived in south Philly and their father had one week vacation a year. They always went to Ocean City. Now they fly their mother in from Cheyenne every couple of years and all meet in Ocean City.) I am so far behind on everything I feel like I'll never catch up.

I've retired, effective July 1, and I've had a few health issues and am still recovering, with more issues to handle, I feel like I haven't figured out a productive writing mode. It seems like I'm still spending an inordinate amount of time with doctors and tests.

I have nothing under contract right now, and I've been writing a lot of short stories.

And I just got a new computer. I have spent hours trying to get it to do what I want (thank goodness for patient tech support people) but by the time I work through a problem, I'm so frustrated, I figure I better move away from the computer or I'm liable to toss it through a window or something.

I'm also taking an on-line course this summer. Not a smart thing to do when you can't make you computer do what you want it to.

However you use your time, for writing or for regrouping, enjoy it! In my experience, two young children take up more than twice the time of one.

I would love a week without interruptions or crises to brainstorm and outline my historical mystery.

Enjoy your week, Sarah, whether you are writing or chilling!

That's amazing! Aren't hubbies great?! Mine did the same thing once when I was finishing final edits and fact-checking on a book. Enjoy your time!!! From one mom/writer to another--so happy for you! (And I agree with E.B. about chilling out, too!)