I forced myself to take a few calming breaths before I barreled on. Lamaze breathing often comes in handy. Except for the two occasions when I was in labor.
Cindy Sample
Dying For A Date (Page 86) 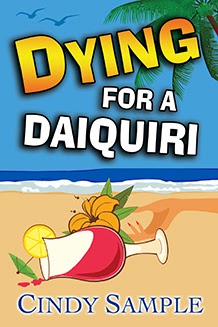 When I realized Cindy Sample had a funny mystery series out, I decided to read the first one, Dying For A Date, which led to reading Dying For A Dance and Dying For A Daiquiri. Klutzy main character Laurel McKay, a divorced, mild-mannered mom and bank-loan officer, solves murders while trying to find a love life. As a former mortgage company CEO, Cindy has no problem writing the technical aspects of Laurel’s job.

You’ve given lots of background detail and history for Placerville, CA, your setting. Is Placerville real?

Placerville is a real town located in the gold country east of Sacramento. For a few years during the gold rush, it was known as Hangtown.  It’s the only town I know of that has a dummy hanging over the spot where the original Hangman’s tree was located. 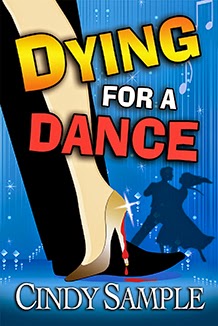 A couple of male readers have commented on Laurel’s klutziness, which isn’t even close to my own. If we had more time I would tell you about my snorkel mask injury, spa injury, and a hotel bed frame that attacked me when I wasn’t looking!

Although Laurel’s mother is a great role model, Laurel doesn’t want to be like her mother. Is this a daughter’s universal rule?

It’s certainly a rule in my family!

I’m not sure if Laurel has ever found any chocolate she doesn’t like. I prefer dark chocolate myself. Unfortunately, there are many days when my carbohydrate count exceeds my word count!

In Dying For A Date, the readers meet Laurel’s ex, then he fades away. Has Laurel gotten rid of the cad for good?

There is a very good reason why Laurel’s ex, Hank, faded into the background. Let’s just call it   debut author error. In book four, Dying for a Dude, Hank returns from a construction job in southern California and is arrested for murder. Poor Laurel finds herself torn between her boyfriend, Detective Hunter, the head of homicide, and helping solve the mystery to get her ex-husband out of jail. I just love creating conflict.

Although her BFF owns a spa, Laurel seems unable to slow down enough to enjoy the treatments. Will she get her day to relax at the spa?

I originally was going to set a murder at Liz’s spa and title it Dying for a Diet, but no one was very 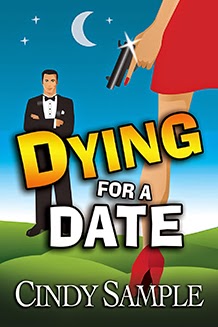 enthusiastic about the title. It was quite a clever plot so you never know.

Most of your characters are well drawn, but gay buddy, Stan, seems a mystery. Will we find out more about Stan’s background?

Stan will have more of a leading role in Dying for a Donut coming in 2015. The book will take place in Apple Hill, where we locals, and a million tourists, truly die for their fresh donuts! When my daughter moved to Montana, she made me ship a dozen to her. And in case you’re wondering, so far I have 112 additional D titles. I guess I’ll be writing until I’m 200!

Were you a closet romance/mystery writer while serving as CEO of a mortgage company?

I was an un-closeted historical romance and mystery writer while working at El Dorado Savings in the late seventies. But between working 8 hours a day and throwing up 24 hours a day with two pregnancies, the books moved lower and lower on my “have to do” list. Once I became a single soccer mom traveling CEO, those steno pads were shoved somewhere, never to be found again unfortunately. But my creative mind never stopped plotting!

How did you arrive at a blended genre?

I’ve always loved mysteries and after discovering Janet Evanovich, I realized that I preferred humorous mysteries with a little romance thrown in. There were very few series with a single mom as a protagonist and I definitely wanted a realistic character that readers could identify with. My favorite compliment occurred when a local newspaper columnist/reviewer was traveling in Jamaica. She came across a scene in a bazaar and turned to her husband saying, “I wonder what Laurel would do in this situation?” To which he replied, “Laurel who?” Don’t you love when people can’t stop thinking about your imaginary characters?

What’s next for Laurel in Dying For A Dude?

Dying for a Dude introduces Laurel’s 88-year-old grandmother. Laurel’s real estate broker mother wants Gran to move to a retirement home, but Gran is fighting her all the way. While walking the family property, Laurel’s mother disappears from sight. It turns out she’s fallen down one of the old gold mineshafts of which there are hundreds in Placerville. She lands on something hard, hoping she’s discovered a pile of gold. Unfortunately, it turns out to be a 150-year-old skeleton. Thus, the first mystery begins. Of course, I don’t stop there. You’ll be able to find out more when it’s released on November 1st.

Are you a beach babe or a mountain gal?

I don’t know if it’s due to my Libra birthday, or if I just enjoy all aspects of nature, but I am a beach and a mountain gal. If they are together, even better! 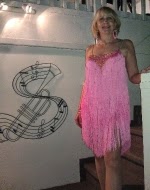 Cindy, your books sound delightfully funny and entertaining. Thanks for being with us at WWK. Elaine, another fabulous interview!

Hi Cindy - What perfect beach books! I can't wait for Dying for a Donut. Are the donuts apple cider donuts?

Hi Paula. Elaine has come up with such an entertaining set of questions. I loved visiting with her!

Hi Shari, our Apple Hill area hosts about sixty orchards and a few wineries so there's apple cider, apple wine, and apple donuts in every combination. I'm salivating just thinking about them now!

Welcome to WWK, Cindy. Your series sounds like a delightful read. I'll have to try them out. It's sure to beat some of the depressing books my book clubs occasionally pick.

Hi Gloria. Many of the local book clubs around this area have chosen my books as a nice break from all of those wonderfully written but occasionally depressing book club picks! Thanks for commenting.

Cindy, what an adorable interview:) I related to several comments...especially your chocolate feeding frenzy ;) All the books sound wonderful, I've downloaded a few, but (holding head down in embarrassment) they're in my TBR group. So many books, so little time :) But, as hopeful redemption - girl, that shot of you in the hot pink mama outfit, is definitely something to die for! Hugs and wishing you fabulous sales ~ Lo

Lo, do not hang your head in shame. My TBR pile is almost a room full of wonderful books waiting for me to read them. Thanks for the compliment on the hot pink dress. That outfit proves I will do anything to sell books even if it means dancing in a public showcase with only one practice session!

I love mystery writers with a sense of humor. It creates a wonderful balance. And yes, I'm a big Evanovich fan too. I'm looking forward to reading your next novel.

Thanks, Jacquie, for commenting. Writing humor and suspense does make for an interesting balancing act!

What a wonderful interview. Totally enjoyed it! :)

Hi Cindy-An engaging and humorous interview just like your books. Write on!

Your books sound wonderful, Cindy. I'm impressed that you have an additional 112 D titles! I imagine Dying for Dark Chocolate is on the list.

Hi LJ and Lynn. Thanks for dropping by and your ongoing support, and taking the time to prove you're not a robot! I may need new bifocals.

Kara, I don't think DYING FOR DARK CHOCOLATE made the list. Now that cover sounds yummy!

Great interview, Cindy. Can't wait till I get up the mountain high enough to read your books.

Great interview on a wonderful new blog!
Congratulations to both of you!

Great interview, Cindy. Love the books. I still haven't figured out how we manage to make murder humorous but we do. Looking forward to the next.

Wow! That's a gorgeous pink chemise!
And a terrific interview to match. I was interested in your comment re: few other series with a single- mother protagonist.Actually, my first 5-book mystery series (St Martin's) features a single mother dairy farmer. Not as funny as yours, but patches of humor along with the cow patties!

Hey Cindy. Great interview and great humorous mysteries. Looking forward to the Donut caper, as all your books are a hoot!

Thanks, Nikki and Susan for stopping by. I absolutely love how supportive our author community is!

Nancy Tesler and Nancy Means Wright, I did not discover your two great "single mom" series until after I started writing. I love your work!

Thanks, Elaine. I'm looking forward to the research for DYING FOR A DONUT. It might even be more fun than DYING FOR A DAIQUIRI!

I love humorous mysteries and crime fiction! Thanks for an introduction to a series that sounds like it's a hit in both areas.

What a fun interview! Somehow I found you on Twitter, Cindy, and then found your blog. I'm looking forward to checking out your mysteries, too! Love your sense of humor!

Thanks KM and Susan. I actually took a break and went to the movies like a normal person - gasp! Although as usual I was editing their dialogue. So nice to meet both of you!

Cindy-thank you so much for the interview. Forgive my lack of response yesterday. It was a friend's birthday. We were celebrating on the beach. An event happen where life was threatened. Just when we least expected it.

Thanks for the interview, Cindy. Your humor is greatly needed in this world where we all need a reality break from time to time.

Hi E.B./Elaine, thank you so much for your perspicacious (I've waited 30 years to find an appropriate use for that word) questions:-) I'm sorry your day on the beach was so traumatic. Here's to more humor and sunshine in the rest of your week!