Happens All The Time 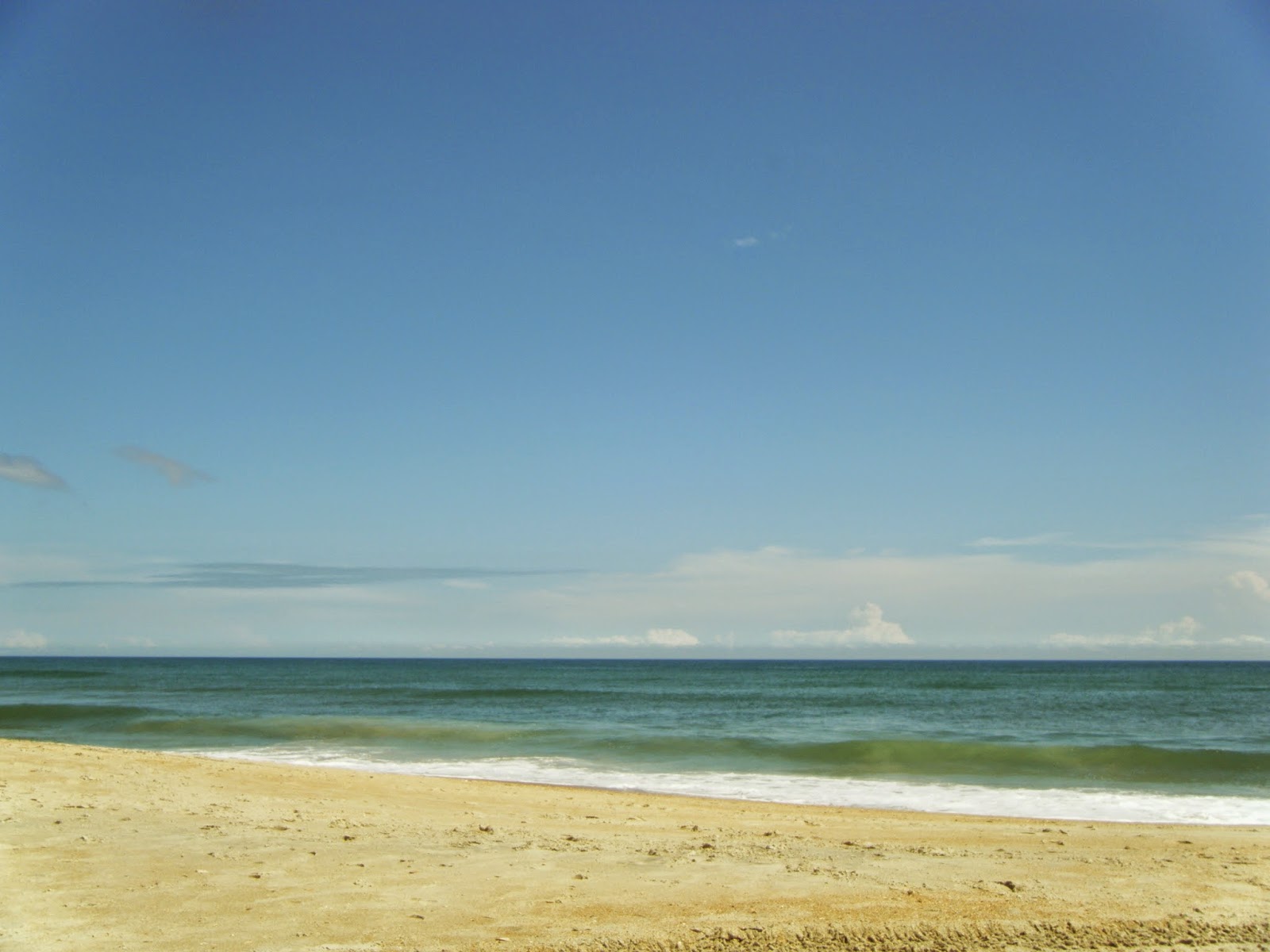 Our chairs were in a semi-circle so we could watch the ocean. It was late afternoon on my friend’s birthday. I had just returned to the beach with a heated appetizer and had poured her a glass of champagne.

We heard a child's scream.

At first, I thought the child was having a meltdown, an event I remembered from years of motherhood past. I ignored the situation to let the parents handle it and turned away to get a glass of wine out of the cooler. But then, two children started screaming. We saw a woman enter the water and a man waving his arms from beyond the breakers. The children's father was in trouble.
After assessing the ocean, we realized that there was a rip current nearby, which is a usual Hatteras occurrence, but the waters were rough since Tropical Storm Bertha had passed us by the day before. The woman who entered the water was the man’s wife and the children’s mother. The rip had taken him out into the ocean.

While I was heating appetizers at the house, my friends had observed the family. They were staying 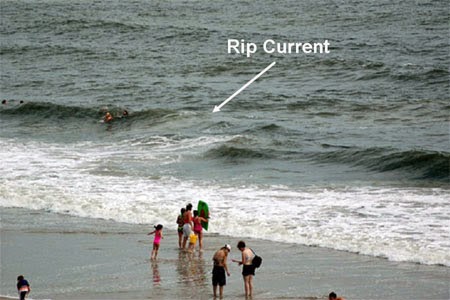 at a nearby campground, probably their first time on Hatteras Island, and obvious novices with the waters around Hatteras.

My friend called 911 since the victim's wife went into the water without a floatation device to save her husband. A man, who had been talking with the couple earlier, jumped into the surf with a boogie board, he said later, with the intention of saving the husband. He soon realized the wife was in trouble, too. She fought him, wanting to save her husband, but in her panic didn’t realize that she had set herself up as the second victim. The man won and brought her back to the beach. We were relieved.

A National Park Service Officer arrived, followed by a rescuer with a surfboard, who entered the water before the jet-ski team arrived. All rescuers are volunteers on Hatteras Island.

We stood on the dunes, and the National Park Service officer stood on the hood of his truck using binoculars to see the victim over the waves. We directed the surfer pointing in the man’s direction. The surfer found him, but by that time, the man was unresponsive. The jet-ski team arrived and brought him to shore. We stood watching, not gawking, concerned for them. We offered bottles of water to the victim's wife and children. An officer took the family off the beach, we think, fearing shock, but also to avoid their witnessing the resuscitation effort. It seemed forever, but probably after fifteen minutes, they got a pulse. With IV attached, they loaded him into a four-wheel ambulance. From there, they transported him via airlift to a Norfolk hospital. We will try to find out his status.

We celebrated no more and sat down in our chairs in disbelief. How do you know what you don’t know? A novice, a dangerous ocean, a naive family. The man hadn’t seemed to panic, but we don’t know if he fought the current or if he just wasn’t a strong swimmer.

Just as Linda Rodriguez’s unexpected surgery—the unexpected happens—the reason for my blogging in her place today. Having survived the surgery, Linda is recovering. We’ll pray the father is recovering, too.

Normal life, happy vacation, and a disaster in a blink. It happens so fast. It happens all the time. 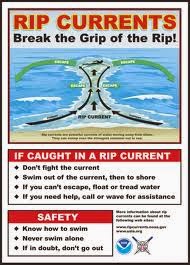 The problem with ignorance is we often don’t know what can indeed kill us. This is different than stupidity, which is having knowledge, ignoring it and doing something contraindicated. Sometimes you can prepare for a new place, or event or thing by reading instructions, paying attention to warnings, etc. Other times events sneak up on you and come as a surprise.

Sending best wishes and healing thoughts to the family.

So, so sad, EB. Thank you for sharing this important information.

How one place can be both heaven and hell at the same time amazes me. For me, Hatteras is heaven. I'm sure for that family it was hell. However, I recognize that there are dangers here, have educated myself, know what to do. The waters around Hatteras aren't known as the graveyard of the Atlantic without reason.

All of my friends and family have gotten into rip currents. I know how it can freak you out. You have no control. People fight it when they need to go with the flow quite literally. One problem for this family was that they were alone. Having friends and family on the beach watching and knowing immediately when something is wrong helps.

When I was caught in a rip current, I looked to the beach and pointed to the left or right. My friend pointed to the side I was closest to. You can be two feet from the edge of one without knowing it. From the beach, you can see the rip current. Make the wrong choice as to which way to turn and swim is a crucial decision.

If all else fails, flip on your back, sing show tunes to yourself, and wait for help.

I have seen and been in situations where a lack of information could be fatal. As Jim said, when you don't know what it is you don't know you are truly at risk. I was hiking in the mountains with friends when one friend and I got off the trail. We stopped and shouted repeatedly until our other friends replied so we knew which direction to walk. Our friends did not respond for some time (seemed like an hour; probably was five minutes.) They said they thought we were joking by calling for help. We were not.

One of the stupid things I did was not fill up my water bottle all the way when backpacking in the mountains because I was the last in line and my nephew was the one using the water pump/purifier and he was getting tired of pumping so I said it was enough. It wasn't and the water supply we thought was ahead was capped so I came close to dying of heat exhaustion on the side of a mountain with temperatures in the upper 90s. It was a case of not wanting to be a burden to anyone. I think that's a female thing, maybe.

Knowing what to do is important Shari. But knowledge alone may not help. Experience and teamwork added to knowledge works.

Seriously, before you start out anywhere even in the ocean--a hand signal, a key phrase, something that fosters communication to let other know you are in trouble before you get into trouble--helps!

How awful, Gloria. Dehydration can happen anywhere--even with water all around you. I'm glad you made it, but that next water stop that wasn't, should have been advertised as closed! I hope others shared with you.

Jim, I can't imagine what that wife is going through. Anticipating disaster is bad. No one expects the unexpected. (Don't you hate it when people say to expect the unexpected?) My thoughts and prayers are with them.

As beautiful as the beach is, it has its dangers. Thanks for reminding us, E.B. My heart goes out to that family. I'm thinking also of Linda and wishing her a speedy recovery.

E.B., hope you are continuing to have top ten beach days this year.

It's frightening how everything can change in a heartbeat. Thank you for reminding everyone about rip currents and what to do if we're caught in one. Sadly, I've heard about other deaths this summer due to rip currents.

My thoughts are with the family and, of course, Linda.

What a tragedy for everyone concerned!

We get so used to nanny-type safety regulations in so much of our lives, we forget that Mother Nature can't be regulated like that.

This summer, I've heard about several people being lost to strong currents and rip tides.

I can remember several scary times when, as a child, I was caught in currents. Once a huge wave came in and swept a large group of people, including me and my siblings and cousins, out over our heads. It was at a protected beach, so the lifeguards immediately launched life boats. Several nearby surfers went to help. I was young, but I was a strong swimmer and "swim with the current, next to the beach, until you can angle in" had been drummed into my head. I remember a surfer passing me and asking if I could make it on my own, since I was coping with the situation and several other people weren't. I told him yes, and did make it back to the beach on my own, although considerably far away from where I had entered it.

What an incredibly sad story. I am praying for the family and Linda, too. Everyone's swimming safety tips are appreciated. We have educated our children about rip currents, but we don't visit the beach often, and a reminder is in order.

That is so unbelievably sad. Living close to the water as I have for so many years,it's not an uncommon story, but a tragic one.