For me, plotting is the most difficult part of the writing journey. I think this stems from the fact that I'm an only child and, when I first began creating characters, I thought of them as playmates instead of people with their own stories. I wanted them to stick around so we could continue to have adventures together. After all, that's what happened to the casts on television programs I watched. They kept returning each week for a new episode.

Writing short stories has been a good experience for me because it's forced me to find endings. But, I still struggle to understand and apply story and character arcs.

Recently, I found two books that have been very helpful in guiding me through this process. It's interesting and completely accidental that I selected and read them in the order I did. They fit together beautifully, as if the first serves as an overview and the second explains the basic principles in greater detail.

As far as I can determine, the authors worked independently and did not plan their works as companion volumes. The only connection I've discovered is that they are both active in writing for the Christian marketplace.

The first book is The Plot Skeleton (2013) by Christie Award winner Angela Hunt. It is in fact the first of nine books she has written that provide short lessons about writing craft. The series is called "Writing Lessons from the Front" and includes the following subjects: (2) Creating Extraordinary Characters; (3) Point of View; (4) Track Down the Weasel Words and Other Strategies to Revise and Review Your Manuscript; (5) Evoking Emotion; (6) Plans and Processes to Get Your Book Written; (7) Tension on the Line; (8) Writing Historical Fiction; and (9) A Christian Writer’s Possibly Useful Ruminations from a Life in Pages. I've ordered the entire series, so I'll update you as I read and learn.

While The Plot Skeleton is short in length, only 32 pages, it is a strong concept and gives authors an excellent visual image for designing story structure: a stick figure skeleton. The skull represents the protagonist with an obvious problem and a hidden problem (the two eyes). The smile reminds you to give the protagonist an admirable quality. The neck indicates the inciting incident. Following the spine (the path toward the goal) and ribcage (complications) allows the author to map out a story line that reaches a point (the hip) where the protagonist experiences failure and must seek assistance. The thigh is the receipt of help, the kneecap is the lesson learned, the calf is the epiphany and decision to act, and the feet are the resolution.

The second book, Power Elements of Story Structure (Power Elements of Fiction Book 1) (2014) by Rebecca LuElla Miller, began as blog posts. Miller provides a step-by-step process of developing a story, beginning with an exploration of what plot is, then considering specific aspects of plotting like three-act structure, scenes, stakes, and introducing information while keeping the story moving. In demonstrating her points, she makes reference to excellent resources and uses specific examples to demonstrate effective use of the principles she describes. 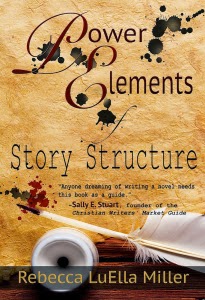 For example, Chapter 14 explains how backstory may be revealed through character memories or flashback scenes. Rather than having a character hear a bell chiming and think that it reminded him of a past experience, Miller suggests the sound of the bell causing the character to react in a manner that became habit when he heard the bell as a boy. The Amazon listing indicates Miller's book is the first of a projected series.

I hope you might consider each of these books on plotting and check out the authors' websites. Both are experienced and knowledgeable writers with the ability to teach the skills they have learned. Also, they are generous with their advice. Angela Hunt's website is http://www.angelahuntbooks.com and Rebecca LuElla Miller's website is http://rebeccaluellamiller.wordpress.com/.

Paula, I guess I never thought about this in any depth. Maybe it's because I'm mostly a pantser. I have the general idea for the book in my mind before I start; murder and why they decide to murder, the victim, and the general idea. I keep a running synopsis of each chapter, the day and time of day and the characters in that chapter, and then decide what characters need to return, etc. and what needs to happen next as I go along. Maybe that's plotting. I never really thought of it as such before. My current book is only different from former ones because almost half way through I changed my murderer.

Every aspect of my writing can improve, but the biggest weakness is developing a market for my novels. People like them if they read them, but can’t read them if they don’t know about them.

Writing is one area where age and practice can improve abilities. Practice Prctice

Plotting is hard for me, too.
I get the beginning and ending just fine. The middle throws me for a loop. Even for short stories it is a tedious process. It hurts but it is a good kind of hurt.

Plotting doesn't come easy for me either. I recently read Write Your Novel From the Middle by James Scott Bell. It gave me a new way to look at the story, which I found helpful.

Paula, these look like really good resources! I don't have much trouble plotting, per se, but do have problems with my villain being obvious to some of the more experienced mystery readers. Maybe that comes from writing so many short stories and the fact that they are more about the hunt (as in suspense) than they are traditional "whodunnits."

I appreciate learning about these two resources, Paula. I'm one of the authors who believes it's important to outline a plot before starting to write, even if it's rough and needs tweaking later.

My favorite book for structuring mysteries and suspense is Carolyn Wheat's HOW TO WRITE KILLER FICTION: The Funhouse of Mystery & the Roller Coaster of Suspense. Wheat describes a four-arc system that I've found helpful for creating a high-level outline of the whole plot.

Great topic, Paula. I spent many hours this year researching books about plotting, but my results weren't great. It's nice to hear your recommendations--along with others mentioned in the comments. Years ago, I used (and liked) THE MARSHALL PLAN WORKBOOK, but I think it's only available used these days.

Gloria, I always enjoy your books and stories. Thanks for sharing your novel writing process. I'm going to try your approach.

Jim, you're one of the most savvy marketers I know. And your novels are terrific. Everyone, spread the word!

Warren, I concur. And, I'll keep trying until I get it write. I mean right!

KB, I know what you mean. Middles make or break a story. Keeping them moving is a challenge.

Sandy, I'm glad to have your recommendation. I had seen Bell's book, but haven't read it yet.

Bobbi, I hope you have a chance to check these books out. You're right. There is a real adjustment going from shorter to longer works.

Thanks, Jacquie. I'm becoming more of a plotter than a pantser, but I'm still in between.

Maryann, I love Wheat's book, too. I especially appreciate how she distinguishes between mystery and suspense.

Susan, thanks for your recommendation. It's hard to find good books that concentrate on plotting, isn't it?

Hi Paula, I am now feeling the need to buy all these books! Thank you for all the great resources.
I haven't written enough to figure out what kind of writer I am, but I do know that finding a good writing resource gets me thinking about technique, and I know that will make my writing better.

Thanks, Shari. My box arrived from Amazon with Angela Hunt's complete series. I'm looking forward to digging in and learning a great deal.

Thanks for sharing these reviews. It's really interesting to get a glimpse into other writers' processes. I read WRITING FROM THE MIDDLE recently as well. Loved it. I also really appreciate advice for screenwriters-- books aimed at the movie industry tend to have tight plotting advice. Two in that category stand out for me. 1) I adored STORY by Robert McKee and 2) SAVE THE CAT by Blake Snyder.

Thank you for the book reviews, Paula. I placed a few on my TBR list.

I also recently read James Scott Bell's book. It gave me a new perspective on constructing a story and the importance of the middle.

Riley and Cara, thanks so much for the great recommendations. These are books I will definitely check out. Hope today's a good writing day for all!