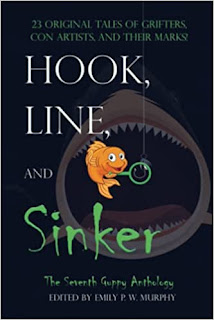 Today’s message builds on yesterday’s post by Debra H. Goldstein. The anthologies organized and published by the online Guppy Chapter of Sisters in Crime have had a wonderful and pervasive influence not only in nurturing both new and established authors, but also in encouraging more people to read and try their hands at the craft of short stories. The recently released Hook, Line, and Sinker is the seventh in the series and features twenty-three stories, including three by Writers Who Kill (WWK) partners Kait Carson, Mary Dutta, and KM Rockwood. In addition to Debra H. Goldstein’s (along with Carol L. Wright’s) work in organizing the endeavor, Guppy President Susan Van Kirk’s writing the introduction, and James M. Jackson’s Wolf’s Echo Press being the publisher, WWK partners can claim some serious bragging rights in this volume.

Looking at the history of series titles, the members who wrote the introductions, and the editors who worked with the authors to make the stories exceptional, one realizes the great scope of talent that has gone into producing these anthologies. 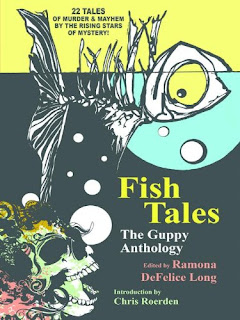 Fish Out of Water (2017), introduced by James M. Jackson and edited by Ramona DeFelice Long

The Fish That Got Away (2021), introduced by Susan Van Kirk and edited by Linda Rodriguez 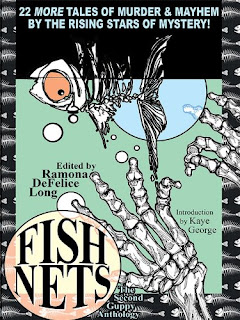 Check out the contents of these volumes and you’ll find familiar names: authors who have written successful mystery series, received awards, and served in distinguished capacities among numerous writing organizations. Many have credited being in the Guppy Chapter as a motivating experience. Thankfully, many also remain as Guppies and are generous in offering advice and information to other members.

My story, “The Train Is On The Tracks,” appears in Fish or Cut Bait. While it was not my first published story, it represented a unique opportunity in many respects.

First, we received feedback from the anonymous judges who made the selections. For that volume, there were three judges: one very complimentary, one very negative, and one right in the middle. Because my story was loosely based on an incident that happened at my work, I found it amusing that the negative judge criticized it as something that could never happen. 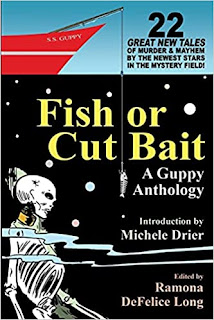 Second, we had the extreme good fortune to work with a talented and caring editor. Ramona DeFelice Long truly put her heart into our volume. She spent a great deal of time with each of us. Georgia Ruth’s story, the first in the anthology, later was included in a best mysteries of the year. Later, I worked privately with Ramona on several stories and will treasure her wise advice and counsel. I know from being a WWK partner of Linda Rodriguez what a fine writer and editor she is. I’m very impressed that Emily P.W. Murphy not only edited but also designed the cover for Hook, Line, and Sinker.

Why not start your new year right by reading a short story a day? Here’s the group of authors you’ll find in Hook, Line, and Sinker: 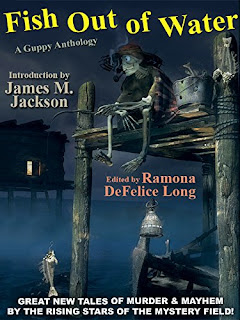 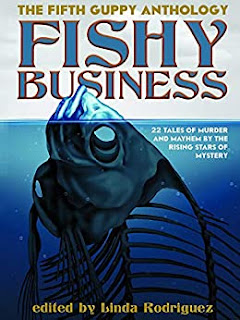 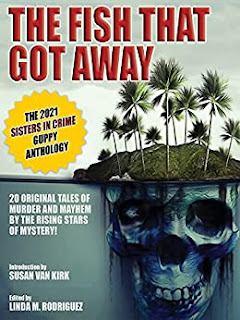 The Guppy anthologies are such a fun project!

Although I have a feeling they are a lot more fun and a lot less work for those of us who have stories in the anthologies, as opposed to those who put them together.

I have learned so much from being included in these projects.

And since I try to read a short story every night before bed, I love having them to add to my collection.

Kathleen, I always love reading your stories and am so glad they are included in the Guppy anthologies.

Congratulations to all involved, especially the WWK crew! I know what book will be on my bedside table soon.

A fun reminiscence of the past issues, some of which contain stories of mine.

Each one, after the first, had a theme. In my usual fashion, I pushed the boundaries of some of those themes, and sometimes that worked and other times, I didn't make the cut!

Jim, I think the challenge of crafting a story that matches the theme helps stretch and refine our writing skills. I always enjoyed your stories in the anthologies and am sure those not accepted found good homes.

A great trip down memory lane! I was president of Guppys when the first anthology was born - it was a fun project, and wow, we're up to the seventh. Well done to all who had a hand in this anthology and those from the "olden" days.

I'm so impressed by the Guppies - for all they do and their stellar stories. Thanks for this follow-up on Debra's post, Paula.

What a wonderful labor of love. Can't wait to start reading!

Kait, congratulations on beginning this great series as a Guppy President and upon your story appearing in the latest volume!

Molly, I agree. It's wonderful that these folks continue to share and encourage new authors.

Lori, I know you will enjoy!