A Bit of Starlight in "The Locket" by Susan Van Kirk

“That was the beauty of the Roof Garden. If you looked over the edge, you could see people dancing in the street and on the sidewalks. The music simply floated down there from the top of the building, and a whole ‘nother dance was going on below. From above, you could gaze down on the couples and the glowing streetlights. You see, back then, even if you couldn’t afford the dance, you could still have a little of the starlight.”

This imagery of starlight comes from a novella I wrote as a companion piece to my Endurance Mysteries. Back in 2016, I published an 82-page novella about my gorgeous, smart, biracial detective, TJ Sweeney. It was called The Locket: From the Casebook of TJ Sweeney, and because it was a novella, I put it out only as an ebook. Normally, the Endurance Mysteries featured Grace Kimball, retired teacher, but for this brief moment, I decided to let her former student and detective friend, TJ, have the spotlight.

The story featured a body found in a construction site in the present day that gave TJ a puzzle to solve. With the body was a locket and a ticket to a dance venue. It soon became apparent that this was a murder victim. Why was she killed? Who was she? Because the bones dated back to the 1930s, it was going to be a tough puzzle indeed—before DNA, before databases, before a lot of things. As TJ dug into this case, it soon became personal.

I also meant this story to be a tribute to my parent’s generation. In Galesburg, Illinois, where I grew up, the Weinberg Arcade still stands, a brick-and-mortar office building downtown. During the 1930s and 1940s, however, the roof of that building became a glittering dance venue featuring the Big Bands, who toured throughout the Midwest. Tiny Hill, Lawrence Welk, Tommy Dorsey, and Paul Whiteman were just a few of the band leaders whose bands played at the Roof Garden. It was an oasis in a stormy time. My parents went there as often as possible and particularly when my dad was home from World War II. 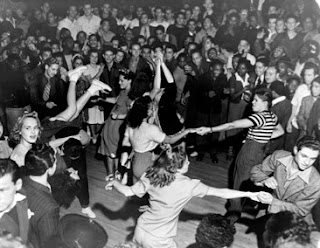 Besides researching anecdotal accounts with Roof Garden dancers at the library archives in Galesburg, I rounded up an amazing woman who had gone to the Roof Garden when she was fourteen. She gave me detailed information and became a character named Marjorie in my novella. 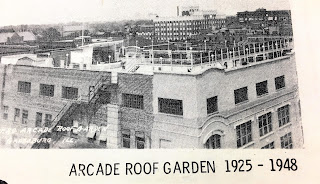 I asked this woman about dance nights.

“On the dance nights, especially Saturday nights, you had to buy a ticket to get in, and it cost twenty or twenty-five cents. It was a different time, you know. There was a coat check guy who was Black, and an occasional musician was Black, but otherwise the crowd was all white people. Smooching or other displays of affection were frowned upon, and they had security guys there. But never, in all those years, was there a fight or brawl.”

“And soldiers? Were there soldiers?” I asked. 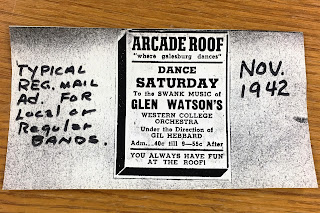 “Oh, yes. You see, the Mayo army hospital was on the north edge of town. [One of sixty-three army hospitals built expressly for war casualties, I later learned. It opened in 1943, and because Galesburg was a major railroad hub, a special spur was created to offload the injured.] The patients who were ambulatory could take a bus downtown and walk a couple of blocks to the Roof Garden. Since Knox College [in Galesburg] had a ROTC program, many of their air cadets would come to dance during the 1940s.” 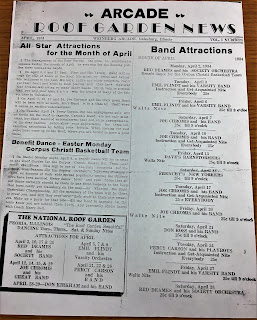 “We danced for hours doing the jitterbug, fox trot, tango, and waltz. Two of my favorite songs were the Five O’clock Jump and the One O’clock Jump. And we wore our school clothes: bobby sox, saddle shoes, and pleated skirts.”

Another source of information for the story was my stepmother. She had worked as a waitress in a soda shop in downtown Galesburg in the 1930s. Years ago, she told me a horrifying story about a racial incident where she worked. That story stayed with me. Because The Locket has a theme about race relations in the 1930s, I included this story and put it in the mouth of TJ Sweeney’s mother. 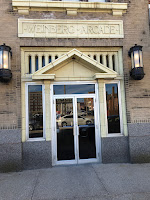 The nostalgic and stardust quality of the story is juxtaposed with a terrible murder. The way TJ Sweeney goes after the identities of the victim and the killer displays her cleverness in dealing with a world far removed from our modern-day technology. Lots of twists and turns highlight her search. And yes, it becomes personal.

Two of my favorite images from the novella came from my imagination and from my source. I pictured soldiers milling around in their uniforms, many smoking, and waiting for the bus to pick them up and go back to the army hospital. The second image was of the people down on the pavement four floors below, who could clearly hear the band music and were dancing on the sidewalks and in the streets among the hazy glow from the streetlamps. If you couldn’t afford the price of admission, you still could share a little stardust.

My source ended our conversation with a wistful comment. “Eventually the war ended, and everything changed.”

Yes, a decade later, Elvis Presley would show up and my parent’s generation would be appalled. Now I see why.

[Photo credit: Except for the modern-day door of the Weinberg Arcade and the book cover, all photos came from the Galesburg Public Library Archives and are use with their permission.]

What fun history to be able to include in your novella. My father had a similar experience (the dancing, not the murder) when he was in an army hospital in California recovering from shrapnel wounds.

Oh, that’s cool about your dad. It was fun to go back and think about that time and what life was like then.

What a lovely tribute to your parents and their generation!

I love this blog so much. The imagery is so beautifully drawn.

Wonderful post, Susan. I can hear the music under the stars and feel my feet starting to move.

What a delightful backstory! My parents must have been of an age with yours. They often spoke of the dance halls in New York City. I don’t know if any were true rooftop, or simply top floor. It was a far different time. I just finished, and loved, Marry in Haste.

Well, thanks everyone. I often have people ask for another story about TJ Sweeney, but I just haven’t had time.

A tribute to the big band era and the people who sacrificed so much in WWII. So great to hear about how they still enjoyed life.

It was a lot of fun to research, Kathleen!