An Interview With Kait Carson

Kait Carson is one of the members of the Writers Who Kill blog group. Early in my writing career, Kait reached out to me through the Sisters in Crime Guppy Chapter and offered to review and comment on my work in progress. She helped me turn it into a much better manuscript. Over the years, we have exchanged manuscripts, offering and taking advice from each other about what works and what could be improved. Although we have never met in person, we have become good friends. So when Kait regained the rights to several of her books and decided to reissue them herself, I was thrilled for her and wanted our readers to learn more about them and about Kait. The first book to be reissued, Death by Blue Water, comes out on January 24, 2023. 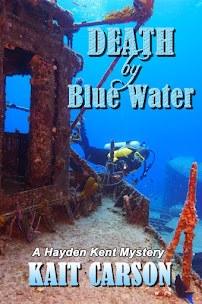 Hayden Kent takes to the world beneath the sea to come to terms with her broken heart. Instead of peace, she discovers the body of her ex’s brother clad in a swimsuit and anchor chain. How did Richard end up in the wheelhouse of the Humboldt, and why do the cops claim she was the last person to see him alive? He never showed at Faulkner Marina, or did he? A vicious migraine robbed Hayden of her memory of that night. The clues she follows to save herself uncover criminal activity at the highest level. Can she find the killer before he drowns out her life?

With your background working for a law firm, what inspired you to write a murder mystery?

There’s the old saying of write what you know. I’d been working in the legal field since 1989. Our firm enjoyed a lively trusts and estates practice. We also had our fair share of probate litigations, Bits and pieces of those practice areas show up in Death by Blue Water, but the inspiration was a dive I made on the wreck of the Thunderbolt. I was circling the wheelhouse and something floated up, peeked through the wheelhouse window, and then dropped from sight. It turned out to be a plastic bag, but at first glance, it looked like a hand. The scene lodged in my imagination, and murder was the only explanation for a hand at that depth.

In Death by Blue Water, you have some suspenseful underwater action scenes with terrific details about diving. Are you an experienced diver or just really good doing research? 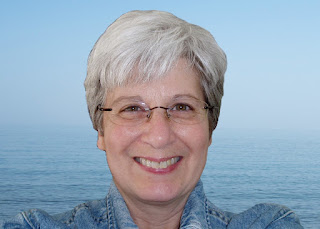 Thank you. I fell in love with the underwater world in college and was certified as a diver in January of 1972. I currently hold an advanced certificate, and my first love is diving deep wrecks.
In the middle of January, I enjoyed reading Death in Blue Water with its setting in the Florida Keys. I could almost feel the warm waters off the coast. Why the Florida Keys?

That’s another case of write what you know. The Humbolt is based on the Thunderbolt. She was sunk near Marathon as part of the artificial reef program. I dove the area most weekends when I lived in south Florida. It seemed natural to make Hayden a Conch (generational native of the Keys) and set the story there.

You mention Hayden seeing a green flash at sunset. What exactly is it, and have you seen it?

As the sun dips into the sea, if the conditions are perfect, the horizon flashes green. The phenomenon lasts little more than a second. It’s magical, and I have been fortunate to see it. Traditional holds viewers will have luck for the rest of their life.

Hayden experiences severe migraine headaches—to such a degree she experiences blackouts and can’t recall things she’s done and places she’s been. It definitely adds suspense to the plot. Is there such a thing as migraine blackouts, where someone can do things and not recall them?

Migraines do cause blackouts in a small percentage of sufferers. Hayden’s blackout is a memory lapse caused by the all-encompassing pain of the migraine and is quite frightening.

Now that you’ve moved north, are you going to continue with the Florida setting, or have you been inspired to use a different setting?

The answer is both. There’s a saying in Florida that once you get sand in your shoes, you will always return. My shoes are exceptionally sandy! The first book in the Southernmost Secrets series, set in the Florida Keys, is drafted and has been submitted for consideration to Berkeley. I’m in the process of drafting a new series set at an artist’s colony and lodge in the northern Maine woods. One can do interesting things with a palette knife.

You also write the Catherine Swope mysteries. Please tell us about that series?

The Catherine Swope mysteries are responsible for my using a pen name. You see, I killed a lawyer in the first one and didn’t want anyone to wonder if life was imitating vicarious art!

The series is set in Miami-Dade County, Florida. Catherine is a former cop fighting her demons while she struggles to find her place in the world. Certain of her love of animals, she builds a dog walking service. When she finds a client dead, she becomes the prime suspect and must use her law enforcement knowledge to clear her name.

Which came first, your Hayden Kent mysteries or your Catherine Swope mysteries? How do they differ?

Oh, great question. Hayden came first. I wrote the book while participating in my first National Novel Writing Month (NANO). It was also my first winter in Maine. I was longing for blue water and soft breezes. The Swope series came after I returned to Florida and was inexplicably written in the Keys.

The Kent mysteries are traditional mysteries with a cozy edge. Hayden is a paralegal by profession and a reluctant amateur sleuth. The Swope series is darker. Catherine left the police force after a self-defense shooting of a teen. The shoot was justifiable, but she could not absolve herself. She’s a loner who prefers to spend her time with animals and only turns sleuth when other options fail.

Congratulations on your short story that was included in the Sisters in Crime Guppy Anthology, Hook, Line, and Sinker. Please tell us about it. 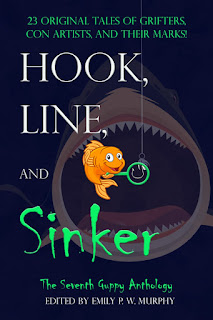 Thank you! It’s not often I get to write something where no one dies. “Gutted, Filleted, and Fried” was such fun to write. The story is about a marital con. We all like to think we know our partners and spouses, but do we really? I wanted to explore the consequences of a marriage where nothing is as it seems and then turn the tables.

In addition to writing mysteries, you’ve written some short pieces for some well-known and lesser-known publications. Please tell us about them.

Grace, are you referring to my checkered past as a writer for the True Confessions magazines? Yes, it’s true. I began as a romance writer. The Trues were a wonderful market, and magazine covers featuring my stories line my office walls. Alas, they are no longer in business. I’ve also written Woman’s World Five Minute Mysteries and non-fiction essays in Chicken Soup anthologies. My essay, “Blood is Thicker than Water,” appears in Chicken Soup for the Soul Lessons Learned from My Cat, which releases on Valentine’s Day.

While balancing home life and a grueling work schedule, you took a break from writing. What drew you back to writing again?

Writing is a labor of love. It’s the only profession I’ve ever wanted from the time I read Little Women.

Your series had been traditionally published, and now you are reissuing your books. Please tell us about going indie and the challenges this move presented?

We are so lucky to live in an age where publishing options are so diverse.

Re-releasing the Hayden Kent books as an indie made sense. It’s hard to find a traditional publisher to take on a pre-released series. The books were already edited. I was immensely fortunate to have the very talented Polly Iyer offer to do my covers. The stars aligned.

The challenges were knowing what the indie options were and the mechanics of making it happen. I purchased and devoured Mark Dawson’s Self-Publishing Formula class and the Atticus formatting program to help put the pieces together.

What advice would you give writers who are thinking about going indie?

Do your homework. This is your business. Invest in yourself. Your books will be your face to your readers. Be comfortable that they are as professional as you are.

Since you started writing, what has been the most valuable thing you’ve learned along the way?

You can’t edit a blank page. Set a writing schedule and stick to it. I confess, it’s a work in progress, but I do try.

What’s next after Death by Blue Water? Will we see more books in that series?

Oh, yes! I will be re-releasing Death by Sunken Treasure in the spring. A third book in the series, Death Dive, is drafted and on my editing schedule.

What are you working on now?

I’m turning my attention from the tropics to the Maine woods and am drafting the first of the Maine mysteries. I’m excited about sharing my love of this beautiful state. I’m also working on polishing and editing Death Dive. It’s fun to spend time with Hayden again.

Kait Carson writes two series set in the steamy tropical heat of Florida. The Catherine Swope series is set in greater Miami, and the Hayden Kent series is set in the Fabulous Florida Keys. A new series, the Maine Lodge mysteries, features Sassy Romano, a newly divorced thirty-something, who puts her past behind her when she inherits her family's Inn and artist retreat located deep in the Maine woods.

Like her protagonists, Kait is an accomplished SCUBA diver, hiker, and critter lover. She lives with her husband, four rescue cats and a flock of conures in the Crown of Maine, where long, dark, nights give birth to flights of fictional fantasies.

You can reach Kait and sign up for her newsletter at kait@kaitcarson.com

Congratulations on everything, Kait. have fun as an Indie publisher.

Thanks, Jim! I am having fun, but have a new respect for all that goes into bringing a book into the world!

Great interview! I'm so glad there will be more Hayden stories - so exciting! Wishing you the best of luck with it all. You are one busy writer and publisher!

Thanks, Shari - feast or famine. Of the two, feast wins hands down :)

Thanks for the kind words. Best of luck with your rerelease, Kait. Welcome to the club.

Thanks, Polly! Your covers are fabulous - truly captured the spirit of the book.

Fascinating! The book definitely belongs on my TBR list.

Thank you, Kait, for the fun and informative interview. And best wishes for the reissue of all your books.

Great interview, Grace and Kait. Kait, you sure have plenty of writing ahead of you to keep you occupied those cold and snowy winter days in Maine!

Thanks, KM, I hope you enjoy it!

Thank you Grace. Your questions were super and really made me think!

Great interview, Grace. Congratulations, Kait! P.S.: I love being an indie writer! Hope you enjoy it as well.

Thanks! Grace did a fabulous interview - it's easy to look good with questions that good.

I am liking being an indie - love the freedom - I may pick your brain as time goes on...

What a fabulous interview, Kait - I learned a lot more about you!