A Gift for Our Readers

Dear Readers, Do we have a surprise for you! Mark your calendars for February 1.

We’ve all played Story-Story. It’s an improv game that goes by many other titles, but the premise is similar. Players sit in a circle and each takes a turn creating a collaborative story, adding a bit to the part offered by the player ahead of them.

In 1931, the Detection Club played this game and the result was “The Floating Admiral.” The tale — with the delightful classic ingredients of a vicarage, an admiral, and a village gossip — was written by Golden Age luminaries Agatha Christie, Dorothy Sayers, Victor L. Whitechurch, G. D. H. Cole, Margaret Cole, Henry Wade, John Rhode, Milward Kennedy, Ronald Knox, Freeman Willis Crofts, Edgar Jepson, Clemence Dane, and Anthony Berkeley. Each wrote a chapter, G. K. Chesterton contributed a prologue, and Berkeley had the task of bringing it all together at the end. 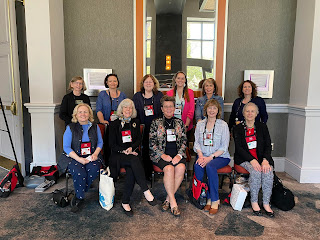 When several members of the Writers Who Kill blog gathered at Malice Domestic 32-33-34, Martha Reed and Rosalie Spielman floated the idea of writing a group story. Fourteen writer friends signed on to join Martha and Rosalie by writing one chapter each: Connie Berry, Sarah E. Burr, Shari Randall/Meri Allen, Warren Bull, Margaret S. Hamilton, Nancy Eady, Kait Carson, Marilyn Levinson/Allison Brook, Paula Gail Benson, E.B. Davis, KM Rockwood, Jim Jackson, Grace Topping, and Debra H. Goldstein. Martha and Rosalie then took the lead in organizing the project, and if you’ve ever had to organize a bunch of writers, you know what a herculean task that was. Connie kicked the project off with an intriguing first chapter, and Debra was our Berkeley, tying up the multiple nefarious strands of the story at the end. The strands were so nefarious that Connie circled back and wrote a brilliant and satisfying epilogue. As well as contributing a terrific chapter, Sarah E. Burr also designed a cover image to die for.

This experience was one of the most challenging writing exercises I’ve ever tried. Each author had one week to turn in their chapter. I watched eagerly as each chapter built on its predecessor. When my turn came, I had to consider the clues and events my co-writers had set in motion, integrate them into my chapter, and keep the forward momentum of the story – all in under 1,000 words. As the other chapters came in one week at a time, I was gripped by anticipation. What would happen next? I felt a kinship with all those Victorian age fans of Dickens, waiting on the docks to see if Little Nell had died. 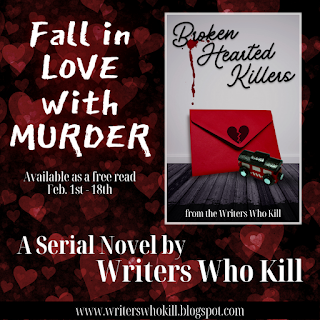 How to get the story to our readers? We took a page from Dickens and decided to serialize it. Broken Hearted Killers will run one chapter a day from February 1 to February 18 here on the Writers Who Kill blog. Think of it as our Valentine to you, our readers.

So, what’s the story about? Here’s a teaser:

It’s a neighborhood book club like any other, but those innocent readers’ faces mask desperation, obsession, and secrets some will kill to keep hidden. When murder turns the page, all the clues lead to…Broken Hearted Killers.

See you on February 1!

Shari Randall is the author of the Lobster Shack Mystery series and, as Meri Allen, the new Ice Cream Shop mystery series. Her latest is MINT CHOCOLATE MURDER. You can follow her on Facebook and Instagram.

A group story written by some of the best mystery writers in the business? I've definitely marked my calendar. Can't wait to dive in!

This was so much fun. I'm glad that I plucked up enough courage to participate.

This was a fun project - and a revelation into group and serial writing! I’m sure Martha and Rosalie must have had moments when they felt like they were herding cats, but they did a great job, as did all the authors and special kudos to Connie as our alpha and omega and Sarah as author and graphic artist! Looking forward to “release” day.

Can't wait to read this! Good for you, Grace, for plucking up the courage to participate. I was a total chicken. Next time?

Looking forward to the release! I am thrilled to have had an opportunity to participate; it was a fun adventure.

Next time for sure, Molly!

I’m delighted and proud to be part of this project. I blog with so many outstanding authors!