Something Else Not Improved by Technology by Nancy L. Eady

I have some work I want to do on my computer, but McAfee decided to disimprove my life by unilaterally deciding to re-enlist my account (after I specifically cancelled the last attempt at automatic enrollment). Then Microsoft decided to improve my life by announcing (another) update. So far, it’s been 20 minutes and the download has reached 33%. Even though I know I need my computer to be able to write, right now I’m tempted to throw everything out the window and find a pen and paper.

But because I can’t really afford to do that, and because it’s too rainy and cold outside to destroy my computer properly, I thought I’d share with you moments in my life that technology couldn’t improve.

Our adult daughter moved out in July. Two weeks before Thanksgiving, she returned permanently with one addition – a cat. We can’t keep a cat in the house because of my husband’s allergies and asthma, but we tolerated it for a few weeks because Kayla was fragile and couldn’t handle parting with her immediately. Finally we reached the point where it had to go, so my husband and Kayla worked out a compromise – the cat would be re-homed with my sister and we would get a puppy for Kayla. (For those of you worried about the cat, I am thrilled to report that Luna is doing very well, ecstatic at having the run of my sister’s house and making good friends with their other three cats.) Luna went to my sister’s the day before Christmas, so December 27th found me at the animal shelter with my daughter to see what they had that was adoptable. (Coincidentally, the 27th is my birthday). So, we acquired Max.


For the record, Max is the first dog that has ever entered our house that I did not ask for. The other eight over the years (the last two of which you met a couple of months ago in https://writerswhokill.blogspot.com/2022/08/something-not-improved-by-technology-by.html) I lobbied for hard, but Max is here solely because of my husband and Kayla. And that’s okay. He also is the youngest dog we have adopted, only three months old, since 1994, when we adopted J.P. Wooflesnort who was six weeks old. Unfortunately, Kayla miscalculated the effect he would have on her social life. And since her social life has not been curtailed, he is every bit as much our dog as hers now.


With two dogs in the house, life is never boring. With three dogs under the age of 4, life is nearly chaotic.

Fortunately, there are times when they run out of steam, and then life gets really, really cuddly.

When I look at the three of them, I am forced to admit, yet again, that there are things in life that technology cannot improve upon. And that’s the thought I’ll take with me into the week.

As well as the knowledge that I am very well loved. 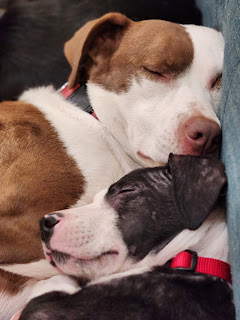 I have two standard poodles rough-housing in the living room as I type, anxious for their morning walk. Their schedule is OUR schedule. Louie is a pandemic puppy who learned to stick his nose into a zoom session to say "hi", which he continues to do. Enjoy!

More doggies, more love.
As for McAfee, I remember the problems I had with them years ago because an older version had gotten embedded and was causing problems. What an ordeal that was til they resolved the problem.

Sweet, sweet pictures. I often tell my husband, it's lucky puppies are cute, because they are a lot of work! (Like babies, now that I think of it...)
Hope your tech problems are solved!

And cats, while different, are equally loving and comforting.