Murder or Marry on Lindisfarne 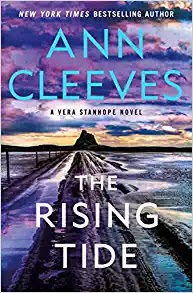 Lindisfarne, or Holy Island, is a small island off the northeast coast of England near the Scottish border. Once the medieval center of Celtic Christianity, ruins of a medieval priory and sixteenth-century castle remain on the island.

A narrow-paved causeway connects Lindisfarne to the mainland: three miles long, about a ten-minute drive, or a two-hour walk. It’s a beautiful hike across mud flats and then along the island’s coast. You cannot cross the causeway two hours before high tide or three hours afterward, when it is covered with sea water.

Years ago, when I visited Lindisfarne on a balmy June day, the sun sparkled on the water and the sea birds screeched and caterwauled overhead. My hiking companion insisted we linger on the island until near the two-hour-before-high tide mark, assuring me that we were in excellent physical shape, would walk quickly, and would make a safe crossing.

We didn’t. I eyed the wooden refuge hut on tall legs which stood next to the causeway, remembering that the tide rises inches within minutes and at high tide, the water would reach the top of an SUV or submerge a sedan. I stood alongside the road, watching the slowly moving traffic with pleading eyes and a quivering lip. Finally, a retired couple volunteered to give us a lift to the mainland. Once we introduced ourselves as clueless Americans, our driver assured us traffic was moving at a steady twenty-five mph and we had thirty minutes to make the short trip across the causeway.

Dear reader, I confess I married my fellow hiker a year later. And I still insist we check the tide tables before venturing into the water.

Ann Cleeves sets her latest Vera Stanhope mystery, The Rising Tide, on the Holy Island, at the northern end of Vera’s jurisdiction. Vera has visited Lindisfarne a few times in her life, though never in a professional capacity.

Minutes later she’d arrived at the causeway and the wedge shape of Holy Island was ahead of her. She didn’t have a spiritual bone in her body, but there was something about this place that moved her. It was history—St Cuthbert, St Bede and the dawn of British Christianity—and it seemed to sum up the importance of Northumberland in the world. Her county. Her home. (p.42)

With a small resident population, restricted access, and group of old school friends having a fiftieth reunion, Cleeves has all the components of an excellent mystery in place.

The schoolmates are in their mid-sixties, wistfully remembering their earlier romantic flings, disrupted marriages, and in one case, the death of a child. Cleeves employs her usual multiple close third person points of view with dexterity: we learn the history of a character, and soon view the character through another character’s eyes. Much is revealed, but hidden secrets remain, swept away by the rising tide and strong North Sea currents.

The plot centers on the death of one of the schoolmates during their reunion. However, Vera realizes that past actions and tragedies within the group drive present action. With her usual candor, Vera interviews and re-interviews the schoolmates, their families, and lovers. Vera separates the snarl of plot threads, puts herself and a team member at risk, and solves both past and present murders.

Vera is a bit younger than the schoolmates, but indulges in self-contemplation of her age and future in her current job:

It hit her suddenly that apart from Eliza, all the suspects in this case were ageing. Death was a reality to them in a way that it wasn’t for younger people, including Joe, for example, who sat across the desk from her now and was wittering about planning a holiday with his family. She supposed that older people made fewer plans. They had less time to fill, no endless possibilities stretching into the future. Could this be important for the way this case worked out? If so, as an older woman herself, she had no excuse for getting it wrong. (p.237)

In The Rising Tide, Ann Cleeves gives us a satisfying narrative of past and present crimes merging in a mystical setting. Her treatment of the schoolmates rises above the mundane to probe the emotional complexities of their complicated histories over the past fifty years. 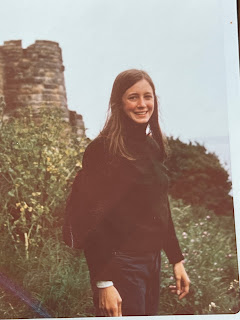 Ann Cleeves does a great job with atmosphere. I can only imagine how Lindisfarne will come across. A "must read" to add to my towering TBR pile!

I love your own romance story! And thanks for the review.

Love the review, but especially the last picture.

What a great review! Adding it to my list. (Love the picture!)

Kathleen, you would enjoy the settings and twisty plot.
Kaye, hiking brings out the best and worst in people.
Molly, weren't we the ones?
Lori, I hope you enjoy the book as much as I did.

I suspect you never have a dull moment in your marriage! Lovely review. This is a book I want to read.

Adding to the pile.

Kait, correct as always! His idea to take the hot air balloon ride in Luxor, Egypt.