Sometimes you need to let go of "not letting go"

Grab those opportunities and don’t LEGO! – by Rosalie Spielman 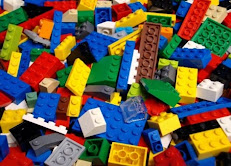 I originally wrote this last year as a guest blog for Kara Lee Miller's Spill the Tea Tuesday, comparing a writing career to building with LEGO blocks. But I have since learned that not letting go has an opposite—letting go—that needs to be remembered as well. I'll share some of that blog as it originally appeared, in italics.

Building a writing career is not unlike building with LEGOs. Everyone builds a little different, some faster than others, some use different methods and are more or less organized than others, and some might have to restart to make their structure work. But everyone has to put the work in, piece by piece, and build it up over time.

In 2019, I started querying a cozy mystery. During my research, I was introduced to the mystery writers' organization, Sisters in Crime (SinC), and joined the national and local chapters. They are a great organization that has provided a plethora of learning and networking opportunities, and joining ended up being my first step toward publication. In the Lego metaphor, it has been a base plate that provides my structure support.

As a SinC Chesapeake Chapter member, I received an email about anthology submissions. Had I ever written a short story? No, not really. But I had an idea for a story, so I decided to try it. Grabbing this opportunity ended up being my next building block.

I went on to discuss how my short story was accepted, which indirectly led to my agent and my first book contract, stacking up more of those LEGO blocks. I ended up with contracts for a total of five books to be written and turned in less than a year after my first release, Death Under the Sea, in November 2021.

And, unfortunately, the volume of work has proven to be too much, especially when you add in the editing, publicity for book releases and everyday publicity (aka website, newsletter, social media), writing and editing two short stories, a blog, and, hanging over all of it, the self-induced pressure of writing new proposals for future series and work. I thought I had taken everything I needed to into consideration, wanting to strike while the iron was hot, but didn't take into account anything that didn't fall into the above categories. Like life, especially the being a mother, daughter, and wife aspects.

The final nail in the writer stress-coffin was a real-life event that made writing about murder not so fun. Four students at my son's university were brutally and senselessly murdered the week before Thanksgiving. I arrived mere days after the murders for the holiday with my family and some organized events at the local libraries, but cancelled the public events by mutual agreement. Talking about fictionalized murder in my hometown when there were real ones there was too unsettling. Seeing how the murders affected the community and the kids at the university was a stark reminder that what we do is fiction. And blessedly so.

The police (the small-town force augmented by state and FBI) went seven weeks without a suspect, recently arresting a man in Pennsylvania for the murders. But in those seven weeks it became really, really hard to write about murder and even harder to write a funny book that involves murder. My heart-feelings moved to my head and made it near impossible to write at all. My pen was paralyzed.

It was time to rebuild my LEGO block structure a little, and let go.

A few days before Christmas, I finally emailed my publisher and agent about my writing problem and changing my remaining two deadlines. (At this point I had a non-existent 75K book due to the editor in 70 days.) They were both incredibly kind and understanding. My deadlines are now living, breathing-lines, which lessen the stress an enormous amount. We left the February release of my next Hometown book in place since everything was already done for it, but have pushed back my already-written third Aloha Lagoon to Fall 2023.

In addition to blurring the outstanding deadlines, I contacted people about some of the "extras." I felt like a child busting their LEGO blocks creation, with an immense amount of disappointment in myself. But I have slowly come to accept that sometimes the best thing for us is to let go. The result of that was to opt to pass on a short story that I had been invited to write for a collection, and I have decided to leave the Writers Who Kill blog.

I am perhaps losing some opportunities and pushing my career map back a little with all these decisions. But I needed to let go of some things in order to focus on the more important things—not just my established contracts, but my health, and that of my family.

I've enjoyed my time at Writers Who Kill and the door is left ajar should I ever feel like returning. (Thank you, Elaine, for your understanding.) It's been wonderful to meet and work with all these amazing writers, and I am grateful to Korina Moss for suggesting me to the group. And a special thank you to the readers who read our words each month.

I'll end my blog with its original ending:

No matter what your end goal, keep working away. I’m no expert, I’m just getting started, and not even sure what my LEGO creation will look like in the end! But advice – if you’re a mystery writer, join SinC. And regardless of your genre, build up your resume. Try your hand at short stories, flash fiction contests, or whatever other opportunities come your way. Just keep building!

Authors, have you ever come up against this problem, where reality makes it hard to stomach writing mystery fiction? Readers, does the real world ever interfere with your reading?

If anyone wants to keep tabs on me, the best way is via my website www.Rosalie-Spielman-author.com or on my Facebook page (Rosalie Spielman author) and group (You Know The Spiel).


Posted by Rosalie Spielman at 8:00 AM

So well said. Sending good thoughts your way, and hope you'll be back when you're ready!

Oh, Rose, so sorry to lose you and hope you will be returning soon!

You're a wonderful writer, Rose, and I love the way you think things through. I hope you rejoin us down the road a piece.

Take the time you need and then come back!