I worked my way through the crowd to the bar and ordered a drink.

I didn’t believe in going into a place and not ordering anything.

It was almost as bad as leaving a library without a book.

The Florida Panhandle Barback Games are coming up and Chloe’s been drafted to represent the Sea Glass Saloon—competing in various obstacle-course events that conclude with rolling an empty keg up a hill. The rivalries are so fierce that some of the participating bars even stoop to bringing in ringers.

Meanwhile, Chloe’s friend Ann—a descendant of the famed pirate Jean Lafitte—asks her to come along for a boat ride as Ann dives into the Gulf of Mexico. She’s found some old papers that may identify the location of sunken treasure. Instead, she finds a sunken body—of one of the ringers hired for the Barback Games.  Now that murder is in the mix, Chloe has to figure out whether one of the competitors went overboard . . . 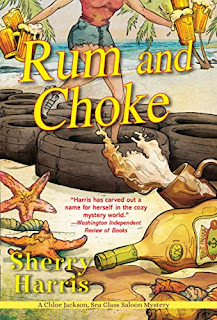 Rum and Choke is the fourth book in the Chloe Jackson Sea Glass Saloon mystery series by Sherry Harris. Just like writing those stagnant middle chapters, books mid-series can be fraught by few character arcs and not enough series arc. Not to worry with this book. Sherry reveals Chloe and Ann’s characters in surprising ways. Ann is less of a mystery and a much more vulnerable. Chloe is bolder and braver than we’ve ever seen her before. This was a fun read and the book surprised me with its candor and insight.

However, what I learned about electronic security was enough to make anyone paranoid. Radio waves and modems are too easy to use by criminals. Replicating key fobs?

Thanks so much for having me back to talk about Rum and Choke!

I never heard the term Barback before. Is this a common term in the bar industry? What does it mean? Do restaurants have Barbacks as well or just bars? It is a common term. Barbacks work hard in the background making sure the bartender has everything they need to make a great drink. They carry heavy boxes full of glasses or alcohol. They clean and cut fruit and restock items. I’m not sure if restaurants have them or not.

There’s a yearly competition among the various Panhandle bars. Are the competitions real? What events do Barbacks compete in? When I first came up with the idea, I did a search online and yes there are competitions for barbacks. I made up most of my events but there is a race through tires although it’s different than the one in my books. I have the barbacks fixing drinks with mystery ingredients, running through tires with steins full of beer, and pushing an empty keg up a hill among other events.

Is winning the competition good PR? Why is it so competitive, enough so that ringers are brought in? People love winning competitions. I’m not sure if it’s bragging rights or just human nature. It’s funny that I didn’t think of this when I was writing the book, but your question made me think of an old Cheers episode. Cheers is playing Gary’s Olde Town Tavern in a three-on-three basketball game. Gary’s brings in ringers so Cheers gets a Boston Celtics player to come.

When Chloe goes to the other bars to check out the competition, she drinks Bushwackers. What are they, and why did she choose them to drink? A Bushwacker is like a milkshake for adults. Chloe thinks the milk/cream in them will coat her stomach so she doesn’t get tipsy. 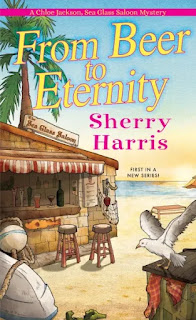 Is a Panhandle, Florida accent unique or just Southern? The part of the Panhandle where the book is set is right below Alabama. The area is not only called the Emerald Coast, but often called LA or Lower Alabama. So the accent is mostly like an Alabama accent.

Everyone suspects Chloe’s drinks were drugged. Is there really a coaster that can be used to discover drugs in drinks? There really are. There are also straws and fingernail polish that will change color if certain drugs are present.

Ann is related to the pirate and war hero John Lafitte. How could he be both a pirate and a war hero? Which war? While John Lafitte wasn’t a good guy, he did help fight the British during the War of 1812. After the war President Madison pardoned him for the smuggling charges against him.

Ann asks Chloe to accompany her while she dives. How has Chloe demonstrated to Ann that she is trustworthy? This is such an interesting question. Over the series Ann has had a chance to help Chloe out and observe her interactions with people. Ann realizes that people talk to Chloe a lot and that Chloe doesn’t gossip.

Is the Shipwreck Trail real? Yes. Some of the wrecks are vessels that have deliberately been sunk to make reefs for divers. However, there are over 600 shipwrecks in the Northern Gulf. Some sources say even more—up to 2000.

Back home in New Orleans, Ann finds an old treasure map of John Lafitte. She dives to find the treasure, but instead comes up with a Barback competitor’s body. Ann doesn’t want anyone to know about the treasure. Why does Chloe decide to omit the truth for Ann? Ann has helped Chloe out of sticky situations several times in the past so Chloe decides to return the favor. Chloe initially believes that keeping this secret won’t impact the search for the murderer. She does tell Ann that she will tell if it becomes necessary to find the killer.

Do you have any good Brussel sprout recipes? My favorite way to prepare Brussel sprouts is to trim them, toss them in a bowl with olive oil, salt, and pepper, and roast them in a 400-degree oven for about 40 minutes until they are lightly browned. They also are good on the grill.

Why does a life change entail a hair change in Chloe? It’s just one of her quirks. She wants to feel differently physically and mentally.

What is a Faraday Bag? Faraday bags block EMF signals. If you keep your electronic car keys in one, no one can clone your car keys. It’s the modern way to steal cars. Some people also keep phones and computers in them. 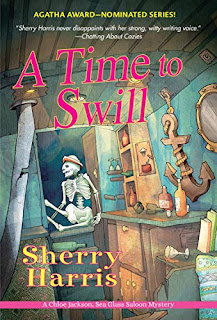 Chloe reveals that Ann is a bit naïve when it comes to technology and relatives. I’m surprised. Why isn’t Ann more savvy in both? Ann is a badass in most things. She’s smart and resourceful, but like all good characters she has flaws and those are two of hers.

What’s an angel martini and how does it work? There are all kinds of angel drinks. They signal to the bartender that the person ordering it feels unsafe for some reason and needs help.

What are beanbag rounds? Police use them sometimes because they are less lethal than bullets. They are lead shotgun pellets in small cloth bags. The intent is to stop the criminal but not kill them. However, they can cause serious injury and even death.

An average tire is twelve and a half inches? Do you mean the open center’s diameter is that size? Yes!

When they decide to hire more help, Chloe keeps finding better jobs for the applicants. Why? It’s a good way to show an aspect of Chloe’s personality. She’s kind and has a tender heart, but I don’t have to say that, I can show it through her interactions with the job applicants. Chloe realizes most of the applicants really need a job, but they aren’t right for the position at the Sea Glass Saloon. She decides to help them out by asking what they love to do and being that it’s a small town, it’s easy to find jobs for some of them.

Battle ready for women means putting on a whole lot of makeup. Do you think most women feel like that? I think that when you feel good about yourself you are battle ready. It could be makeup. It could be clothes, or it could be a mindset. On one particular day, Chloe decides more makeup and well-styled hair will make her feel more confident as she has to face down Deputy Biffle.

What drink would Joaquin make to pair with this book? A Buried Treasure cocktail!

Pear, gorgonzola, walnut, and prosciutto pizza? Are you kidding? It is so delicious! You can substitute figs for pears and that’s delicious too. 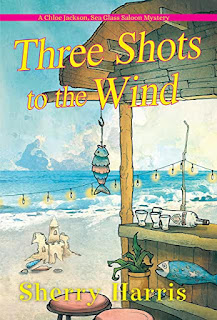 I love Sherry's books! I'm looking forward to this one.

Congratulations on your most recent publication, Sherry. Wishing you and it all the best.

Congratulations on your latest!

I'm a fan of Sherry's books and this one sounds terrific! I'm getting it on my Kindle now. Congratulations, Sherry! Your characters always have so much heart and that's why we love them.

Thanks, Lori! Thank you Shari -- I feel same way about your characters!

Love the titles, the covers, most of all the stories . . . Thanks for writing them Sherry!

That is such a lovely comment coming from you, Molly -- an author who is an example to all of us!