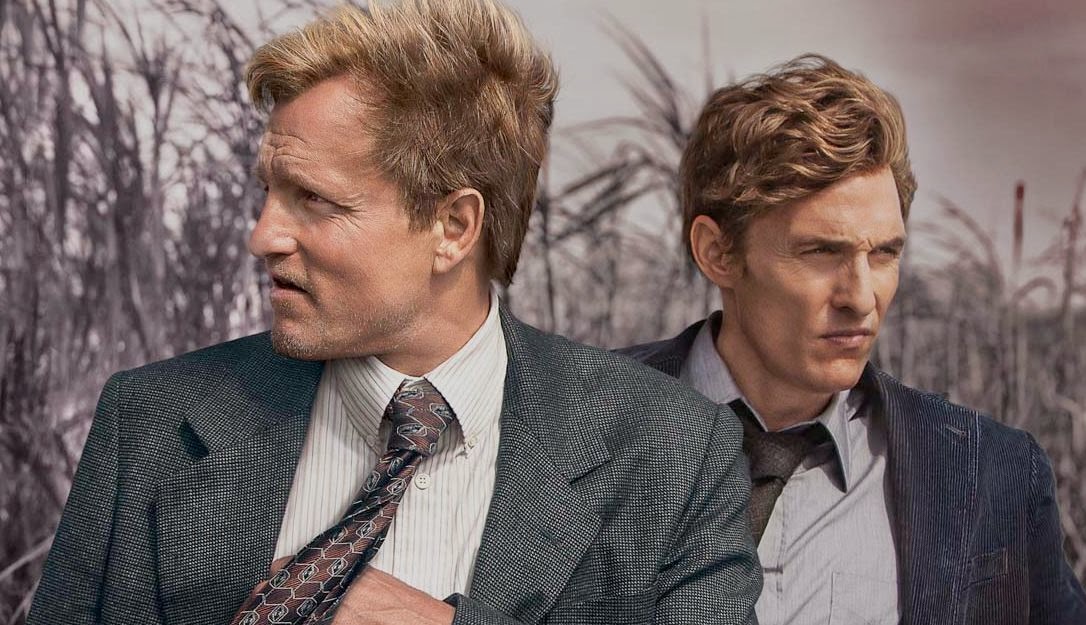 Last week on Writers Who Kill, Linda Rodriguez happened to post about all the fabulous things writers can learn from watching (or reading) George R.R. Martin’s Game of Thrones. If you haven’t checked out her blog, do so, it’s awesome.

I wanted to expand on this theme because I, too, have taken away quite a bit from that show and those books (as mentioned briefly back in June with a big, fat picture of Kit Harington’s Jon Snow), but this time, I wanted to discuss another show that has a heaping amount of little gold writer nuggets scattered within its weekly hour: True Detective.

Honestly, I barely watch TV. If it’s not a sport or The Daily Show, I probably won’t have time for it. I have made time for Game of Thrones and House of Cards, but mostly because we don’t feel beholden to watching them at any certain time. With a five-year-old and a 4:15 weekday wake-up call, I’m only good for an hour of TV and usually on a Friday or Saturday night when I can “sleep in” until some amazingly late hour like 6:30.

So, when True Detective launched earlier this year, I didn’t bother. I mean, I knew about it. But I know about a lot of shows I’d like to watch but can’t totally commit time to sitting down and enjoying.
But then the messages started coming in from friends.

Have you seen True Detective? Totally thought of you.

And I’m increasingly happy I have.

While not based on a book, (though there are tons of references to 1895’s The King in Yellow) this show has two huge teach-by-example lessons for writers: A. Building Characters and B. Narrative Structure.
Okay, there are probably many more lessons to be learned here, but these are the two I’m picking. Because they are major, clear cut, and immensely helpful.

Building Characters: The show centers around a long-time Louisiana state detective named Hart (Woody Harrelson) and his brand new partner Cohle (Matthew McConaughey). The guys pair up just in time to chase down a possible serial killer who has murdered at least one woman and left her on display in a way that’s about as creepy as you can get (it involves antlers).

But the crime doesn’t dominate the series. The characterization of Hart and Cohle is most definitely the center of attention. We learn bits and pieces about them in eyedropper helpings. It’s intoxicating and interesting because, as a viewer, you are always waiting for that next bit of information to drop, especially about the very broken, unusual Cohle.

As a writer, this is fabulous to watch and absorb because we all know that the “info dump” is basically the death of a good scene. Especially when the dumping involves characterization. As writers, it’s so important to let the reader learn just enough early on to become invested rather than overwhelmed, and then feed them with bits of information as the story progresses. Seeing this done so masterfully on screen is most definitely helpful when sitting down to write (or revise the info dump away).

Narrative Structure: The second big lesson here is on structure. True Detective doesn’t take place linearly. Rather, it effectively sets up the past and present in a sort of cat-and-mouse situation where both inform each other. The original crime took place in 1995, but in the present, both Cohle and Hart are being interviewed by detectives about that case. As with many interviews, neither man is telling the whole truth, but here, the viewer understands what really happened and what they aren’t saying. This creates a fabulous element of dramatic irony—we know quite a bit that the detectives in the interview room don’t know—and that’s a ton of fun.

As writers, this is important because we can see tension being built between the past and present. Even if you use a more traditional, linear structure, it’s easy to watch the brilliant writing here and realize how past actions must affect the outcome, even if they aren’t directly related to the main plot thread. And in mystery, the past probably means everything, no?

What TV shows have you learned from as a writer? (And don’t say Murder She Wrote!)

Note: Warren Bull has also written about TV shows and writing in the WWK space, most notably on Burn Notice and The Closer.
Posted by Sarah Henning at 12:00 AM

Law and Order provided an advanced degree in scene changes: in seconds they defined the scene, who the players were, and where we were in the storyline (i.e. what was skipped).

I haven't had time to watch TV since Magnum PI and the Rockford Files, but in each of those series, the main characters had side kicks who provided comedic moments that greased the plot, entertained, and enhanced the main characters, bringing out their strong and weak traits. That is a valuable lesson.

Oh, no, I feel a tv show addiction coming on. True Detective sounds sooo good! Very Twin Peaks.
I don't watch too much television - my schedule is too erratic, so I tend more to movies.
I am a huge fan of nonlinear narrative structure (Pulp Fiction) and a slow burn buildup of suspense. The first Alien movie was so much more terrifying than the ones that followed. Story tellers who let us construct our own nightmares from their cunningly revealed clues are a lot more powerful than the ones that hit us over the head with their own fully rendered CGI monsters.
And, hey, no talking smack about Jessica Fletcher. She and I go way back!

Jim makes a good point about how quickly today's programs move. A few months ago, I watched an episode from a 1970s show. The opening took about three minutes with the lead character just walking through an area, setting up the location and rolling the credits. People expect action almost immediately now. It's a good lesson for short story writers in how to use description. Both Law and Order SVU and Criminal Minds have taught me a great deal about developing continuing characters and building an ensemble.

I don't have cable TV, because I watch so little TV. I still have an old antenna which works quite well for my local PBS station. The shows I do watch on PBS are almost all mysteries, except for Downton Abby. Thursday nights on my local PBS has a marathon of mysteries right now - three in a row, and I'm really enjoying them. I love mysteries where I can figure out the murderer before he/she is actually caught. I just found out and was saddened by the fact that DI Richard Poole will be murdered in the first episode of Death in Paradise when it returns later this month in season three. However, the description of the new DI sounds like he will be a good character, too.

All forms of story telling can provide lessons about writing. I have heard wonderful things about True Detective.

I don't watch a lot of TV. Every once in a while I will catch a "reality show" like Cops, and I was on a tour with an editor for 48 Hours. After she described a lot of the things tha went into making the show, it seemed a lot more interesting, so I catch that if I notice it's gong to be on (which doesn't happen much since I don't watch much TV.)

I probably should branch out a bit more, but I do worry about presenting inaccuracies in my writing because "that's the way they do it on TV."