Today's Salad Bowl Saturday Guest is Nancy Lynn Jarvis. When I started reading her post I was brought back to my high school creative writing class where I wrote a satire on the Vietnam war comparing it to the Britains fighting against Rome--which has nothing to do with Nancy's post, except we both use the phrase "Great Caesar's Ghost"--Nancy much more effectively than I.

So please welcome Nancy and her ghosts.

Regan is a Realtor who, like me (a twenty-five year veteran of the real estate business) and many Realtors I know, has had the experience of walking into a house and having the hair stand up on the back of her neck . She knows what it’s like to be hit by a wave of cold and experience an overwhelming sensation of evil when previewing a house.

Even so, like me, she clearly states that she doesn’t believe in ghosts, not when there might be a rational explanation for what seems like a spectral presence. Initially Regan is convinced the only thing that might cause a house to be haunted is its past reputation; by the end of the book she discovers the truth is more complicated. 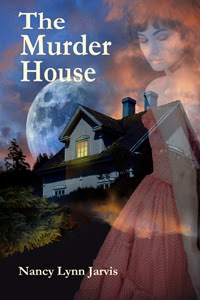 Every community seems to have a real Murder House, a property with a history of murder and mayhem rumored to be home to ghosts. There are real estate professionals who deal exclusively in stigmatized properties, websites where such properties are listed for sale, and a contingent of buyers eager to own properties that come with eerie houseguests.

While writing The Murder House, I started asking people if they believed in ghosts. The replies I heard were fascinating. Believer or skeptic, almost everyone reported having had some sort of interaction with what they called a ghost or a presence.

I’ve had my own experiences with “something.” The first was seeing a blue ball of light moving rapidly through the woods outside The Wayside Inn in Massachusetts. It wasn’t until I read the pamphlet they distributed describing ghost sightings at the Inn that I discovered my blue glowing globe was one of the alleged ghosts spotted by many visitors.

Years ago when I was the fourth owner of a house where deceased husbands and fathers had left widows and orphans, my then six-year-old son and his friend talked about Georgie, the ghost in their play space in the attic. I assumed they were influenced by Robert Bright’s children’s book Georgie the Ghost, which I had recently read to them. I thought no more of Georgie until I was selling the house and the home inspector warned me that he discovered some frayed and sparking electrical wires touching flammable material in the attic.

He said by rights the wires should have started a fire and credited the mustachioed man he had seen there out of the corner of his eye  — who he dubbed our fire-preventing guardian spirit —  with keeping my children and me safe. I was intrigued and couldn’t resist asking my then grown son if he remembered Georgie. “You mean the guy with the big mustache who lives in the attic?” he asked.

I used the blue ball of light in The Murder House and used my favorite ghost story in the book’s dedication. You can read it if you like by going to Amazon and using the “look inside” tool on the book’s page.

Nancy Lynn Jarvis thinks you should try something new every few years. Writing is her newest adventure and she’s been having so much fun doing it that she’s finally acknowledged she’ll never sell another house. She let her license lapse in May of 2013, after her twenty-fifth anniversary in real estate.

After earning a BA in behavioral science from San Jose State University, she worked in the advertising department of the San Jose Mercury News. A move to Santa Cruz meant a new job as a librarian and later a stint as the business manager for Shakespeare Santa Cruz at UCSC.

She invites you to take a peek into the real estate world through the stories that form the backdrop of her Regan McHenry mysteries. Real estate details and ideas come from Nancy’s own experiences.
Posted by Jim Jackson at 12:00 AM

Wouldn't it be great to understand the reality of stories like your house ghost? In the meantime, all we can do is speculate and write good stories.

Thanks for joining us today nancy.

I like it that you use your background to make your books more realistic. Thanks for sharing on WWK.

Okay, Nancy, I'll be downloading your books on Kindle soon. Your blog describes those books I like to read. Of course, it also describes the books I like to write, except that my ghost turns into an angel and, along with my MC, fights a demon. What are the titles of your books in order? I don't like to read out of series order if I can help it. Yes, and I've had ghostly experiences, too. Thanks!

Nancy, I've had experiences, too, but when the former owner of my house made his presence known to others in my family, none of us felt fear as much as a puzzled feeling of what's causing those footsteps upstairs, who is that talking? Or in the case of my daughter, a spooky feeling when a white shape appeared at the bottom of our steps. Chick is long gone, and no longer occupies my house with me. I was never afraid.

In a house we lived in for a few years, one of my daughters had an "angel" she talked to, which we figured was an imaginary friend. We rethought that years letter when the house showed up in a book called "Haunted Houses of Michigan."

I think there's a lot out there no one understands.

Your books sound like a great exploration of this phenomena, and what a good way to make use of your real estate background.

Thanks Jim and the gang for having me on your blog today. EB, the books in order are: The Death Contingency, Backyard Bones, Buying Murder and The Widow's Walk League. The Murder House is the only one with possible ghosts.

If you read in order, bear with me for the first half of The Death Contingency. I'm a better writer now. You'll see me learning.