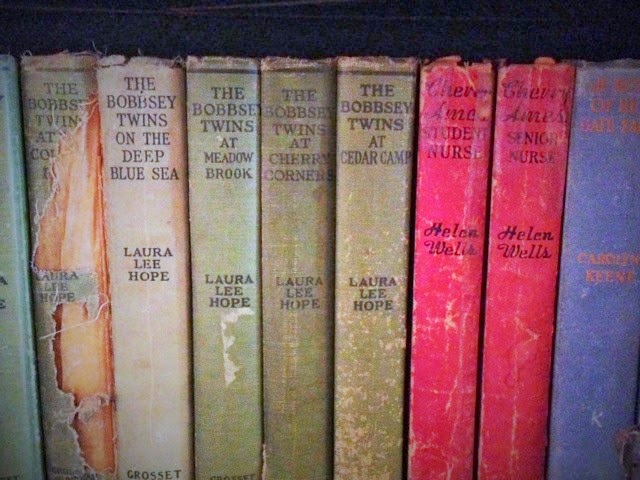 There's something magical about an antique book. It’s both delicate—perhaps with a torn linen cover and yellowing pages—and strong because it has survived to tell its tale. However, the musty smell is what makes me smile. It brings back happy memories of sitting in the library stacks at college paging though tomes of old books, or shopping in a secondhand book store.


In 2009, a study was conducted on the smell of old books. A scientist decided to investigate after noticing a book expert sniffing a book to assess its age.


"The aroma of an old book is familiar to every user of a traditional library," he wrote. "A combination of grassy notes with a tang of acids and a hint of vanilla over an underlying mustiness, this unmistakable smell is as much part of the book as its contents." The study found that as a book ages, the paper, ink and glue break down, releasing hundreds of volatile organic compounds into the air which creates the familiar old book scent.


Of our five senses (sight, hearing, taste, touch and smell), the sense of smell is the most powerful. Researchers estimate that humans can distinguish one trillion different odors. (Probably not true for allergy sufferers.) Also, smell more than any other sense is linked to parts of the brain that process emotion, including mood and memory.


I once took part in a focus group about butter. The advertising firm studied this group to help decide which print and television campaigns to use in order to effectively market a particular brand of butter. The market researchers first asked our group if we liked butter and if the smell reminded us of childhood. A participant said it reminded her of her mother. Then they asked if she liked her mother. The answer was, “yes.” I believe the resulting television commercial was of a mother bringing butter to her children at the breakfast table.


The Oscar Mayer Company, famous for meat and cold cuts, understands the power of scent. They recently created an iPhone app that wakes you up to the sound and smell (with an additional plug-in fan) of bacon frying in a skillet. (Bacon lovers you can embrace the sizzle and apply to be a beta tester.)
So, if smell is our strongest sense, should we write descriptions of how things smell more frequently than, for instance, how something looks or tastes? I don’t know the answer, but I will add more descriptions of aromas in the future.


In addition to that old book smell, I love how the desert smells of creosote after a hard rain. It reminds me of my childhood spent in the sunny Southwest.


Do you have a favorite scent?
Posted by Kara Cerise at 12:00 AM

Gosh Kara, but you are so right about the power of a scent (and did Coco Chanel make a fortune off of that concept or what?)

Favorite smells? I have too many, but here are a few: a freshly cut hay field; my Michigan woods after a spring rain; rubbing a twig of yellow birch between my fingers and (I can hear the groans, but for me it's true) freshly laid asphalt from a bit of a distance.

I forget about smells, and that's what's always fresh about odor. You don't expect smells. Whenever I smell something unusual, I'm always surprised by the immediate association to a time or place. I remember the particular odor of my grandmother's house, or opening the door of my parents house and knowing a certain person visited by their scent.

Old books? No thanks. Dust, dust mites and mold. My favorite smells? All kinds of homemade food cooking like baked bread, brownies or cookies!

Hmmm....gardenia, pink grapefruit, pine....must admit that the smell of old books is not one of my favorites. However, the smell of new books is a different story!

I associate the smell of baking bread with my beloved grandmother.

That ozone smell right before a summer thunderstorm in the Midwest is a big favorite of mine. The smell of a bookstore or office supply store. Freshly baked cookies. Arroz con pollo simmering on the stove.

Coco Chanel was an astute businesswoman who made a fortune from the power of scent, Jim. Unfortunately, she took over the company during World War II from its owners who were Jewish and she may have been a Nazi spy. There was quite a legal battle over the company after the war.

The smell of freshly cut hay and of the woods after the rain are wonderful smells, but I never found asphalt appealing. I'll have to take a deep breath next time the road crew is filling potholes.

E.B., I love the smell of cookies and brownies baking. It's a nice way to warm the house when it's cold and snowing. (Will this winter ever end?)

My favorites are baking bread (I make most of our bread,) turkey roasting on Thanksgiving morning, peonies from my garden, a light scent of mothballs (reminds me of my great grandmother's house,) freshly mown grass or hay, wood smoke on a chilly afternoon, a clean barn filled with contented horses munching hay, newborn babies (assuming they don't need a diaper change.).

There must be lots more.

I don't use scents as often as I probably should in my fiction, but a few distinctive ones come to mind: the scent of hot steel and oil in a welding operation; the odor given off by molten glass as it streams from the forehearth to the fiberglass spinners; the strong disinfectant, concrete and steel smells of a well-run prison or jail; and the disinfectant mingled with urine and unwashed bodies in a more poorly run one or one under several days lockdown.

How nice that you think of your grandmother when you smell bread baking, Warren. I associate the smell of roses with my mother.

Linda, thinking about the smell of arroz con pollo cooking on the stove makes my mouth water!

Kara, you're right. Smells always evoke strong reactions, whether from pleasant or unpleasant memories. I can understand why food scented candles are so popular. If one sense (smell) is satisfied, another (taste) can deal with a little denial!

KM, I like your description of smells in a well-run jail versus a poorly run one. You make a good point that smell is one way to emphasize the difference between two places.

I find it difficult to describe some specific scents like a dental office. It has a very distinct odor, but I can only describe it in general terms as a metallic/medicine smell. Or, maybe writing that something smelled like a dental office is enough since most people are familiar with that scent.

Those are beautiful scents, Gloria. Each one on your list brought back a memory. Leather saddles reminded me of a family who lived across the street when I was very young. They owned gorgeous Appaloosas. The father on horseback and his daughter, who sat in front of him in the saddle, stopped by my house most mornings. My mom would hoist me in the front of my friend and the three of us would ride down the street on the horse. Sometimes my friend and I would still be dressed in our pajamas. I haven’t thought about that in years.

Paula, I have a friend on a diet who said she doesn’t need to eat sweets as long as she can smell them. She’ll take a deep whiff of a cookie and hold her breath for a few seconds. The smell alone satisfies her cravings for sweets.

Love this! Especially because right now I'm stuffed up and can't smell a thing. That said, my favorite smells have to be bread baking and chocolate. Neither is low-calorie, but delicious!

Sarah, I hope your stuffy nose gets unclogged soon so you can enjoy the wonderful aromas of chocolate and bread baking.