An Interview with Shelley Costa 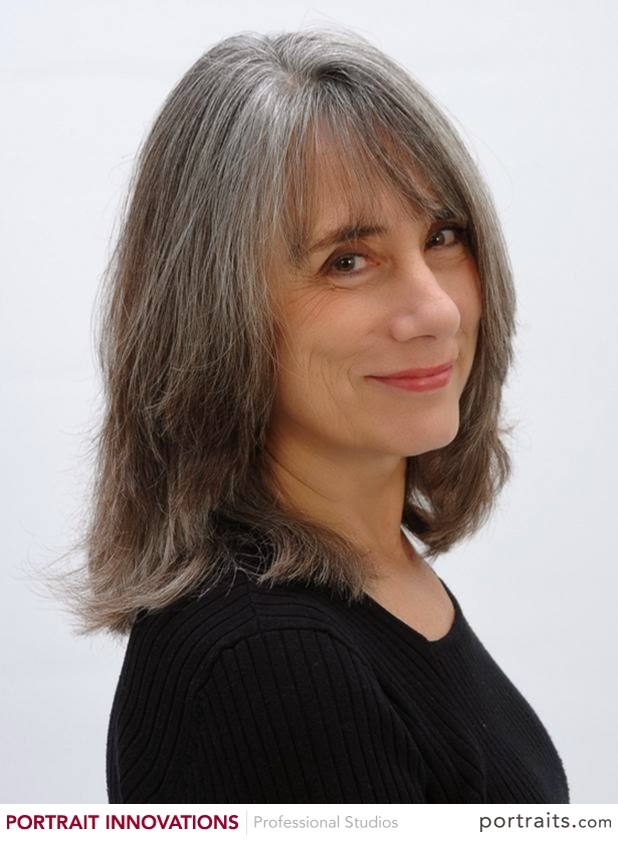 Shelley Costa is our guest today on WWK. I’ve known Shelley for four years now when she and several other Cleveland mystery writers formed a group to discuss mysteries over a meal at a restaurant. I was one of those at that first meeting. Eventually, we formed NEO Sinc, a chapter of Sisters in Crime. Shelley’s first book in a new mystery series, You Cannoli Die Once published by Simon and Schuster, is up for an Agatha for best first novel this year.

Tell us a little about yourself and what led you to writing.

My nature led me to write from the time I could put a pencil to paper and string words together – age five; first story, “Nancy Ann the Duck.” First mystery; The Return of the Doctor” came at age 10, and I went through many, many years of writing literary fiction. But, even despite graduate work in literature, I have always been most stirred by, most drawn to mystery. So I turned to writing it exclusively. There I can explore those delicious circumstances that lead to terrible crimes. Aside from my work, I’ve got a husband and three grown daughters – all of whom leave the mystery writing to me.

On your website you write what you look for in mysteries you like to read and what you include in your writing. Give us the three elements that are important to you.

a.      Closely written characters. I like to read mystery writers who keep peeling the onion on human nature. And I need to care about the sleuth.
b.      A believable plot where Things Matter. I don’t care for thrillers where fancy weapons resolve everything or where heroics seem preposterous.
c.       Gorgeous prose. A beautiful voice. Humor.

I thoroughly enjoyed You Cannoli Die Once and the characters. Give us a book cover blurb of what the book is about. 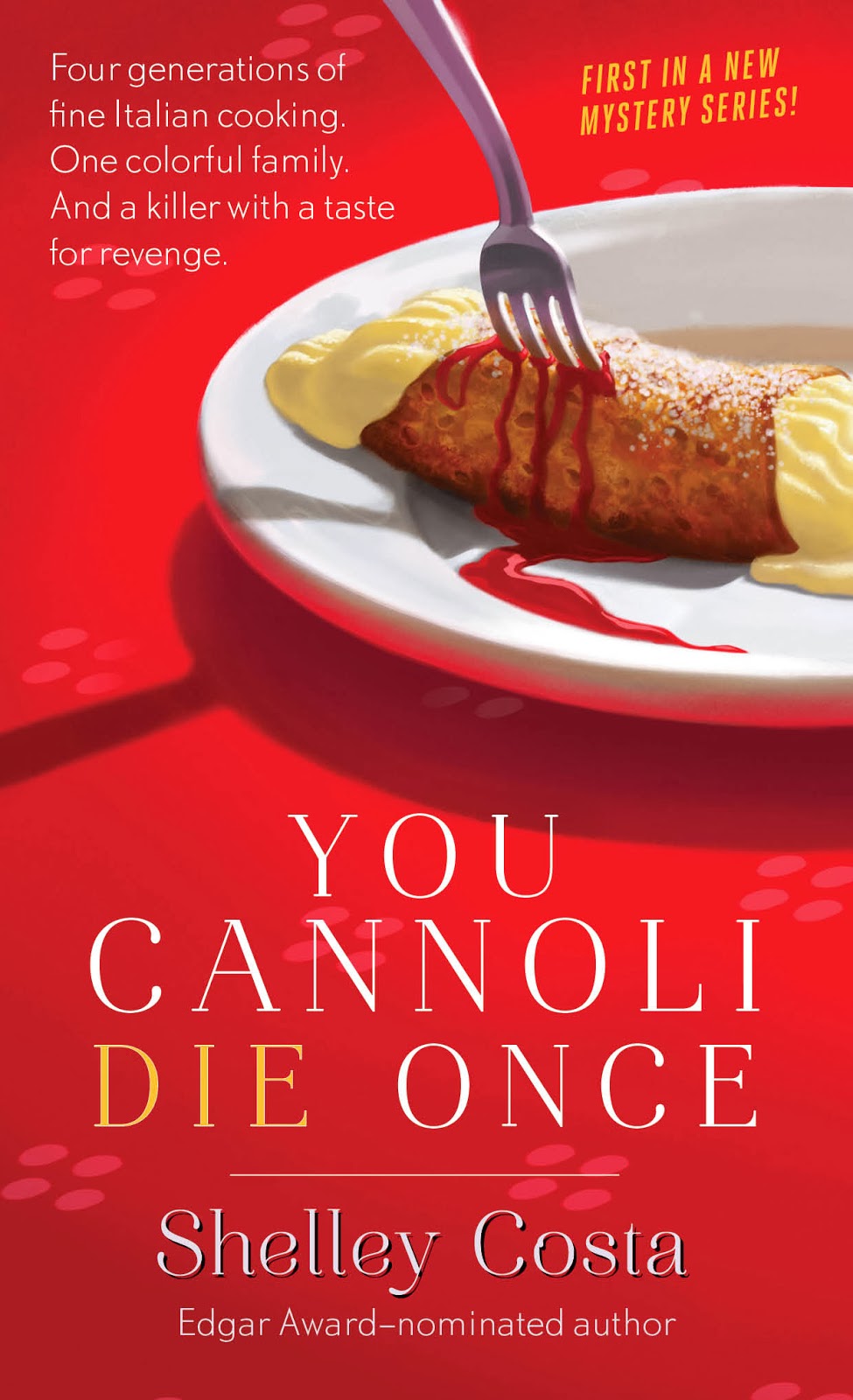 Thanks, Gloria! You Cannoli Die Once features Eve Angelotta, head chef at her family-owned Italian restaurant – strictly northern Italian cuisine! – outside Philadelphia.  Eve knows how to handle her seventy-six year old nonna (Italian for grandmother), Maria Pia, the colorful and demanding matriarch who owns the place. But when Maria Pia’s boyfriend is found in the restaurant kitchen, bludgeoned by a marble mortar, it isn’t long before the police arrest Eve’s nonna for the crime.  At which point the entire staff of the restaurant get busy with something other than veal: to free Maria Pia, they try every trick in the cookbook to unravel a tangle of lies and expose a killer.

How or why did you choose and Italian restaurant in a small Pennsylvania town for your setting?

I grew up in New Jersey and remember visiting a charming old town north of Philadelphia by forty minutes called New Hope.  It boasts lovely shops and good restaurants.  I knew I wanted to give my fictional town some proximity to an interesting city, but it also needed to be in a part of the world I understood easily –hence, “Quaker Hills,” my writerly spin on New Hope.

I love your characters – many of them quite quirky – but I’m most interested in the grandmother, Maria Pia Angelotta. Is she based on someone you know?

Not at all!  She resembles Anne Bancroft, whose looks I’ve always loved, and she’s got my beloved Aunt Gem’s red satin kimono.  Beyond that, she’s a product of my imagination.

You have written many short stories over the years; four of which were published in Alfred Hitchcock. You also wrote a series of stories, one of which Black Heart and Cabin Girl was nominated for an Edgar. This story is in an anthology now. What is the title and theme of the anthology and where can we find it?

Actually, my story “Black Heart and Cabin Girl” was one chosen by Lawrence Block, who edited the MWA anthology, Blood on Their Hands. All of the stories in the collection are by different writers, some were solicited, some were open to submission by active MWA members (that included me).  Each MWA anthology has a theme, but how the writer interprets that theme is wide open.  So, for that anthology, surprise! The theme was blood on their hands, and “Black Heart and Cabin Girl” is a work about psychological torment in the present about a death in the past.  The anthology is now ten years old, but I think you can still find it online at the usual places.

The opportunity dropped in my lap, where I watched it sit for a couple of days before I signed on.  Adams Media was looking to acquire a book on Poe, timed with the release of a Hollywood biopic.  When I’m wearing my academic hat, I’m an Americanist, and my area of expertise is nineteenth century American lit, so I knew I could do a good job with Edgar.  I wrote the book – loved the work – and. . . .footnote: the Hollywood biopic, a Sylvester Stallone project, has yet to be made.  The Poe book has been good to me and has been an important line item of my writing c.v.

What’s the title of your next book in your Italian restaurant series? When will it be out? Give us a blurb telling us what happens in this book. 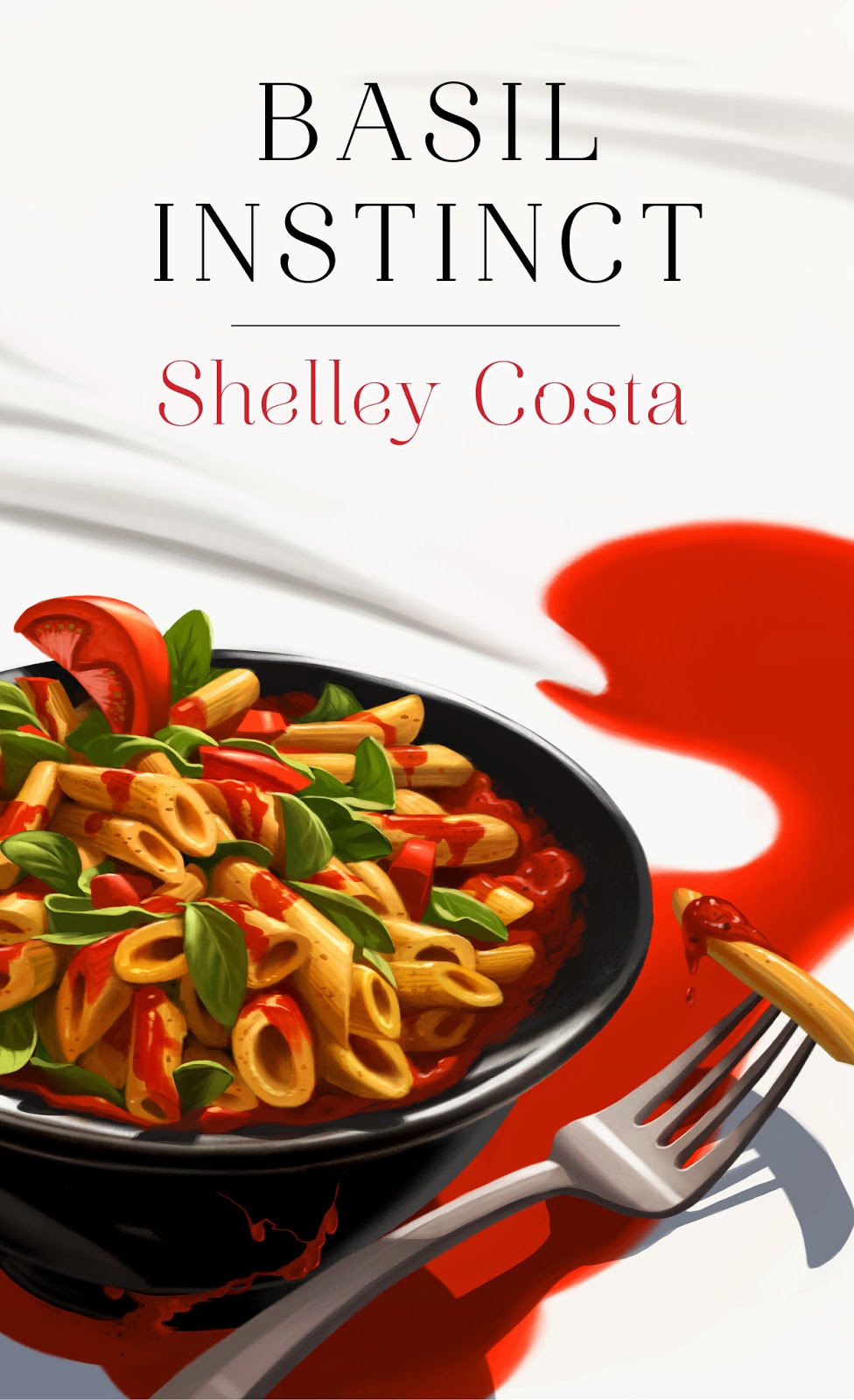 Basil Instinct comes out in June.  I love this book – it still makes me laugh, so I hope readers will join in the merriment.  There are two plot threads: Maria Pia is invited to join a two hundred year old, all-female,  secret – possibly murderous -- cooking society, and Choo Choo, the chef, has talked Eve into teaching a basic cooking skills class at a local career center, neglecting to mention a key piece of information about the students.  When these two plots collide, murder ensues.  Lots of fun!

Now that you’ve written two cozy mysteries as well as many short stories, which do you prefer writing and why?

They’re apples and oranges, for sure, and I turn to each for different reasons.  Humor certainly finds its way into my novels (I figure if I’m going to spend months and months writing, there have to be some laughs), but I work out my “dark stuff” in my stories.  The short story form necessitates getting in and out quickly, obviously, and that kind of intensity works well with the heavy topics I undertake there – the Inquisition, lynching, etc.  And because it’s short, I don’t depress myself too long or hard in the doing!  I will most likely continue to write both.  My next story, “The Specific Gravity of Blood in Sunlight,” comes out in the June issue of Alfred Hitchcock Mystery Magazine.

Do you enjoy cooking all the delicious Italian food mentioned in your book?

No.  I can do a pasta with a nice pomodoro sauce, a tasty linguine with white clam sauce, or a pretty respectable lasagna.  Pretty basic stuff.  Eve’s the cook – not Shelley!  I like easy.  My daughters bought me a snazzy homemade pasta maker for my birthday, so that will definitely up the ante.

Good luck, Shelley, on winning an Agatha. For those of you going to Malice Domestic, Shelley will be there signing her book, and hopefully the second one, too. Either way, you are in for a treat if you read You Cannoli Die Once.

Congratulations on your nominations. I laughed at your titles: well done. Titles are probably the only thing I could do well writing a cozy since I’m a punster at heart. “It’s the lowest form of humor,” sneers the scholar. “True, but at least it IS a form of humor,” I say.

I’ve been to New Hope many times. There be lots of ghosts there – will they appear in your stories?

Your titles make me hungry! Congrats on your success.

These books sound like the ones I like to read. I haven't. I'm ashamed! And my parents grew up in Philly. Friends have told me about New Hope--a wonderful place to spend a few days, evidently. I'll gobble your books next week. Good luck at Malice, Shelley, and I hope to meet you there.

Sounds like a great series. I plan to be at Malice Domestic and will check them out there. Best of luck with the Agatha; being nominated in itself is a huge deal.

What wonderful titles. Good luck with the Agatha and thanks for sharing on WWK.

Great interview. I can tell that Maria Pia is going to be a handful going forward. I'll be reading this series!

Loved "Cannoli" and can't wait to read "Basil." I'm sure it will be just as yummy as the first!

Hi Shelley - your mysteries sound terrific - all the ingredients I like in a novel. And my (northern) Italian grandmother would have approved of your choice of cuisine. Good luck at Malice!

What great titles. Your series sounds like a lot of fun. Best of luck at Malice!

I'm so pleased to know Shelley, and I'm happy she agreed to be interviewed for WWK. Her book is indeed a deliciously fun read.

Oh, Jim, probably not. I've got my hands full with the living characters, let alone possible dead ones!

Thanks, Everybody, for your kind comments on my interview. . .and your best wishes about the Agatha. Please introduce yourself to me at Malice! Looking forward to two and a half days of all things mysterious. . .