Today Salad Bowl Saturdays welcomes author and website designer Karen McCullough. In the past we have had authors who swore by plotting and others who wrote by the seat of their pants. Karen tells us why she thinks the right answer for her is somewhere in between. I'm looking for a lively discussion...

But there have been a few series I’ve gotten addicted to over the years. Crime dramas and mystery series, especially if there is a paranormal angle, have been guaranteed to suck me in, so among my favorites over the years were both The X-files and LOST.

Both series featured intriguing episodic stories, a terrific group of characters, some very good writing (not always, but sometimes) and a continuing plot running in the background that kept me tuning in, week after week, for the next hint at what was going on.

One other thing the two series have in common is that after a while it became lamentably clear that those who ran the show had no idea where they were going with the continuing plots. They’d set up a lot of wildly fascinating questions and possibilities, but as the shows were renewed and extended over a number of years, the plots expanded and it appeared the writers in charge had no end-plan, or if they did, they’d managed to veer too far from it. The guide was no longer relevant by the time either series reached its end. Sadly, the finales of each show proved those suspicions correct.

As an author, and a mystery writer in particular, I have to have an end plan right from the beginning. Even for “pantsers,” authors who write by the seat of their pants, some idea of where you’re going is necessary. It’s undoubtedly easier for the plotters, the people who write from carefully constructed outlines, since they know exactly how everything will work out before they begin.

I firmly believe that if you don’t know where you’re going with the story, you’re never going to get there.

Although I don’t fit either category of author perfectly, I lean more toward the seat-of-the-pants side. I tend to start a book with the opening scenes clear in my mind, a rather misty idea of what happens next, but a pretty strong idea of where the story is going and how it will end. It’s getting there that’s fun, and what I discover as I write beyond the opening scenes. Without some idea of the destination, though, moving forward is more likely to mean going in circles or haring off in too many directions at once.

Most of the time, my stories move along until they get to the planned end. Almost always there are surprises along the way, but it concludes as I intended.

Sometimes the unexpected happens. As I was writing A Gift for Murder, I was sure I knew who the murderer would turn out to be. I was wrong. About two-thirds of the way through, I realized that while I’d set things up for one person to be the guilty party, everything I’d done until then could point another way, and it would make much more sense as well as being a bit less obvious.

But that wouldn’t have been possible if my story hadn’t already been trending in a certain direction. I knew the series of events that had led to the murder, and that still held true. I did have to go back and revise some details of the story in light of the change, but not in a major way. A few things had to be foreshadowed differently and one bit of evidence added to make the ending I now had seem logical and inevitable. 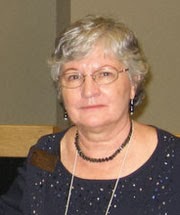 Karen McCullough is a web designer by profession and the author of a dozen published novels and novellas in the mystery, romantic suspense, and fantasy genres as well. She has won numerous awards, including an Eppie Award for fantasy, and has also been a four-time Eppie finalist, and a finalist in the Prism, Dream Realm, Rising Star, Lories, Scarlett Letter, and Vixen Awards contests.

Her short fiction has appeared in several anthologies and numerous small press publications in the mystery, fantasy, science fiction, and romance genres. She has three children, four grandchildren and lives in Greensboro, NC, with her husband of many years. Her most recent release is the ebook version of A Gift for Murder, originally published in hardcover by Five Star/Cengage and mass market paperback by Harlequin Worldwide Mysteries.

I don't outline but I do have a timeline for events. I've watched a movie in which a character who was murdered shows up in the background after she has been killed.

Lisa Cron recently wrote a blog on Writer Unboxed that I thought brought an interesting point of view to the plotter vs. the pantser debate. She contents that books should be organized by the main character's internal struggle, using major emotional changes as plot points.

I don't really know how anyone writes well without using all techniques. No one can write a book purely to outline because the narrative would be wooden and prescribed. Writing purely by pantser style would require so many revisions, you'd have to rewrite the entire book. Using Cron's method may work for a literary book if the main point is the MC's emotional twists and turns, but mystery readers want more.

Somehow all methods should be combined--I try, but writers need to use whatever works for them.

I am coming to the conclusion that whatever works for a writer is good and if it doesn't they should try something else.

In draft one I am a pure pantser. I start somewhere, the characters drive the story. I get to an end.

In draft two I directly apply character arc, story structure, layers etc. now that I understand what the story is really about.

It's sloppy, but seems to work for me as long as I give it time -- which is one reason I won't be those writing three books a year.

Before I start I know my murderer and what he/she feels is important enough to murder for. From then on I'm mostly a pantser. I do keep a written record as I go along a brief few sentences what went on in each chapter and what characters were involved so I can keep track of what character needs to return, etc. But like Jim mentioned, whatever works for the writer - as long as it works - is the best way to write.

Thank you for a fascinating interview. I think each writer needs to find what works for him or her, but by the last draft, very definitely should have in mind how the whole thing ends.